Conservatism Is Not A Suicide Pact

Kurt Schlichter
|
Posted: Aug 28, 2017 12:01 AM
Share   Tweet
The opinions expressed by columnists are their own and do not necessarily represent the views of Townhall.com. 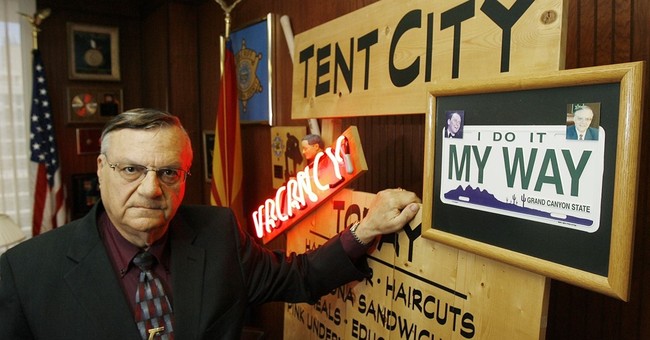 The whiny wailing and rending of garments (mostly bow ties) by the True Cons over President Trump pardoning Sheriff Joe Arpaio brings to mind another president’s choice when a loyal supporter was the victim of a liberal witch hunt. President Bush was an honorable man, but the way he allowed Scooter Libby and the Libby family to be ruined and impoverished over what everyone knew was a skeevy liberal political vendetta before issuing a partial commutation is to W’s lasting shame. His excuse: the Rule of Law or something.

But, as anyone willing to see knows, today the Rule of Law is a unicorn and it has been for a long time. I like the Rule of Law, and I’ve been warning for years about what happens when it goes away. Yet we are where we are, whether we like it or not. We’re in a land where the law is only intermittently and selectively applicable. Allowing allies to suffer in an effort to pretend that all is well is not going to bring the Rule of Law back. Nostalgia for the Rule of Law no excuse for tolerating an injustice to an ally. Hell, undoing injustices is what the pardon power is for.

What will bring the Rule of Law back? How do we get to the Conserva-Eden we are expected to act like we already reside it? Perhaps another statement of principle? Maybe another post on some unread conservajournal? I know – how about more complaining about how frustrated conservatives are uncouth and should just sit there and take whatever fascist garbage the left dishes out?

I always thought it was conservative to punish wrongdoers. The other side abandoned the Rule of Law, so I would think that they might – maybe – learn a lesson by experiencing the consequences of their bad choice. But apparently punishing wrongdoers is now off the table because some other principle, of which I was unaware during nearly four decades inside conservatism, requires we never ever retaliate.

You know, I’m not sure that’s a thing. And I have to say – it’s tiresome getting Rule of Law lectures from people who are perfectly happy to have the president ignore immigration laws that they don’t dig.

So, my finger-wagging True Con friends, what’s your plan? How do we go from liberals abandoning the Rule of Law, and such ancillary and associated components of a society based on liberty like free speech and free enterprise, to a liberty-based society operating under the Rule of Law? “Elect more True Cons!” isn’t a plan; it’s an aspiration, and not much of one. I don’t need another cliché, or another citation to general principles, or some variant of my new favorite, all-purpose get-out-of-having-an-actual-plan-free card, the old “We’re better than this” line.

My plan is to cause the left so much pain by applying their new rules to them that they give up trying to grind their Birkenstocks into our faces forever. Yes, as a practical matter that means allying with President Trump, guy I formerly criticized in detail and without restraint, and who was my 16th of 17 choices in the primary (Jeb! was last because he’s an insufferable wuss and I won’t suffer him).

See, I reject the notion we are ever somehow morally obligated by conservative principles to lose to liberals. If I have to swallow something awful, I’ll take half a loaf any day over an entire loaf of liberal dung like Felonia von Pantsuit. I think the new rules are terrible, and they are antithetical to everything I’ve worked for since before many of my Fredocon critics were a tinge of regret growing in their mommies’ bellies the morning after. But I refuse to sit back and allow libs to be victorious because I won’t dirty my hands fighting fire with fire. If that makes me not conservative enough for some, I can live with that. I can’t live with leftist tyranny.

So, now you True Cons know my plan. It might work, it might not. But it’s a plan. Now, what’s your plan to achieve that conservative utopia you keep talking about? Let me lay out the situation straightforward from here in three steps:

Come on, lay it out. In detail. Feel free to tweet it to me! But I want a plan. No clichés, no citations to Burke, no airy statements of general principle. A plan. Lay it on me. Step Two - what’s your plan?

Hmmmm. See, I don’t think you True Cons really have a plan.

Abstract principles are not a plan. A couple weeks ago I wrote about how, now that the tech companies that dominate the flow of information and discourse in our society have decided to insert their politics into their businesses, we should use our political power to ruthlessly regulate them back into neutrality if they persist. It’s an awful idea, in principle, and I’d like to avoid it. But I’d also like to avoid conservatives being utterly banished from the internet.

What was the True Con response? “Free enterprise, blah blah blah.” Yeah, okay, got it. I sure appreciate the 411 on this newfangled “free enterprise” thing. (I should totally learn about it – thanks, 22-year old marketing major with a subscription to The Weekly Standard!) Lots of cant, but no concrete, coherent solutions. My favorite was the guy who suggested the solution was to start my own Google in my garage, except my garage is full of junk. Oh, and by the time we collected a few billion in capital and built an entire new tech mega-corp that somehow escaped being smothered by Google as we grew, every search on Google would return a link to something approved by Hillary Clinton.

I think you want to rely on the power of conservative ideas and sort of hope they spontaneously erupt into a conservative paradise via a right wing Big Bang without you actually having to fight for them. After all, fighting is messy and unseemly, and you also have to ally yourselves with … those kind of people, if you know what I mean, and I think you do. It’s so embarrassing having to explain them to your liberal peers. Many of these misbegotten normals are baffled by fancy sandwiches and stuff.

Before you give me more grief for allying with the Republican in the White House – you know, that guy your party elected – I’m going to need your plan. See, we need real solutions, and my solution is fighting back hard and ruthlessly. I say make our enemies feel the pain they would inflict upon us because it might change their behavior – again, there was a time when conservatives believed in punishing wrongdoers. I also support fighting back because it denies them victory and dominance over us – do you have any illusions that Hillary Clinton and her pet Supreme Court would not be imposing/upholding “hate speech” bans that would silence anyone to the right of Angela Davis if we had not blocked her with Donald Trump? And I also support fighting back because you cannot simply sit back and allow yourself to be repeatedly beaten and humiliated without utterly destroying your side’s morale. Denying the enemy the head of Sheriff Joe had tangible value beyond its substantive justice (Jury? We don’t need no stinking juries to put an American citizen in prison!).

I’m looking for a plan, not another lecture, not another mournful dirge to my lack of True Conservativishness, not another spittle-flecked outburst from some nepotism-pumped hack whose influence has recently waned after years of ineffective “conservative leadership.” We have Trump, and at least he’s not Hillary. At least we aren’t actively losing, and we’re even winning occasionally. If you have a better idea, then stop sitting on the sidelines complaining and share your plan. The rest of us, the ones out on the field with dirt under our fingernails, are awaiting your insights.