We Must Elect Senator Kid Rock

Kurt Schlichter
|
Posted: Jul 20, 2017 12:01 AM
Share   Tweet
The opinions expressed by columnists are their own and do not necessarily represent the views of Townhall.com. 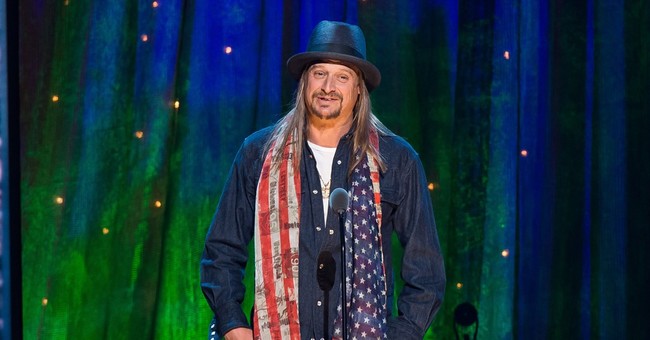 The news that Southern-fried rock/rapper Kid Rock will be running for some timeserving Dem hack’s Senate seat in Michigan should make every normal American smile and spill a 40 to his homies. The future Senator Rock deserves your eager support for two critical reasons: First, it will drive the liberals insane. Second, it will make George Will and the rest of Team Fredocon soil themselves.

No, he didn’t go to some Ivy League snob factory and all he’s got to rely on are attitude, common sense, and a love of actual Americans (especially our troops). But wait - you want “conservatism.” A fat lot of good your version of conservatism’s done us. It’s always waiting up there ahead, just after the next election cycle, and in the meantime, we’ll compromise and make some more excuses.

No, we’re past voting for the ideology. Now we’re ready to vote for the id.

We’re woke, and we want a devil with a cause. Lying GOP worms like Rob Portman and Dean Heller and whoever that jerk is from West Virginia stuck a stake in pseudo-conservative ideology’s already-dying heart when they started tap dancing the second they got the opportunity to vote to repeal Obamacare while we had a president who would actually sign the bill. Up until then, the people Conservatism Incorporated had vouched for had looked in our faces and lied.

Now, we can look in their faces and say, “Kid Rock’s in the House and that's where [he’s] at!”

Okay, technically the Senate. Which is probably good, because you know he’d slap Paul Ryan and make him cry.

“You can’t be serious!” Kid Rock over some Democrat, or whatever lying sack of fraud the More Con Than You-cons have been selling us?

Conservative Incorporated sold us a bill of goods – oh, not all of them, but enough of them that there’s no more benefit of the doubt for the Republican Party. Let’s be really clear – most of the GOP Senate crew was ready to pull the tab and chug the beer of repeal. That’s good, and why we need to avoid playing the “I HATE THE WHOLE GOP! WAAAAA!” game the Democrats and their media catamites are pushing to dishearten and discourage us. No, we’re not falling for it. We don’t need to give up. We just need to purge the party of the squishes. We still have about a dozen or so liars who played conservative at home and bipartisan trough hog back in DC. And they need to be kicked to the curb.

This crisis is not of The Donald’s making; this is a failure of insiders, not of outsiders. The tunnel vision Never Trumpers can’t put this repeal treachery on Trump, though they’ll try. To them, everything is Trump’s fault – their irrelevance, their dandruff, their inability to perform as men. No, this was a betrayal of real conservatives by alleged conservatives in good standing, big talkers about liberty and free enterprise who were happy to take our votes but even happier to burrow into the Washington scene and suck it dry like the ticks they are.

These were the grinning creeps who sat on Heritage panels and reaped the praise of the American Enterprise Institute and who, when the time came, turned out to be liars.

These were the people who kept shaking their lying heads at how uncouth Trump is. At least Trump – and Kid Rock – never lied to us about who they really are.

I am not shocked. You shouldn’t be either. Like every movement, conservatism has attracted its share of grifters. Look at the careers of Bill Kristol and John Podhoretz – thanks, Dads! Their magazines are just more useless appendages of Conservative Incorporated. Their purpose was never to put conservative policy into place. No, they are donor bait whose purpose is to allow their proprietors to maintain their mediocre positions in the DC/NY milieu. When the time to make a hard choice came, they easily made the choice of Felonia von Pantsuit, happy to leave us normal Americans to her tender mercies knowing that having liberals in the White House meant bucks and attention for them.

They are horrible people who always held us normals in contempt, and they’re now so angry they are forgetting to fake respect. The other day, when the president was showing off American-made goods in the White House, Kristol sniffed “Maybe it's just me, but I find something off-putting about turning the White House into an exhibition hall for American tchotchkes.” Maybe it’s just me, but if I were one of these nepotism poster boyz I would at least show some respect for Americans whose parents didn’t hand them a ready-made career.

They’re nothing now, and it gnaws at them. So just think of them seeing Kid Rock get the power and position they covet. We cannot waste this opportunity to watch them turn purple with fussy rage.

Which brings us to the criticality of attitude, because one fact remains indisputable. Attitude doesn’t lie. We’ve just seen a graphic demonstration of how the GOP hacks can easily fake ideology. But attitude? That’s almost impossible to fake.

Tell me more about how all Donald Trump has is raw opposition to everything Democrat, how he has no firm ideology of his own. Yeah, and so what? Raw opposition to our enemies sure as hell beats faked ideology that suddenly vanishes whenever it’s in danger of actually being implemented.

I keep hearing how true conservatism will do this and that and blah blah blah. Yeah, most of the GOP senators are solid, but enough aren’t that you finger waggers need to lose the attitude. The people the establishment held up as serious policy wonks who put that alleged policy illiterate Donald Trump to shame turned around and stabbed us in the back.

I’ll take Kid Rock in a heartbeat over what you’re selling – he’s a cowboy, baby, and he’s thrown a punch and taken one. He’s not going to lie to you about devouring think tank white papers and how we’re really absolutely totally going to do all that great conservative stuff if only we had the House and the Senate and the presidency and unicorns romping through the streets.

So, Kid Rock for Senate 2018. His campaign slogan should be “You’ve done a lot worse,” because we have. Sure, maybe he’ll “Start an escort service for all the right reasons/And set up shop at the top of Four Seasons,” but at least this time we will have elected a pimp instead of another ho.