Kurt Schlichter
|
Posted: Jun 01, 2017 12:01 AM
Share   Tweet
The opinions expressed by columnists are their own and do not necessarily represent the views of Townhall.com. 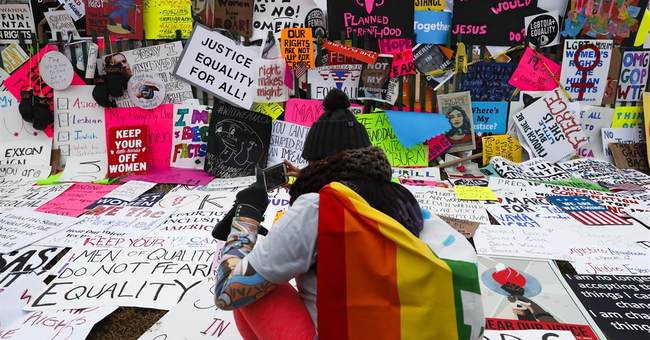 Name one normal person who has watched the leftist freak out and said, “Yeah, I’m convinced. That severed Trump head Kathy Griffin is hauling around? Really makes you think.” It sure does – normal people think, “Thank you, Lord, for helping America dodge that drunken, malignant bullet the liberals fired at us.”

But then nothing the liberals have done since last November’s humiliation has sought to expand the Democrats’ constricted base to include us normals. Instead, everything they have done seems designed solely to appeal to the coastal snobs and welfare cheats who are already committed to liberal fascism, and to demonstrate to everyone else how right we were to reject that pant-suited Chavez wannbe.

When you watch what they’re doing in response to normal Americans standing up and asserting the right to govern ourselves, you see the progressives making the losers’ choice at every turn. From concocting elaborate Russian fantasies – I keep expecting someone to demand Trump make Moscow General Hospital release his original birth certificate – to applauding performance art designed to make regular people gag, they choose wrong. And we can safely point this out because they’re too smug and/or stupid to listen.

This has been going on for a long time. A few years ago it was their collective swoon over the scuzzy shenanigans of the filthy lowlifes of what they called the “Occupy Movement.” But that Astroturf farce was only a “movement” to the extent that progs imagined that footage of its coterie of clowns executing bowel movements against cop cars was going to win over normal people.

Okay, that didn't work, so the next brainstorm was to decide to refuse to recognize the results of the 2016 election – no doubt the people who left the Democrats would be convinced to return to a party that has made its centerpiece #TheResistance to what those voters voted for. And how better to appeal to the regular folks who chose Trump over Felonia von Pantsuit than, “Why, let's have thousands of hideous crones wearing hats evoking genitalia march around talking about how working class men are bad.”

Yeah, no. That failed too. Have you seen any v-caps lately? Gyno headgear is now “La Macarena” of political novelty acts.

When wearing lady parts on their pointy skulls somehow didn't make normal Americans think, "These are sane people and I should take one of their brochures to learn more about their political teachings," they got onto the Russia kick. It was sure great to see liberals finally taking the side of the USA against Russia for the first time since, you know, ever.

But these born-again, left-wing McCarthys, without Tailgunner Joe’s trademark sanity or smarts, have somehow managed not to turn normal Americans into a mob demanding impeachment. It didn't help that the Russia-mania media reports are always 99 percent baloney. Anonymous bombshells like Trump planning to give Putin our missile codes in order to nuke Planned Parenthood always end up being walked back to something like, “Donald Trump once watched Rush Hour 2 on pay-per-view and totally laughed more at Jackie Chan than Chris Tucker because RACISM!"

But Russia spazzing doesn't create jobs, and it doesn't address the underlying issues that led people who could've been voting for Hillary to diss her. So, especially after 12 months with no leaks of damning evidence and the reluctant admissions even from leading Democrats that there is no evidence of TRUMP LOVES PUTIN BECAUSE TREASON! at all, damning or otherwise, no one cares who wasn’t already offended to the core by normal people daring to make themselves heard last November.

And having that insane political Sasquatch wandering out of the woods every once in a while to insist that she actually won the election does not help. Which is why we should heartily encourage her to continue her bizarre quest for the presidency. Who knows, it might just work – she does finally win in 2020 in the new prequel to my novel People’s Republic, Indian Country, and promptly destroys our country just as we feared she would had she not been so humiliatingly crushed.

Lately liberals have tried some new tricks. One is feigning a newfound dislike of violence. A Republican smacking around a liberal reporter is the worst thing on earth. Then the aforementioned Kathy Griffin rises from her cesspool of obscurity with a pic of her holding Trump’s bloody noggin in eager expectation of liberal acclamation because, well, Trump.

Nobody's buying it (including, to her credit, Chelsea Clinton).

Fun story: As a young lawyer in a big LA firm 20+ years ago, Kathy Griffin came in as a temp – that was before she hit it mediocre. I remember talking to her once and she was pleasant enough, but little did I know someday she’d be both on CNN and channeling ISIS.

Then we had the latest liberal Great Right Hope failure when that jerk in Portland turned out not to be a conservative (They never are) but a Sanders supporter. Regardless of his politics, we normals still want him to feel the burn … in the electric chair.

The funniest liberal pose is “Patriot Liberal,” and that's their newest thing. They'll start talking to you about honor and patriotism and Country First and the flag, but they do it hilariously awkwardly, like how a slow child walks for the first time. They’re just not used to taking America’s side – or, more accurately, pretending to.

But none of it's working. The numbers are not shifting. Donald Trump remains about as popular as he was on Election Day, and leftists isolated in their coastal echo chambers just don't understand that normal people really don't get upset when our president tells the deadbeat Germans that before they spend their money on rape-inclined foreigners they need to keep their word to the people whose blood and treasure defends them. If you think the American people are going to be upset because the Euros are pouting about Donald Trump demanding that the Krauts ... wait for it … pay their fair share, you've probably never met a real American.

Apparently, only rich fellow Americans must “pay their fair share.” Rich, liberal globalists from other countries who buy into the climate change scam, well, apparently they get a pass on paying their fair share. Liberals always do “Country First” wrong.

It used to be easy to feel like we were losing with all the noise and lies in the media, but not so much anymore. We are woke to the okey-doke; we know we’re supposed to be the marks and we just aren’t playing along with the scam. We get that the media lies. We get that liberals’ only concern is their own power. And now we’re laughing at them.