The Teflon Don Grinds Down #TheResistance

Kurt Schlichter
|
Posted: Mar 16, 2017 12:01 AM
Share   Tweet
The opinions expressed by columnists are their own and do not necessarily represent the views of Townhall.com. 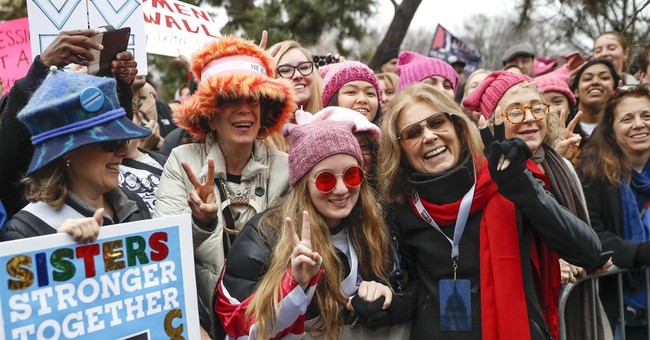 History will record that once upon a time there was something that called itself #TheResistance, and it was President Trump’s bestest buddy because it provided him the cover to ruthlessly dismantle everything Barack Obama and Team Libfascist tried to build. Whining, virtue signaling, and figuratively choosing to die on strategically insignificant hills while dressed like lady parts; these were its methods. Yet instead of defeating him, it only made Donald Trump stronger, and helped ensure his crushing of its members’ liberal dreams.

See, the problem for #TheResistance is that it is composed of stupid people who think they are smart people, parochial bigots who consider themselves open-minded cosmopolitans, and meritocrats who really didn’t merit anything except contempt. They refuse to see that their hero Obama left in his miserable wake a country on the verge of being torn apart, and a teetering legacy built of wishes and fraud that is collapsing before our eyes. When Trump is done, it will be like The One had never even been there. History will label Obama “The Zero” – zero accomplishments, zero achievements, zero return on America’s eight-year investment in fake hope and change for the worse.

All that will remain of President Obama’s reign, besides a few cheesy biographies straining to place him up there with those real presidents on Mt. Rushmore, will be the lingering stench of his utter failure.

Every day Trump gets stronger; every day #TheResistance gets weaker – and more embarrassingly pathetic. One by one, these liars’ memes are falling apart. One by one, the Obamacronies are being dismissed from their D.C. sinecures and replaced with competent patriots – a nice change from the last eight years of rule by a pack of smug, genderfluid

Savor their pain as their hopes for some sort of deus ex scandalabra rescue from Election Day’s cruel accounting crumble, leaving them with nothing but ashes and the certain knowledge that every regulatory power grab and legislative ploy they thought was locked-in is going to be herded to the kill floor and converted into hamburger. Make mine animal style, with a side of the free market and a tall, icy glass of liberal tears.

Say goodbye to the regulations that impoverish our miners, to the codes that skyrocket our electric bills in the name of the weird liberal weather religion, and to rules declaring that puddle in your backyard one of the “waters in the United States” and allowing some bureaucrat with a clipboard and a sneer to tell you where you can and can’t build a tool shed. Slowly but surely, it’s all going away.

Every day, the Trump administration gets stronger, more embedded, and does more damage to liberals' dreams; every day, the liberal elite gets weaker, less relevant, and more ridiculous.

Their organized system of lies and deceit is expiring in front of us. Sure, the whole Russian thing was fun while it lasted – a bunch of vague allegations ultimately shot to bits by James Clapper after Trump forced him to either ‘fess up that it was phony or admit the Obama administration was Watergating all up in there. Look, I – and a lot of other folks – are absolutely convinced the Obamaites either hard-tapped Trump’s comms or illegally accessed whatever was swept up by the NSA (which, according to the myriad leaks and defectors under President Faily McWorsethancarter’s watch, is everything). But proving that in court doesn’t matter; what does matter is the “Don + Ivan, sitting in an onion dome” meme is now a smoking crater, a nutty theory on par with chemtrails, UFOs, and the idea that Lena Dunham is hot.

Donald Trump: Doing the job the catamite media won’t do.

Let me be perfectly clear, to quote someone who I can’t seem to remember anymore: it’s all caving in on them. Look at St. Preet and the 86ings of Obama’s ambulance chasers. Any news report that did not begin with something like “Donald Trump demanded the resignations of all Obama U.S. attorneys today, something every single new president does every single time…” was a hack lie and just more dictation taken by eager Democrat partisans. You never got that baseline truth from the mainstream media – you only got it from the alternative and social media worlds. The bad guys can’t contain the truth anymore – the news is going to get out no matter how hard the media tries to contain it. And now, everyone knows their game.

You can hear the Brian Stelters and Chris Cuomos and all the rest of these rump-nosing weasels howling in agony as all the power and glory they struggled to achieve turns to dust. Imagine – you work for years, struggle and toil, then finally get your own CNN show, and now that you have it all you get is grief from jeering conservatives tweeting memes comparing you to Baghdad Bob. The media mediocrities are nothing but a joke now, a whiny, silly joke: “So, Rachel Maddow walks into a bar with a safety pin, a genital beanie, and a tax return...”

No one’s listening, no one’s caring. The Nancy Pelosis and the Chuck Schumers can bunt the softballs their lackeys loft at them 24/7, and the needle just doesn’t move. No one’s watching.

But it gives Trump cover, the cover he needs to be ruthless. When you go at a guy like Trump locked and loaded, with the volume turned to 11, howling for blood, then you can’t expect him to ask for, or give, quarter. Softboy Jeb would’ve folded and whimpered under your onslaught, sobbing and begging to submit, but not Trump. He fights, and you fools left him with no choice but to go for your throats or lose. You made it a cage match, the Thunderdome, so that’s how he’s fighting. Two men enter; one man leaves. There’s no room for mercy – you saw to that – so your beloved liberalism won’t get any.

You gave Trump the excuse he needed to be the most conservative president since Calvin Coolidge, and now he’s doing it. He couldn’t not do it – you left him no way to compromise, and you made sure that any act of magnanimity or graciousness would be rejected. Even if he wanted to moderate his policies, that would just create an opening we all absolutely know you would exploit. So there won’t be any détente with the liberal elite, no peace accords with the snooty left.

Thanks #TheResistance. You made it do or die, so enjoy it when this guy picks “do” for conservatism, and “die” for liberalism.