Kurt Schlichter
|
Posted: Mar 13, 2017 12:01 AM
Share   Tweet
The opinions expressed by columnists are their own and do not necessarily represent the views of Townhall.com. 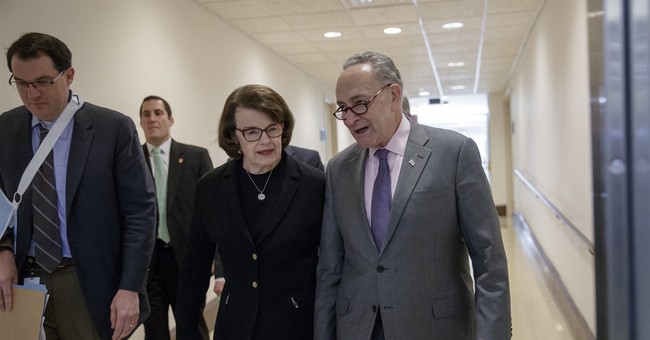 As Donald Trump triumphantly passed his 50th day as the President of the United States Who Is Not Hillary Clinton, Democrat leaders secretly gathered to survey the smoking wreckage of a party that was supposed to dominate America for a generation and ended up only dominating it until midnight on November 8, 2016.

Chuck Schumer approached the podium to address the gathering, his voice a bit hoarse from his recent phone call "thanking" Harry Reid for the Reid Rule.

“We need to be honest,” said Schumer, to widespread laughter. “No, no, I mean with ourselves. Come on, get real – what did you think I was saying? Anyway, we need to take an honest look at the aftermath of the Obama administration and how it left the party weak and…”

“Yes, very true. I acknowledge my pallor and phallo privileges,” Schumer replied, placating the two chairs of the Democrat Jewish Outreach Committee. “I mean, of course Obama left our party in terrific shape. We Democrats are stronger than ever. Sure, we lost the White House, but it wasn’t because of Obama or Hillary. It was, uh … the Russians …”

“So, so true. And we didn’t lose Congress during the Obama era. We simply became more…elite. More selective. And all those lost seats in the Jesusland states? Maxine, your thoughts?”

“We all acknowledge that Obama was a huge success. That fact is beyond debate, like global warming and that men can become women just by wanting to. But now we have to protect his greatest achievement. Nancy, you’ve spearheaded our Save Obamacare working group…Nancy? Nancy! You can watch the squirrels play later.”

Nancy Pelosi turned back from the window and stood up to address the assembled Democrats. “Our working group reviewed the new Republican health plan and we can't find anything wrong with it. It still gives free stuff to people who don’t want to support themselves, so I’m kind of at a loss at how to criticize it.”

“Put your damn shirt back on, Marty,” Chuck Schumer yelled. “I’m not telling you again!”

An elderly, angry-looking woman stood up. “I’m a journalist, and I’m only here as an objective observer,” Andrea Mitchell said. “But it’s obvious that the Trump administration is Hitler reborn and we must work together to destroy it.”

“Hear, hear!” said the CNN contingent as one. Keith Ellison furrowed his brow, whispering to Maxine Waters, “Wait, is she saying Hitler was bad?”

Pelosi piped up again. "It seems very clear that the key to Trump’s success was hats. Many, many hats. The poors love hats! So we need hats too, and they should have a catchy message, one that sums up where we stand as liberals. Trump has red ones that say ‘Make America Great Again,’ but ours should be blue and say ‘America Is A Cesspit Of Racist/Sexist/Transphobic Hate Crimes Thanks To You Jesus-Hugging Idiots, So Submit To Our Commands.’”

They loved the idea, but Pelosi's slogan wouldn't fit; the hats, made in Mexico, would read “Obey Us, Peasants.”

“This innovative headgear will go a long way to reaching the Christian, gun-loving, job-having America-liking dummies we need to convince to vote Democrat in 2020!” said Democratic National Committee Chairbeing Tom Perez. “I can ask Chelsea to wear one and maybe get some favorable press coverage!”

“There’s no ‘maybe’ about it!” replied the CNN contingent as one. “Breaking news, here we come!”

But not everyone was pleased.

“Noted!” Schumer said, “Now, we will hear from our Native American caucus."

“I hate Trump more than I hate John Wayne!” roared Elizabeth Warren. The crowd murmured at her impactful premise.

“As my people often say, during times of trouble, the Great Bear Spirit inspires braves and squaws alike to resist and…persist.” She winked. The crowd clapped politely.

Chuck Schumer rolled his eyes. How long was Big Chief Talking Bull going to milk that line? Plus, he still resented having to show solidarity by getting a “She Persisted” tramp stamp.

“There’s our 2020 nominee!” said Tom Perez. “An elderly, condescending leftist woman from the Northeast – how can that possibly go wrong?”

“Our path is one of obstruction,” Warren said, gesturing broadly with her dainty professor’s hands. “It worked for the Republicans when they obstructed Obama from doing things that the people did not want done, and it will work for us obstructing things the people do want done…hold on, I think I got that backwards. We should obstruct…uh…hmmm. Wait, I hear the wind calling and I must answer!” Warren darted out of the hall.

Bernie Sanders stood up. “Has anyone seen my shoe? I had my shoe when I came in and now it’s gone. It was a brown shoe and now I can’t find my shoe.”

Nancy Pelosi rose to speak again. “As a San Francisco Democrat, I don’t think anyone can compete with my understanding of the poor people I fly over every weekend. Somehow, we’ve lost touch with our roots among the working class Americans who made America –“

"Precisely! But since we’ve ruled out the possibility of secession for now since we don’t believe in guns and not having food, we need to get these knuckle-draggers back on the plantation and the best way to do that is by leveraging the influence and star power of our friends in the world of entertainment and pop culture. And who better connects with normal, working Americans than our next guest? Ladies, gentlemen and otherkin, please welcome Lena Dunham!”

“Hi everyone!” said Dunham, who was wearing a pink knit genital beanie and a $2,000 crop-top designer t-shirt that read, “Your Penis Is A Hate Crime.” “I’d like to start off with a little story about me and my smoking hot sister…”

“Thank you, Lena Dunham!” said Chuck Schumer. “Look Lena, there’s a table full of muffins. You can go have a snack and a chat with Michael Moore. Okay, now we have a surprise for you, a very special guest, the woman who won the popular vote and therefore should be the president except for the Electoral College –“

“Which is racist,” said Maxine Waters.

“It sure is! I am proud to introduce President-select Hillary Clinton!” The crowd clapped politely as Hillary staggered to the podium, spilling some of her Crown Royal.

“Donald Trump thinks he’s so smart!” she yelled, putting her tumbler on the podium and gripping it for support. “Well, let me tell you something. I’ll tell all of you something! I won New York and California by a lot! Of votes! A lot of votes!” She took another sip and the clink of the ice cubes echoed across the room. “And Bill, oh, he’s soooo supportive. ‘Oh Hillary, don’t worry, it’s all right.’ But where is he every night? With his tramps! And another thing...”

“Shut up, you lizard!” Hillary shouted, taking another swig. “That shoulda been me in the White House! Me! It was mine! You promised me!” she shrieked, pointing a boney finger at the CNN contingent. The CNN contingent as one hung their heads in shame; Don Lemon mouthed the words "Forgive me."

“And I woulda shown those Trump-voting jerks! I’d have shown all of them! They’d have paid! They’d have to do more than just bake cakes if I was president, and it wouldn’t have just been she-males tinkling around their daughters! But you know why I really lost?”

“Yeah, racecars and agoraphobia, but mostly sexism! I’m a girl, you know! Not like Bill says, with his tramps! Well, two can play at that game! Come on, O’Malley, get that Van Heusen off and dance for me! Dance for your First Woman President!”

As Schumer helped Hillary away from the podium, Tom Perez took over and smiled. “We’re so totally going win in 2020!”