Kurt Schlichter
|
Posted: Mar 02, 2017 12:01 AM
Share   Tweet
The opinions expressed by columnists are their own and do not necessarily represent the views of Townhall.com. 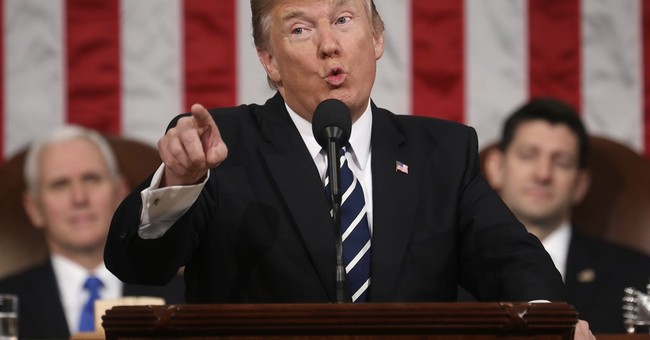 This much is clear – if President Trump (Oh, how I love the sweet agony just uttering those syllables causes annoying people) fails to keep his word, he’s toast. And he should be – we’ve spent decades being lied to, bamboozled, and swindled by both fork-tongued liberals and fake “conservatives.” There’s no more slack to give; we’re done with leeway and wiggle room. The president has two choices: Keep his promises, or fail disastrously. And it looks like he’s going with the former and winning.

Your joint address killed, Mr. President. By coming in there cool, collected, and competent, you reset the chessboard. Pelosi looked like she was going to plotz; the GOP now has tons of footage of white-clad Dems – sans the distinctive hoods of their party forefathers – refusing to applaud for jobs, for cops, for putting Americans ahead of foreigners, and for our troops and Gold Star families. See ya in 2018, suckers.

The Democrats and the GOP squishboyz desperately wanted to oppose a buffoon. Tuesday night, they found that instead they are opposing a president.

America is behind your plan. Even your opposition knows it; the Dem pain was compounded when they let their response be delivered by that guy from Heaven’s Gate. Can you imagine the Crown Royal-fueled tirade in Chateau Hillary? Can’t you just see Bill Kristol the next morning, unshaven and in his bathrobe, wandering through his mansion muttering about how he still prefers rule by the Deep State?

Their pain is fun, but now America expects you to perform. Get it done. And in the process, win yourself another term and go down in history loved by the real people, and unloved by all the right people.

Here’s the thing, Mr. President: Everybody is going to be telling you why you can’t do what you promised to do up there on the dais, and failing that, why you shouldn’t even try. They’ll smoothly offer you reasonable, rational explanations about why you absolutely must break your promises. And they’ll sound good, because lying is what they do. That’s all they do.

Don’t let them do you.

There are a thousand plausible-sounding excuses for not repealing Obamacare. There is one reason why you must – because you said you would, over and over again. The media is going to tell you that you can’t – it’ll wheel out a nonstop conga line of whiny deadbeats afflicted with the sadz because people who actually work for a living are going to stop having to subsidize their effort-free lifestyle. When it does, ask the first question the rest of us would ask: “Well, does Freddie Freeloader have a cell phone? How about a big screen? Is there an Xbox in his apartment? Because if so, then what Freddie really wants is not for us to pay for his health insurance. He could pay for that if he wanted. He wants us to pay for his toys, and the normals are sick of sweating so that some shiftless couch-tater doesn’t have to.”

The media will spaz out. We’ll cheer.

The liberals will go more insane than usual when you dismember the walking corpse that is Obamacare. Just ignore them. You could stop on your way to cure cancer and rescue the kids’ puppies from a burning orphanage and they’d still shriek that you’re the same as Hitler because he liked dogs too.

A bunch of pseudocons in Congress will try and talk you out of it, and if you were weak and stupid, you would listen. But I don’t think you’re either. They’ll whisper, “Oh, we can’t repeal Obamacare because we have to replace it with something that we didn’t bother coming up with in the seven years we spent campaigning on repealing it. Also, some people might show up at our town halls and be mean to us and make us wet our collective panties.”

Reject the cowardly counsel of these gutless femboys – the GOP caucus is the Atlanta Falcons of American politics, perpetually shouting “Hold my Zima!” and then proving that yes, they are, in fact, that dumb. If they are so stupid as to think dinguses who show up in a Louisiana town hall and boo Jesus are anything but leftist plants – because hating on the Lord is totally a Bible Belt thing – then you shouldn’t bother trying to reason with them. Grab a whip and a chair, get on Air Force One, and fly to the district of the wimpiest Obamacare-appeaser you can find, then hold a rally for his primary opponent. If they won’t back you out of principle, make them back you out of sheer political terror. But make them back you. Break them. And get Obamacare repealed.

Don’t expect help from the media making your accomplishments known. Hell, don’t even expect the media to merely not do its job. Expect the media to actively behave as the collection of partisan Democratic hacks it is and try to distract the people from what you achieve when it’s not outright lying about you. Breaking News: “Oh my gosh, Steve Bannon placed his salad fork on the wrong side of the plate! And don’t pay attention to the Ford or Monsanto jobs President Trump saved.”

On family leave, well, I’d prefer you had not made that promise, but you did. On infrastructure, well, not necessarily my cup of tea. But you promised it, and those workingmen Obama and Co. dissed and dismissed want to get out there doing their hard, vital jobs again. You gotta do it – and when you do, you can show them how a pro builds. Obama’s stimulus was giving free money to his progressive parasite pals. Mr. President, fix our roads and you’ll fix the liberals for a generation – in the way a boy dog gets fixed by a veterinarian.

On immigration, keep deporting. Ignore the media and the Fredocons’ wishcasting that you’re on the verge of betraying us whenever you mention you would like to find a solution to the problem. You know, and we know, that amnesty would gut your support. You’d lose us overnight. That’s why your refusal to betray us will fill your opponents with sadness – call their sorrow a fringe benefit.

The days of equivocation and deceit are done. Mr. President, you can either fail to keep your word and go down as history’s biggest loser as our country literally splits apart, or keep your word and be remembered – by the people, if not by the displaced and furious elites you’ve beaten – as the greatest winner since Ronald Reagan.

Come on Mr. President, keep your promises. Make us tired of all the winning.