Kurt Schlichter
|
Posted: Feb 09, 2017 12:01 AM
Share   Tweet
The opinions expressed by columnists are their own and do not necessarily represent the views of Townhall.com. 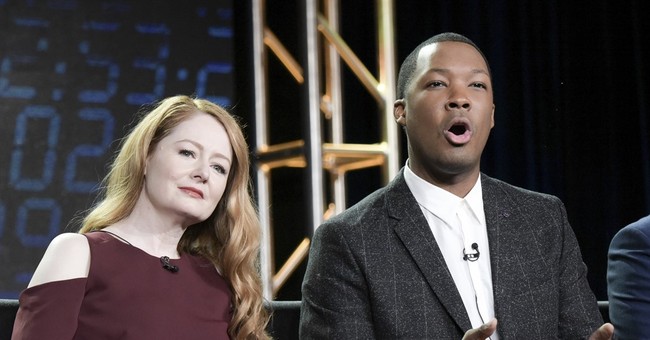 Here’s a crazy idea – I know it seems kind of nuts, but if you are trying to make me watch your show or see your movie, perhaps it might be better not to disrespect patriotic Americans like me.

Sure, it’s hard to believe that the industry that brought us virile superhunk Michael Cera and sexy ultrahottie Lena Dunham could make bad decisions. The geniuses in Hollywood clearly have their fingers on Americans’ collective pulse, if you define “Americans” as everyone in a coastal megalopolis who lives within 50 yards of a cruelty-free organic coffee shop.

Take 24: Legacy, the new Jack Bauer-free sequel to the famed post-9/11 terrorist killing show. Now, the original itself eventually went off the rails as it devolved from being a show about Americans killing evil foreigners to being about evil Americans being evil. And that evil usually took the form of some enormous and inexplicable conspiracy that somehow led to Kiefer Sutherland’s TV daughter being menaced by a mountain lion for some reason.

Like Law & Order, 24 succumbed to the Liberal Preferred Villain Error. In any L&E episode where you have a punk dressed like a gangbanger, you know the killer is actually going to be the suave businessman with the nice Mercedes. Always – just like in real life. And in 24, the evil radical Muslim psycho was always the unwitting catspaw for some shadowy cabal of American capitalists. It got to the point that you watched and muttered “Hey, that guy looks pro-American. He’s in on it.” And he always was – because in Hollywood, the real threat to America isn’t Islamic freaks trying to kill us but guys who seem patriotic.

You know, people like us. Hell, some of us even support President Trump, and you know that means we’re just a trumpet blast away from donning our brown shirts and hoods. The HuffPo said so, so you know it’s true.

Look, if I want to see normal Americans insulted, I can watch CNN. And I don’t watch CNN. But 24: Legacy looked kind of fun and, hoping against hope that Hollywood had learned we patriotic Americans are tired of being dissed, I watched the first episode, which ran right after Hillary lost the Super Bowl.

The show started promisingly enough, with an unflinching depiction of radical Muslim terrorists murdering innocent Americans – it was refreshing to see them willing to depict that gritty bit of realism. But then the show started circling the fake diversity drain with a bigoted leftist agenda that could have been cribbed from a social justice warrior’s rantings at an Oberlin Oppression Studies 101 seminar.

And it’s so lazy and predictable even as it’s racist and stupid. Every straight white male adult not-of-color character has to be a doofus, set up to be showed up by some diversity box-checking Mary Sue Token. How about that generic, vaguely Middle Eastern gal who just showed up at CTU? She’s instantly got the answers Boy Tech who’s been doing this for years doesn’t! And the honky hipster high school teacher? Well, a teen Chechen temptress has him wrapped around her Dracula-accented little finger. Then there’s that Aussie chick who hung out with hobbits in that elf opera? She’ll show head honcho Myron von Mayonnaise, who we know is bad since he fired an unseen Muslim guy because of reasons, some girl power with the stun gun the guards let her carry into the heart of the secure command post! I was shocked that the hero wasn’t a Buddhist lesbian Inuit with a lazy eye.

Actually, the hero was a young black actor who can’t really act but was pretty cool when he was shooting jihadis and yelling things into his cell phone like “We’re running out of time!” and “Get me the schematics of that Burger King!” I sort of wanted to see what happened to him – particularly as far as it involved shooting more jihadis. But then the producer had to go and open his mouth.

"‘I like to say the series begins as if it was written by Trump, but it ends as if it were written by Hillary,’ executive producer and co-showrunner Manny Coto” told The Hollywood Reporter. Wait, did he think that is a good thing?

What was the thought process that led to this guy sharing this insight out loud and on purpose? Is he unaware that at least half his potential audience is against Team Genital Hat? Was he thinking something along the lines of “Well, we really want to appeal to the Hillary voters who like blood-soaked shoot ‘em ups.” Good plan, dude.

But, just in case that comment failed to alienate every single person who didn’t vote for Felonia von Pantsuit, he continued his insanity in the same article:

“But here's the thing: the story of this season deliberately starts on an image that you might call jingoistic, expected and possibly inflammatory . . . The show does not come out on the same end it went in. We overturn deeper truths. There are things going on that we don't understand at first. What at first seems like a kind of straightforward jingoistic event unfolds like an onion into something much different and surprising and kind of sweeps aside the initial impressions that the season begins with. We would be worried if we didn't know where the season goes.”

The “deeper truth” is that this is no longer a world of three networks anymore. We don’t have to accept whatever video slop you decide to serve us. And we aren’t going to. If you decide to insult us, you’re going to pay because we are going to refuse to pay for your dreck in either cash or time. We won’t watch your shows and we won’t see your movies. You can’t dictate to us anymore; we’re in charge now.

Hollywood, what the hell are you thinking?