Kurt Schlichter
|
Posted: Sep 19, 2016 12:01 AM
Share   Tweet
The opinions expressed by columnists are their own and do not necessarily represent the views of Townhall.com. 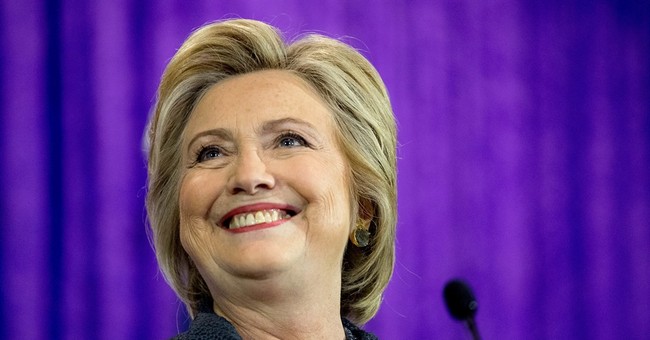 There is one key fact to understand about Hillary Clinton, one unarguable truth that explains all of her terrible policy positions and her dishonest, self-defeating behavior. Everything she believes leads to this conclusion. Everything she does, even the stupid things that have hamstrung her, stem from it.

You’re deplorable. You’re irredeemable. With a wave of her limp, clammy hand, this sick old woman dismisses you from the company of those whose opinions have value, whose interests matter, who have any moral claim to participation in self-governance. You are less than nothing. You are vermin to be, at best, driven from society.

Will Hillary Clinton ever be your president?

No, and she makes no excuses and offers no denials that a Hillary Clinton presidency means the division of the country into those people she considers worthy and those people she does not. Did she visit red state flood victims in Louisiana? No. Sure, she was sick, but she could have powered though a visit, right? Of course, but she chose not to. Why? Because she hates us.

Hillary pushes hateful policies that we resist, even politically toxic ones, because we resist. Do you really think Hillary believes the cause of crime is too many conservatives with AR15s? Do you think Democrat Chicago’s kill count is news to her? She doesn’t care about crime. She cares that we are defying her by our bitter clinging, so she pursues policies to disarm us even though they hurt her politically because she is so driven by hate that she cannot pass on an opportunity to try to humiliate us and bring us to heel.

She lies to us knowing that we know she is lying to us. Sure, it’s easy because she has her drooling pack of rear-sniffing media poodles covering for her every lie. But she lies even when she doesn’t need to. She catches pneumonia; okay, people catch pneumonia and telling the truth might have even gotten her a little sympathy. Yet she would rather lie to our faces than miss an opportunity to disrespect us.

Her hate makes her stupid. Well, stupider – remember, this is the woman who managed to flunk the D.C. bar exam.

And her hate makes her dangerous. If you refuse to bend a knee, if you insist on defying her, if you refuse to play your assigned role as a supporting character in the creepy psychodrama that is her life, then you are worse than nothing. You are the enemy. We’re all the daddy she could never please, the husband who humiliated her, the world leaders who snickered at her ridiculous reset button. Psychologically, she can’t confront them, so her warped mind assigns their wrongs to us. There’s the root of her smoldering hate.

Hey Hillary, we aren’t the ones Richarding bimbos.

But as misguided as it is, her hate is real. She said it herself – the enemy she is most proud of fighting is you. Not al-Qaeda. Not Gadhafi. Not Saddam Hussein before it became unfashionable.

You. Fellow Americans who have committed the unpardonable sin of refusing to submit to her will. And you know it because she has told you again and again in word and deed.

Will the Justice Department check her? No, it will be a club to bludgeon her enemies into submission – and we know who her enemies are, don’t we?

Will the IRS check her? No, the IRS uproar will be not a cautionary example of government gone rogue but a template for the future.

Will the FBI check her? Get real. Comey is too busy counting his 30 pieces of silver while wearing a loincloth made from the pelt of his legendary integrity.

She hates us. We are deplorable. We are irredeemable. And so neither she nor her loyal minions have any self-imposed moral limits on what they may do to us to ensure that we are utterly crushed. Take away our rights? Strip away our livelihoods? Prevent our participation in our own governance? It’s open season on us, all because she hates us.

Except real Americans don’t react well to being told to shut up and slink away while the elite decides how things are going to be. Hillary Clinton is, at this moment, managing to lose to an immensely flawed guy who is essentially a walking, talking middle finger to her and the smug jerks like her who presume to look down on us.

But there is still a good chance that she will slip through, that there will be a President Hillary Clinton. And then all bets are off.

All bets are off because Hillary Clinton is both a hateful woman and a stupid one, and these twin character flaws could well be the wedge that rips our country apart into the red deplorables and the blue, well, plorables. My new novel People’s Republic speculates on where Hillary’s mindless hate might lead our country, and here’s a hint: it is not a happy place.

Let’s hope America chooses the lesser of two evils, and if it instead chooses Hillary, let’s hope I’m wrong about the result. But I fear I’m not. Because one thing is absolutely indisputable.