I Can’t Blame Those Who Will Never Vote For Trump

Kurt Schlichter
|
Posted: Feb 29, 2016 12:01 AM
Share   Tweet
The opinions expressed by columnists are their own and do not necessarily represent the views of Townhall.com. 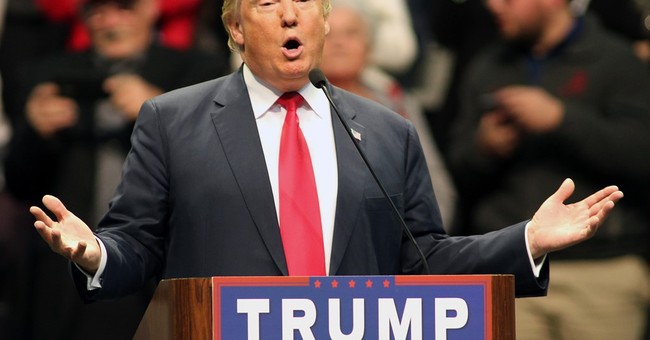 I disagree with those conservatives who say they will never, ever, ever, ever vote for Donald Trump should the GOP embrace his special brand of nonsense and nominate him, but I can’t blame them. Hell, I’m about one more round of foolishness away from joining them.

But not quite yet. Trump is the lesser of the candidates, lesser of the conservatives, but also the lesser of the two ancient socialist evils that the Democrats are eenie meenie miney moeing between. At least Trump pretends to embrace capitalism, of a sort. And at least he doesn’t seem to hate America, just those Americans who aren’t awed by his magnificence.

He’s no conservative, that’s clear. Trump merely mouths conservative ideas, though to characterize them as “ideas” gives them credit for a thoughtfulness and ideological rigor entirely absent from his experience. But Trump is canny enough to know his audience, and he knows what sells –God, guns, and the glory of the good old U.S. of A. And I like all those things. Perhaps he will continue to find supporting those things useful in the future, meaning that with Trump, at least there’s a chance we’ll be able to protect these things. But Der Crusty Commissar and the Bar-exam-flunking, pervert-enabling, pantsuited, liberal fascist harridan are actively against those things and everything else good about America. So Trump is marginally better only because he’s marginally less likely to turn us into a less tropical version of Venezuela.

Yippee. Can you feel the burn?

It goes without saying that the establishment burned us good by ignoring, when not actively lying to, the same folks Trump has now enlisted. Sure, Trump has attracted some cretins, racists and nimrods, though I’ll put his bad apple creepy hangers-on up against Sanders’s Occupier freaks any day in a Battle of the Political Fringies for the Worst People Ever trophy. But most of his followers are just regular Americans who are tired of seeing the country they spent their lives building, feeding, defending, and loving stolen from them by weirdos, losers and gender-fluid mutations.

They are sick of being told what to do, what to think and what to feel – and to shut-up. It’s not only by the left but by our own side – how many conversations have you heard where those folks who didn’t get fancy degrees and who don’t work in a nice, clean office get derided as extras from Deliverance?

But to understand Trump’s appeal is not to excuse him. He’s as faithful to conservative principles as Bill is to Hillary, and when President Trump rethinks everything he has said during the campaign after moving into the soon-to-be-fabulous White House, his followers stand a fair chance of finding that they are now the blue dress.

Still, my assessment is that if he is nominated (which I think is no done deal for several reasons, like his pummeling in the recent debate) we are slightly better off with him than with one of the Dems – and his huge margins among women and Hispanics throw shade on the hope-over-experience notion that Trump can’t beat Hillary. I think he’ll beat her like a drum, and the amusement value of this bizarrely-coiffed charlatan driving the brownshirted liberal church lady nuts would almost be worth the risk to our Republic. But those who assess the danger of a President Trump as too great, well, you’ll get no argument from me.

In 2012, I undertook the thankless task of trying to convince rabid libertarians that they were better off voting for Romney than remaining pure and in their basements. I was convinced I was right, and I was, in fact, right. But don’t look for me to chide my principled conservative friends like Rick Wilson and Erick Erickson when they sit out Election Day. This is a strategic disagreement, and I can’t say their strategy is too far off to be valid. Trump is not a conservative, and that’s reason enough to shun him.

Trump has the potential to be a disaster of epic proportions. I’d vote for him as the nominee only because neither of the Democrats has the potential not to be. But if that’s not enough for you to support him, well, I won’t tell you you’re wrong. And besides, if he’s nominated, I’ll be too busy stockpiling food and fortifying my rural apocalypse compound to try to convince you otherwise.