Loser GOP Candidates Need To Stop Making Asterisks of Themselves

Kurt Schlichter
|
Posted: Jan 04, 2016 12:01 AM
Share   Tweet
The opinions expressed by columnists are their own and do not necessarily represent the views of Townhall.com. 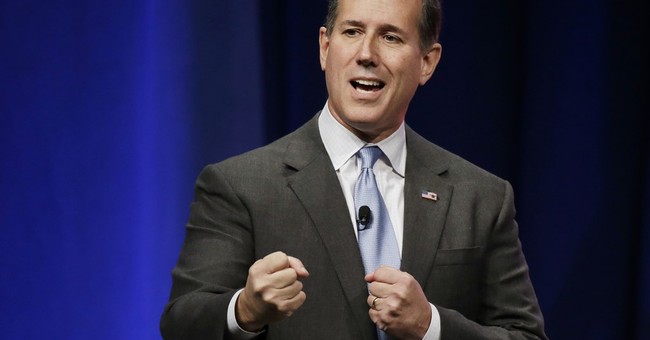 It’s time to say “Goodbye,” and in some cases “Good riddance,” to the asterisks, the footnotes, and the jokes running in the GOP primary. No, not a single vote has been cast, but the outlines of the real race are coming clearly into view. You have the kind-of-establishment candidates (Rubio, Christie), the sort-of-insurgents (Fiorina, Carson, Cruz), and Donald Trump. The nominee is in that bunch, and defeating that malignant, pant-suited monster is more important than stroking the inexplicably inflated egos of the others. Time for the players at the $2 a hand table to fold and add their voters back into the pot.

Look at Bush III. He was sitting on $100 million in ad money and all it has done is made sure everyone knows what a loser he is. “Chaos Candidate” – who told you that catchphrase was going to hurt Trump? The same brain trust that told you to hang a medal around Hillary’s neck? To support Common Core? To describe the unlawful acts of the illegal immigrants who are causing real economic and criminal pain to real Americans as an “act of love?” Your whole campaign has been an act of love.

Sheesh, chaos is why people like Trump. Your donor class, let’s-wave-at-the-unwashed-plebes-through-the-limo-window campaign is dead. Deal with it. Remember Mean Girls and the term “fetch?” Jeb, stop trying to make you happen. You’re not going to happen.

Rick Santorum, why are you even running? Here’s a thought: Dudes kissing is not a priority when we have a gargoyle poised to seize the White House on a platform expressly devoted to undoing the First, Second, and probably the Third Amendment – hell, every Amendment except the Fifth, which she really, really digs.

Mike Huckabee, you’re a beefy, white preacher from Arkansas – not exactly the face of today’s GOP except in every single Democrat meme ever. You don’t have a candidacy. You have a performance art piece that is some sort of bizarre tribute to Boss Hogg from Dukes of Hazzard.

Rand Paul, you have important things to do – like winning your Senate seat again and speaking up for the 50% of the libertarian agenda that isn’t batstuff crazy.

Jim Gilmore, sheesh. I never thought I’d say this in any context, but follow Lindsey Graham’s example and have some freaking dignity.

Then there’s John Kasich. Your candidacy seems to be built entirely upon two pillars – that you can deliver must-win Ohio and that Republican voters are wrong about everything they believe in and need you to tell them that. Well, I don’t think you can deliver Ohio, but if you can then that’s all you should be focusing on, not this quixotic quest for an office no one in your party wants you to have. John, I liked you better in 2012 when your last name was “Huntsmen.” Actually, that’s not true – you were a smug, annoying loser then too.

What’s left gives us Republicans three distinct categories to choose from. Marco Rubio has effectively moved into the establishment GOP column, replacing Jeb while still maintaining his contacts in the insurgent wing. He seems to have the most solid foreign policy ideas and he is polling best against Hillary, but he has two distinct weaknesses. First, his immigration screw-up remains screwed-up despite our pleas for him to fix it. Marco, you will never get my primary vote, or the primary votes of millions of other people, until you make it unequivocally clear that no one who came here illegally will ever, ever, ever, become a U.S. citizen without going home, starting over, and immigrating lawfully. Anything else is amnesty and don’t you dare start arguing with me – a voter and your boss – about what amnesty is.

Chris Christie is also in the Establishmentish column, but he’s now hugging conservatism like he hugged Obama. No, we won’t forget, but if he can get us to trust him to actually do the things he says he’s for now, but manifestly was not before – like supporting our sacred right to keep and bear arms – then he might have a shot.

On the insurgent side, the side explicitly running against the ossified, unjustifiably smug GOPe gang that brought us victory in 2008 and 2012, you have Carly Fiorina. She’s always interesting on stage, and she might find a way to break through again. Then there’s Dr. Carson, who still has a lot of voters in his corner (but less than before). His main selling point is that he’s a nice man. This is also his weakness – in 2016, we need someone who delights in the destruction of our opponents, and the good doctor doesn’t seem like an enemy-crushing and hearing-the-lamentations-of-the-women kind of guy.

Finally, there’s the anti-establishment big dog, Ted Cruz. Cruz is working on his personality problem – he can be off-putting because he’s so smart, but he is a super effective advocate for conservative ideas. In fact, his speeches are all red meat. Which is not good enough – I’m pretty confident I can tell you where Cruz comes down on the issues. What I want to hear from him is how he intends to win 270 electoral votes. Exactly which states can Cruz turn from blue to red in November? And how will he do it? As an infantry officer, I learned that operations are relatively simple; logistics are hard and if you don’t have that down you lose no matter how awesome you are at moving pieces on a map. We know why you should be president; you need to show us how you can become president.

And then there’s Donald Trump. I don’t see him as a big logistics guy, mostly because logistics (like setting up an Iowa caucus turnout machine) isn’t fun or shiny. But he’s got a lot of people who support him and he’s driving messages the GOP needs, like “illegal immigration is bad because it hurts normal Americans” and “Hillary is a cruel, hypocritical monster who personally ratified and enabled the sexual depredations of her pervert husband.”

Someone in these three categories is going to be the GOP nominee, and I’m voting for him or her in November. Now we need to figure out who it will be, and the also-rans need to free their voters to find the real nominee. The ones in it for the good of the country will, and when they see that this is not their year they will free their voters to help make that choice (Kudos to Governors Walker, Perry, Jindal, and Pataki). If your candidacy isn’t going anywhere, it’s time to get your asterisk out of the race.