President Obama, Send Your Deadbeat Supporters to Wash My Car 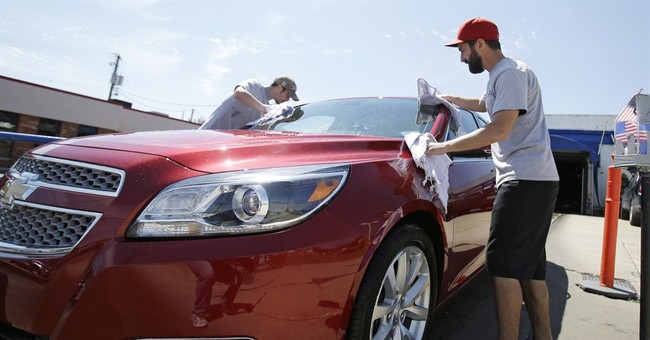 My car needs washing, and frankly I’d prefer that the losers who think Obama’s “free” community college idea is super awesome get off their lazy hindquarters and wash it for me for free. Sure, I could pay for it myself, but then I’d have to forgo things I’d rather have. It’s cruel and inhuman and, I’m guessing, both racist and phallocentric, to force me to prioritize how I spend my money. So, Mr. President, I need you to direct your minions toward my reserved parking space because, in the words of noted jurist and personal hero Judge Elihu Smails, I want it creamed and buffed with a fine chamois.

I’m just going with the flow here. Apparently all that’s needed to get something these days is to unleash your inner wanting and hack politicians will start promising to provide it for free. In the dark, wicked past, things like fine touring sedans and reserved parking spaces – as well as community college degrees – came after one put forth something called effort. “Effort” is a word that describes the means by which the people called upon to subsidize lay-about Democrat-voting losers acquire the money the liberals seek to plunder. But today, we have legions of over-schooled, under-wise, neckbeards voxsplaining to us about how demanding they expend effort before they get stuff is really just discrimination.

Yes, it is. Life, using effort as a metric, ruthlessly discriminates between the lazy and those who have stuff. I am super comfortable with that.

I could go on a long diatribe about all the burgers I flipped and the toilet stalls I mopped over my nearly 35 years of work, but I don’t need to justify my right to my own property or the fruits of my labor. It’s mine, not the liberals’. That’s all that matters – whether I got what I have because I built a company or had super rich parents who handed it to me or because I won the lotto is, frankly, none of anyone’s business.

What’s mine is . . . mine. Not yours. Go get your own. Keep your grubby mitts off mine.

I’m always fascinated when some moral illiterate who’s still sponging off his mommy labels as “selfishness” my unwillingness to give him my hard-earned money just because he really, really wants it. Not that it matters – again, it’s mine, so if I want to be selfish with it that’s my prerogative. If you want the same prerogative, get your sorry tail behind a cash register and start selling people Big Macs.

I refused to listen to President Bottomless Piehole’s speech the other night, but I understand that he pointed out some Potemkin villager as his example of an oppressed prole trying to survive in the living hell that is the America he has led for the last six years. He lamented that Ms. Julia Potemkin worked hard, but darn it, didn’t have the money left at the end of the month to take a vacation or get a new car. Now, how did he come to the conclusion that this is a bad thing? People who are financially squeezed shouldn’t take vacations or drive new cars. That’s not a problem to be solved. It’s an example of thrift to be applauded.

To the extent the situation Ms. Julia Potemkin finds herself in is even a problem at all, it is not for the President or anyone else to address. Hey Julia, you’re a grown woman, at least chronologically. Figure it out. Want a nice vacation? Work more hours, or get a better job. Save money by canceling cable, or cooking at home. Maybe you could do what I did for years as I built my law firm and just not take a vacation. I don’t know what the answer for you is, and I don’t care. You’re a grown women. If you’re unhappy, figure it out.

I do know one thing – the answer is not to come to me and tell me I should subsidize Ms. Potemkin’s decisions by giving her my money. That’s money I got through my decisions, like my decision to spend years working three jobs (lawyer, writer, Army reservist). You know why I have a nice car? Because I made a bunch of decisions that let me get a nice car without asking anyone else to contribute a dime.

A lot of people want their college paid for, but they really don’t want to do the things consistent with buying – yeah, education is a commodity – a degree. Their bright idea is to have mepay for it. And it’s a terrific idea – for them. Funny how that always happens. Oh, and besides being selfish, I’m also short-sighted because it would do all sorts of vague, unspecified good for “society” if everyone could get babysat for another two years past their terms in the Democrat-unionized K-12 moron factories.

Well, since apparently the government now exists to fulfill every transitory whim, I want in. I want my car washed, and I guess that leaves only one alternative, since I don’t want to pay for it. You people who think it’s A-OK to divvy up my money – which is really my time in dollar form – need to get up off the sofa, put down that Xbox controller, and pick up a sponge. Wax on, wax off. Get buffin’.

Hey, don’t be selfish. Think of the benefits to society that would come from me – a demonstrated job creator – if I was liberated from the tyranny of having to get my car washed. What, you still don’t want to? What about society? Why are you so greedy?

Well, I’ll make you a deal. I won’t ask you to subsidize my life decisions and you won’t ask me to subsidize yours. Yeah, that will mean tough choices. You’ll have to choose whether you want to work to earn the money to afford community college or whether you want to work and prosper without a degree by gaining another skill. Heck, you can even choose to learn no real skill at all. But have no fear if you do. As the great Judge Smails sagely observed, the world needs ditch-diggers too.