‘Tis The Season For Militant Atheists To Whine 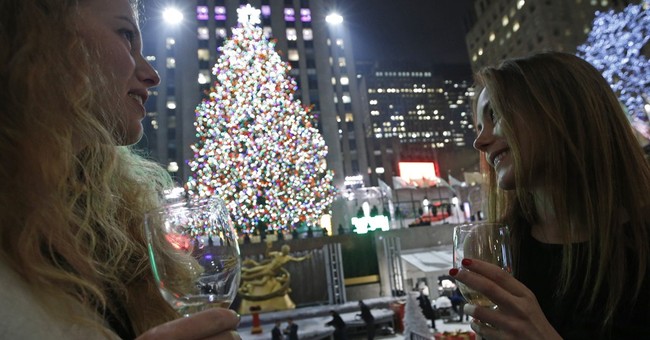 There’s nothing like the holidays for laughing at anti-religious malcontents being driven to madness by the thought of Christians and Jews celebrating their faiths. Crosses, menorahs, happy people with satisfying personal lives – these things drive the militant atheists into a sputtering rage.

Watching them fume is the gift that keeps on giving.

Normal atheists just don’t believe in God, and those of us who do, figure that’s between them. They respect our religion and we respect their right to have no part of it. Sure, some religious folks talk to people about their faith, but it’s not clear why someone advocating his beliefs to another is committing a terrible faux pas. After all, the believer believes he’s trying to do the recipient a favor. The proper response if one is uninterested isn’t exaggerated indignation but a polite, “No thanks.”

That’s how things should work in a pluralistic society where people believe different things. Sometimes you come into contact with people who don’t share your ideas. We call that “diversity” – not the bogus “crush all opposition to progressivism” diversity of the left but real American diversity. The key is not to be a jerk – that goes for both the person sharing his views and the person hearing them.

But jerkiness is the difference between the decent guy who’s just not feeling the connection with the Lord and the smug militant atheist who thinks that putting a fish sticker with legs that says “Darwin” on his Prius is biting social commentary.

Last year, I took my hideous terrier out after opening presents and my orthodox Jewish neighbor saw me and immediately wished me a “Merry Christmas.” And when he saw I was alone on Easter, he invited me to join his family for Passover. See folks, that’s how you do it in America.

So, spiteful little digs like the Darwin fish show us “theists” … well, I’m not actually sure what they’re supposed to show us. That militant atheists are too smart to believe in God? Sorry, my mind is not blown. What else ya got?

Do they think that their militant atheism is some sort of powerful statement of nonconformity? If so, it’s right up there with other emblems of no-cost rebellion, like facial pieced and stupid tribal tatts.

Being a militant atheist in America is about as rebellious and nonconformist as being a virgin at a Brony convention. You really to want live on the edge? Go be an atheist in Iran. See how that works out for you.

These atheist evangelicals aren’t satisfied not to believe. They think we need to not believe too. They seem to live under the bizarre misapprehension that if they are just rude enough to us believers, we’ll somehow unsee the light, put the scales back on our eyes and cast off our faith to embrace a life of spiritual emptiness.

To fill that vast void, militant atheists have taken to forming atheist churches, with sitting in pews, group singing long and sermons. Congratulations – you picked all the worst parts of religion.

What do their sermons cover? “Good morning. There is no God. See you next week?” Maybe they talk about the intolerable cruelty of having to experience people wishing them “Merry Christmas.” Or how their kid heard “Joy to the World” at school and started asking uncomfortable questions when he figured out that who has come wasn’t Santa.

Militant atheists are not all the same. The third most annoying kind likes to shout about how believers hate “science.” I sure hate science. And that’s not an iPhone in my pocket. It’s a magic talking-box that I power with prayers.

The ones shouting about “science” at us superstitious knuckle-draggers are inevitably the ones most breathlessly pushing the global warming scam. Just don’t point out that their claim that all weather phenomena support their climate change hypothesis makes it not really scientific at all. They’ll call you a “denier,” and in militant atheist-speak, “denier” means “heretic.”

The second most annoying militant atheists are the ones who think they’ve mastered Christian dogma. They’ll quote some obscure passage from the Book of Habakkuk (2:15) and start quizzing you on how you can consider yourself a good Christian after you gave drink to your neighbor. Of course, I have an edge on them. I was raised a California Methodist, and we don’t actually have any dogma.

The most annoying ones file lawsuits. Somebody wants to say a prayer before a Friday night high school football game in East Tumbleweed, Texas, and you can be sure some litigious twerp will allege that he is being subjected to the worst religious oppression since the Christians played the lions in the Colosseum.

And what Christmas and Hanukkah season would be complete without some friendless killjoy suing because a town decided to stick a cross and a menorah out in front of city hall? The sight of so many happy, content people seems painful to them. But then, have you even met a happy, content militant atheist? If so, what was the name of his unicorn?

This is not to say that some holidays don’t deserve mockery. Take Kwanzaa, which is a religious holiday in the sense that progressivism is, itself, a pagan religion. Some communist professor/convicted felon named Maulana Ndabezitha Karenga (née Ronald McKinley Everett) invented it in 1966. He hung bits of Marxy foolishness off it like ornaments on a Christmas tree. My favorite is the principle of Ujama, or “cooperative economics.” Gee, how could a concept called “cooperative economics” possibly go wrong?

So, to all the believers and nonbelievers out there who live in harmony with their neighbors of all faiths or none, Merry Christmas and Happy Hanukkah! And to you militant atheists, have a socially just and redistributive Kwanzaa, comrades!