Lies and Hypocrisy Are Essential Components of Liberalism 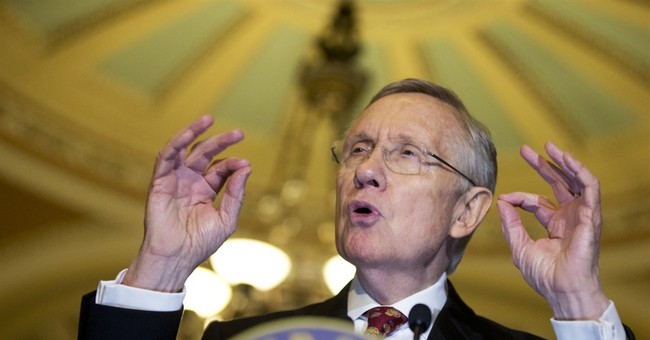 Recent events once again demonstrate that there is no point arguing with liberals. Reason, facts, truth – these bourgeois concepts mean nothing to the adherents of progressivism. You are never going to change the mind of someone who believes in nothing except the imperative of his own absolute power. You simply have to defeat him.

Progressivism is not a coherent ideology so much as a purpose – to control every aspect of our lives. It is about consolidating progressive power. Nothing else matters. That includes the truth.

This is why we see YouTube videos of Harry Reid, Joe Biden and Barack Obama waxing eloquently, while in the minority, about the moral necessity of the preserving the filibuster that they just shot through the forehead when in the majority.

This is what led to an agreement ensuring that a power that explicitly states its intention to reboot the Holocaust, once it finishes hanging all its gays, will be able to create the means to do so.

This is the reason the President repeated dozens of times that if you like your health plan and your doctor you can keep them even though he knew this to be an outright lie.

Progressivism is not about principles but necessity. Yesterday, the left needed the filibuster to bar conservative judges. Today, it needs to pack courts with allies who will rule in whatever way progressives need, so the filibuster goes.

Sure, progressives pose as friends of Jews and gays when it’s convenient, but now it’s more convenient to get the Obamacare abomination off the front page while simultaneously weakening America and Israel. For progressives, that’s a win-win-win. And if some Jews and gays have to die, well, uh … hey look! Republicans want to make you pay for your own birth control!

Progressives needed to provide cover to their legislators to socialize the health care system, so they simply lied. The only fault the progressive-owned mainstream media can find with that is with us for being stupid enough to believe what the liberals told us.

I agree. If you believe anything a liberal tells you, if you imagine you can count on a liberal to hold to any particular principle when that principle stops being useful as a means to accumulate power, you are a fool.

Such people still get surprised when the pro-woman party slut shames women who object to being used as sex toys by feminist heroes. Teddy got drunk and left a woman to drown in his Oldsmobile after he drove off a bridge on the way to a routine session of joyless, creepy Kennedy adultery. Mary Jo Kopechne died; Teddy was hoisted on a sea of liberal shoulders and hailed as the “Lion of the Senate.”

But Teddy arguably had the moral high ground compared to liberal icon Robert Byrd, the Grand Imperial Cyclops Kleagle of the Senate. Their degeneracy was irrelevant; they were both useful to progressivism. Nothing else mattered.

Yet the squish caucus wing of the GOP still imagines that it can make deals with the liberals, as if this time Lucy Reid is really, truly, totally going to hold that football in place so that the Lindsey Browns can kick it.

Look at these GOP mouth-breathers and their undying fixation on amnesty. Obama won’t enforce the laws we have. In what universe could any idiot be stupid enough to imagine that he might enforce any of the laws that the GOP amnesty appeasers might get in exchange for their abject capitulation?

You can’t negotiate with progressivism. You can’t reason with it. You can’t compromise with it.

You have to destroy it, utterly, root and branch.

Understand that progressivism isn’t just another way of looking at things. It isn’t an equally valid lifestyle that we should treat with respect and courtesy. It is not an intellectual peer of conservatism.

Progressivism is the hapless Cousin Oliver of the collectivist Brady Bunch. Whether you label it “progressivism,” “socialism,” “communism” or “fascism,” it’s all just the same collectivist tyranny, varying only by degrees of bloodshed and fashion choices. Differentiating them is like choosing between herpes strains – it’s just a matter of the size of the chancres.

We need to know our enemy and understand it, because when we do we can destroy it.

Expect hypocrisy. Expect lies. Highlight them certainly, but not for ourselves. We know that hypocrisy and lies are essential components of progressivism. Do it instead for those who don’t yet understand. Do it for the undecided in the battle for the soul of America.

It’s that mass of people who are not aware of just what a sick power grab progressivism really is behind its false front of “caring” and “social justice” that we need to reach. If their hearts and minds weren’t in play, the progressives wouldn’t bother lying to them. They would enforce their will with storm troopers.

We are still at the stage where the opinions and desires of people who aren’t progressive still matter – the hypocrisy and lies are part of the long-term process designed to change that forever.

We must continue to highlight this truth: Progressives care about gays, women, blacks and other groups only to the extent that appearing to do so brings short-term political advantage.

Does anyone think progressives wouldn’t abandon their belief in their right to government-funded abortion at will if having that belief stopped being useful? You could ask the gays in Iran about how pro-gay progressives are when liberal leaders need to change the news cycle, except they’ll be hard-pressed to answer with nooses around their necks.

Arguing with progressives is a waste of time because they believe in nothing except that they should rule over us. Progressives don’t seek justice. They seek power. Treat them accordingly.

Is This the Most Embarrassing Anti-Gun Op-Ed Ever Written?
Townhall
'She's OLD, she gets cold': Taylor Lorenz posting pic of her thermostat set at 90 pisses both the Right AND the Left off
Twitchy
Durham: Hillary Clinton Lackey Testifies She Signed off on Pushing False Alfa Bank Story
Redstate
APPALLING: Teen Girl Disappears at NBA Game and Turns Up 11 Days Later in Nude Photos on Sex Trafficking Site
PJ Media