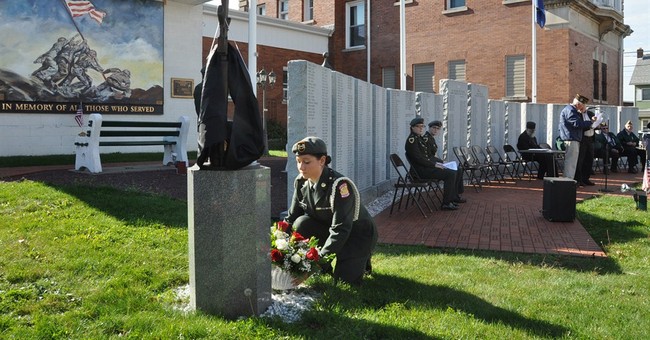 This Veterans Day, let’s honor our warriors, not patronize them.

We veterans resent the left glomming on to us to justify the welfare state, responding to any observation regarding the millions of liberal-voting deadbeats feeding off of Uncle Sucker with the smug rejoinder “What about the veterans who need help? Why do you hate veterans?”

Like progressives ever cared about our warriors – the only reason they aren’t lined up to spit on our returning fighters is they know they’d get their teeth knocked in.

Let’s be clear – being a veteran is not a “Get out of work free” card that excuses you from the basic responsibility of supporting yourself and your family. If I pass a bum with a sign reading “Homeless Vet,” I don’t feel an overpowering surge of solidarity. I feel disgusted that another low-life is trying to milk sympathy off a proud status that millions of us earned with our blood and sweat and years of our lives.

Are there vets who need help? Of course, but those aren’t the ones you see playing the vet card to avoid work and fuel their addictions. Some legit ones have physical injuries. For others, the wounds are invisible and hard to understand, like traumatic brain injuries. We owe these warriors not only our support but our compassion as they struggle against an insidious enemy. They are eager to overcome their challenges and to build productive lives.

These wounded warriors are getting some of the help they need through the government – taking care of those hurt in the service of the nation is a basic federal government function and about the only kind of safety net program that can be legitimately extrapolated from the text of our Constitution. Where the government falls short – as it inevitably will, because it is the government – the American people are picking up the slack.

But the “professional vets” you see demanding handouts are, at best, exploiting their long-ago service. Just because you served doesn’t necessarily indicate that you will forever demonstrate the kind of character and self-respect that the military demanded you show when on duty. It’s not a free pass for the rest of your life – in fact, fellow vets expect more from you. We expect you to live up to the example of the overwhelming majority of veterans who came home, hung up our uniforms and went about building families and careers.

Of course, that assumes that all of the people out there claiming to be veterans actually are veterans. My police pals inform me that the only uniform most of these frauds have ever worn is an orange jumpsuit. A vet can always tell a fake – asking for a DD 214 and getting a blank stare back is usually a pretty good tip-off.

We vets aren’t victims. We aren’t pawns to be used to justify giving handouts to couch-dwellers. We aren’t asking for anything except to be taken care of when injured – and we shouldn’t have to ask for that.

Vets are humble – the guy who tells you how he was a war hero invariably wasn’t. But because our military has grown so remote from most Americans’ lives, many civilians are unsure how to express their gratitude toward their warriors. Here’s how:

If you see an guy in a ball cap that reads “World War II Vet,” “Korea Vet” or “Vietnam Vet,” ask about it. Make sure your kids listen. These heroes won’t be with us forever, and their stories need to be told. I remember speaking at a function and sitting next to an unassuming gentleman who turned out to have landed at Normandy. For a military guy, this was like being a garage band guitarist who got seated next to Pete Townsend.

Citizens often want to reach out to warriors they see in uniform around town or at airports. That’s great. A “Thanks” and a handshake, even a hug, is appropriate.

Now, this will fluster the warriors. The warriors will tell you they are just doing their job, and they mean it. Most warriors are baffled that someone is thanking them because they know so many people they feel truly deserve it. Thank them anyway.

Sometimes a warrior in uniform at a restaurant will find his tab paid when he asks for the check. This happens a lot. If you feel compelled to do it, any senior sergeant or officer will tell you to save that for the younger troops. They get paid less and they do the really hard work.

If you want to say “Thanks,” but you aren’t where there are a lot of warriors around, then why not help out Operation Gratitude or Wounded Warriors? Do you own a business? Think about hiring a vet. I did, and she’s awesome.

Regardless of how you choose to do it, on this Veterans Day, let’s honor our warriors – including deployed ones like my pals Jon and Don. Instead of treating them like losers in need of pity, let’s treat them like what they are – heroes.

The opinions expressed here are those of Kurt Schlichter alone and not of those of any governmental organization.