Where Are All The Kids? 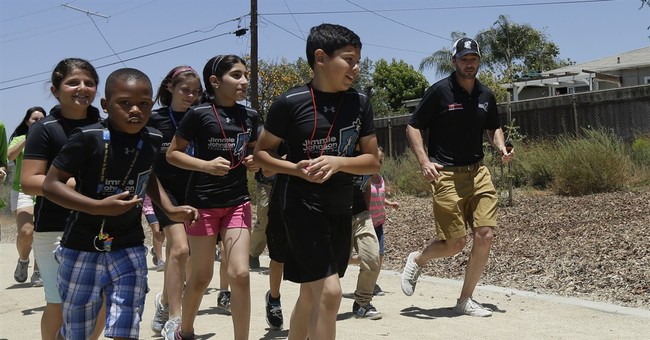 You can drive through residential neighborhoods and never see a single child out playing. We should worry about what this means for the future.

There are still kids in those neighborhoods to be sure; you can see them at the schools getting dropped off by their moms. Few kids seem to walk to school anymore. My old elementary school got rid of the bike racks and turned the enclosure into a garden.

Maybe it’s the phenomena of helicopter parenting. It’s not the cool helicoptering of Wagner and “Ride of the Valkyries” but the lame kind of Barney and songs about feelings.

These kids do nothing without their parents hovering over them – in fact, you hear of college kids referring to their parents as “their best friends.” Gag me.

I went back to my hometown on the San Francisco Peninsula over the Fourth of July. When I grew up there in the Seventies, before Silicon Valley, it was solidly middle class. We weren’t poor, but we weren’t rich. It was a big deal when my parents got a second car; everyone had a station wagon, invariably American made.

Kids were everywhere. We played games on the street – baseball, tag, army. We left in the morning and came home for dinner. There was a big woods behind our house and we’d disappear into it all day, returning with cuts, scrapes and the occasional gopher snake.

But today, nothing. The neighborhood has changed – the Fords and Dodges are now BMWs and Mercedes-Benzes, and minivans replaced the wagons. I know there are kids there, but you never see them. Where are they? Lurking inside the million dollar houses? Doing what?

I went walking in those woods again. There was no sign anyone else does. A wonderland is just outside these kids’ backdoors and they never visit.

My own kids come to me and talk about “playdates,” as if childhood is supposed to be a set of pre-planned enrichment experiences instead of improvised entertainment. Can’t they just go over to their friend’s house and see if Kayden or Ashleigh or whoever can come out and play?

No, I’m told, it’s too dangerous in our affluent neighborhood. And if you look at the Meghan’s Law site for any neighborhood you’ll believe it. All these little flags pop up, each some form of registered sex offender. So, instead of driving these degenerates away, we conform and constrict our lives to accommodate their presence.

I asked a cop friend I served with in the Army if this was just paranoia. He said he wouldn’t let his kids play on the front yard unless he was out there with his Remington 870. That answered that.

So kids cluster in their houses, playing video games, watching the tube, waiting for mom to walk them to the park or go on some pre-planned activity. And they do homework – little kids come home weighed down with more homework than I ever had as a high schooler.

The school seems good – it honored our warriors and I haven’t detected much lefty propaganda. However, the school did send home a supply list that – I am not kidding – included “Multicultural Crayons.” I guess you need that in case your art project requires just the right shade of “White Hispanic.”

All the parents think their kids are special, and if they can’t be special through achievement, I notice many are special because of some alleged “issue” or “problem.” It seems to me that a lot of the problems boys get labeled with relate to them acting like rowdy, rambunctious boys. Drugging out an exuberant lad can be a lot easier than dealing with him.

The kids’ experiences are so limited, though that’s certainly a function of us parents being busier than our parents ever were. We used to take two-three week family vacations, camping across the country. But that’s just not in the cards for most families today.

By age six I was shooting guns; I now have to find someplace probably 50 miles away to train my kids on the basic firearms skills all American citizens must know. Oh, and today parents will ask, “Do you have guns in the house?” as if that would even be a question. None have ever asked me that – I guess they just assume it – but if they did I’d look at them funny and say, “Of course. I’m an American.”

My kids have a Nerf arsenal that would make Charlton Heston proud. Some parents don’t let their kid play with war toys, meaning the burden of defending wimpy special snowflakes like their brats will eventually fall to the next generation of Schlichters, as it has for the last few generations.

That’s my real worry – will Americans of the future be able to compete, both in the boardroom and on the battlefield? I think at least some of them will.

Since 9/11, I’ve had a chance to serve with many young people. Call them Millennials or whatever, but they have faced every challenge and earned the right to be mentioned in the same breath as the heroes of World War II, Korea and Vietnam.

Maybe I see the cream of the crop – military standards are so high that only about a quarter of young people can qualify physically, morally and academically to enlist. And maybe these young warriors self-select as those who aren’t satisfied to stay safe in a tight, comfortable, smothering cocoon.

But it’s a hard world, full of hard people and hard realities. Are we doing our kids a favor by protecting them instead of letting them learn that on their own? I don’t know the answer.

Regardless, these kids are still missing something that many of us older folks had. Even correcting for the inevitable nostalgia that clouds our vision back into the past – childhood wasn’t perfect for anyone – it makes me sad. I’d just like to see kids playing outside again.
Did Joe Scarborough Forget He Sponsored a Resolution Against Rev. Al Sharpton?
Rebecca Downs
When It Comes to Economic Success That's Happening, Let's Not Forget It's in the Red States
Rebecca Downs
18 Senators Call to Defund Biden Disinformation Board
Sarah Arnold
Wells Fargo Whistleblower Claims Bank Held ‘fake interviews’ For Diversity Efforts
Sarah Arnold
Should We Be Worried That Bill Barr Is Going to Cooperate With the January 6 Commission...Allegedly?
Matt Vespa
Did a Late ABC News Reporter Warn Us About the Dems' Growing Abortion Extremism Back in 2012?