What Does Wendy Davis Really Stand For? 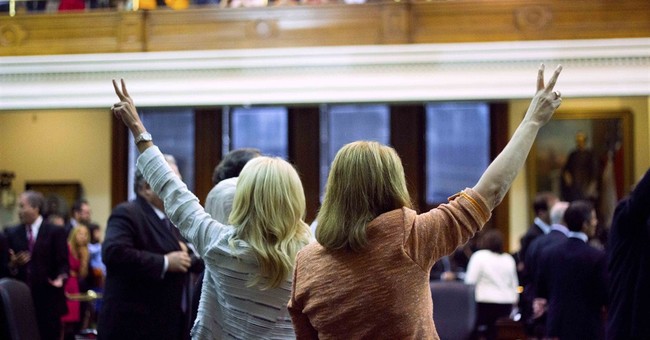 After her 12+ hour filibuster of SB5 on the floor of the Texas Senate Tuesday night, State Senator Wendy Davis rose to "stardom," being labeled a hero by Planned Parenthood and the political left and given fawning interviews on cable news shows asking when she plans to run for higher office.

But something important has been left out of the discussion here: what did the "courageous" Wendy Davis protect?

In fact, she fought for abortion -- the "right" to kill a baby in the womb in the 5th month of pregnancy, a baby scientifically proven to feel pain at that stage. With more than 60% of Texans agreeing that abortion should be banned at 20 weeks, the majority clearly does not #StandWithWendy.

And from what exactly did Senator Davis protect Texan women?

Why are these important? Because it is exactly these safety standards that the state of Pennsylvania lacked and ignored, which allowed the butcher Kermit Gosnell to operate for decades. When investigating the death of Gosnell's patient Karnamaya Mongar, the Grand Jury Report found that it took over 20 minutes for emergency personnel to simply get her out of the building because of narrow, cluttered hallways and a padlocked emergency door. Mongar died.

Anyone who has read the 250+ page Kermit Gosnell Grand Jury Report understands why abortion facilities must have safety standards and not be left to their own devices.

Isn't the pro-choice tagline supposed to be "safe, legal, and rare?"

Wendy Davis is not a hero. You can't defend her protection of Kermit Gosnell-like practices and killing babies who can feel pain, which is why you won't hear the truth about what SB5 would have really done.

So before MSNBC offers Davis her own show, President Obama tweets out his support again, and Moveon.org sends any more fundraising emails for her next political campaign, perhaps they should consider who Davis truly protected: the Kermit Gosnells of Texas.

It's up to us to get the word out -- use the hashtag #Stand4Life, especially starting at noon on Tuesday when we are having a Tweetfest. Help us make it trend and tell the media the truth.

Kristi Noem Says South Dakota's Transgender Sports Bill Will Be the 'Strongest' of Its Kind in the U.S.
Landon Mion
Sec. Blinken Emphasizes 'Diplomacy and Dialogue' on Sunday Shows, Assures 'Swift Response' Towards Russia
Rebecca Downs
University of Washington's 'Inclusive Language Guide' Says 'Grandfather,' 'Housekeeping' are 'Problematic'
Landon Mion
DCCC Torched Over Tweet Claiming Republicans Are the Ones 'Interfering in Your Private Medical Decisions'
Rebecca Downs
Pennsylvania School Board Member to Parents: 'I Don't Work for You'
Landon Mion
Joe Biden on 2022 Midterms: 'We Have to Expand Our Majorities,' GOP is 'Completely Controlled' By Trump
Rebecca Downs