Is China Using Electric Buses to Spy on American Cities?

Kira Davis
|
Posted: Aug 08, 2019 12:01 AM
Share   Tweet
The opinions expressed by columnists are their own and do not necessarily represent the views of Townhall.com. 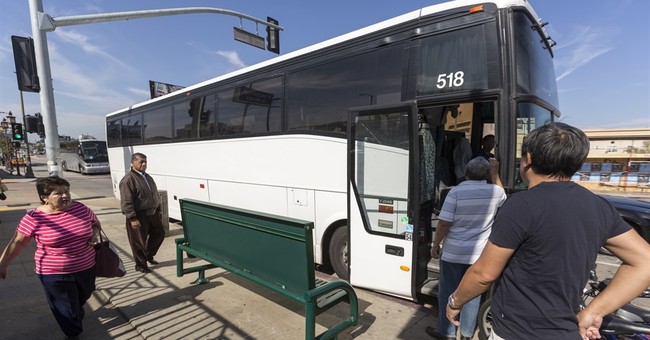 We are spending a lot of time, energy and resources worrying about Russian spying on American interests on American soil, but in the meantime another enemy may have been doing just that…and with the help of our own government.

Our attention span is only so long and social media - as big as it is - can only handle a narrow range of outrage. Some serious business is flying under the radar in the meantime.

And it involves buses.

Here in southern California, the government has been trying to shove “green energy” and electric vehicles down our wallets for years. Most recently, the city of Los Angeles contracted with Chinese battery maker BYD Ltd. to provide a fleet of electric buses, forklifts and trucks. Los Angeles authorities are determined to completely eliminate fossil fuels from their inventory in 12 years.

It is interesting that they would turn to a communist nation to achieve that…but I digress.

The Los Angeles Times has reported that BYD originally approached California officials in 2008 about providing electric vehicles. In a state that worships green technology and is desperate for jobs, it was an offer too good to refuse. Since that time BYD has been awarded more than $330 million in government money for battery-powered buses, forklifts and trucks and they are set to become the “prime supplier of electric buses to the nation’s second-largest system.”

Unfortunately - and for many, unsurprisingly - the Chinese buses have been nothing but trouble. A Times investigation discovered buses stalled on hills, an inordinate amount of service calls versus those needed for older buses, and an “unpredictable driving range” that fell far below promised performance.

It may sound negligible, but imagine an America where all of our public transportation just one day stopped working, clogging the streets and roads? Food for thought.

That isn’t the worst of it. It turns out China may be equipping those buses with sophisticated spy technology, or at least have the capability to do so. Rep. Harley Rouda (D-CA) recently verbalized the concern, saying it is “in the national interest to make sure we have viable rail and bus industries and to protect us from spying and sabotage of our public transportation system”.

This isn’t the first instance of concern over Chinese spy capabilities. Recently the Trump administration moved to block Chinese telecommunications firm Huawei Technologies Co. from operating in the security sector over fears their surveillance technology could have the potential to be manipulated for spy purposes.

Last year, Bloomberg Business broke the story of Chinese microchips being inserted into American communication technologies like cell phones and other devices. Companies like Apple and Amazon were left vulnerable to Chinese theft of intellectual property and classified government operations, especially considering Apple tech is used frequently by government entities.

So why are we allowing American government entities to purchase Chinese technology that could almost surely be used to spy and gather data in sensitive, classified areas? What can be done about this?

Interestingly there are two versions of the same bill sitting in Congress right now that purport to address this issue.

China is our number one “frenemy,” but we are not allies in any sense of the word. They are a dangerous entity. The government of the United States of America has no business doing any kind of infrastructure-related business with China. Private trading is one thing (although it does come with its own issues) but we should absolutely not be allowing China to provide any kind of technology to our government. At best it is ignorant. At worst, treasonous.