No, the GOP Does Not Do Effective Outreach in Black Communities

Kira Davis
|
Posted: Mar 21, 2019 3:45 PM
Share   Tweet
The opinions expressed by columnists are their own and do not necessarily represent the views of Townhall.com. 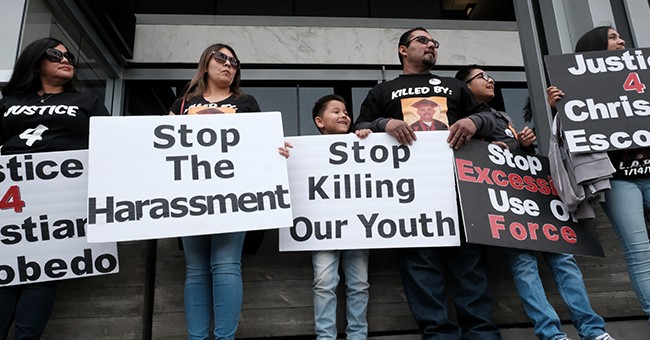 A recent tweet from conservative writer DC McAllister raised a bit of ire among black conservatives when she suggested the GOP had been doing outreach but that black Americans/minority voters just want to “struggle” and aren’t interested in freedom.

“…they’re not interested because they believe they are oppressed. They don’t want freedom. They want the struggle. They want revolution. They want “justice.”

Many Black conservatives - including myself - lashed out at McCallister’s statement in frustration. This is a battle we’ve been fighting from inside conservatism for some time.

The GOP has not done effective outreach in the Black community since…well, since forever. By the time they realized the Democrat party had pulled the ol’ switcheroo on them (pushing the ridiculous Southern Strategy lie) it was too late.

I’m not a racialist. I abhor identity politics. I hate pandering and as a Christian it is my sincere belief that racism is a sin and not some “special” form of hate. I believe the message of Jesus of Nazareth that revolutionized how we accept diversity and equality as the only path out of hatred and bigotry. As my friend Darrell Harrison - a podcaster and writer on Christian theology and social justice - likes to say, we either believe in the Gospel message of redemption or we believe in race. The two do not go together.

That being said, when it comes to making political gains I do believe it would behoove conservatives and the GOP to at least understand that there is a large cultural divide between white and black Americans and it manifests itself in ugly ways when it comes to discussions of race. I believe in dealing with the world the way it is, not in the way we wish it could be. McCallister’s statement was ignorant not because I believe she’s racist, but because she believes the GOP has indeed done the work in reaching out to Black Americans. I can tell you from honest experience…they have not.

There are a lot of relevant, rational issues the GOP could be engaging Black Americans on if they took the time to coordinate a message and campaign and take those things all the way down to local races (where GOP campaigning would be most effective). There is a good case to be made for a more conservative approach to some of the challenges we face these days. Why the GOP hasn’t been aggressively making that case is beyond me, but it’s become more and more obvious that Black America is just a means to an end for both parties. No one seems really serious about earning our trust…or our political capital.

Here are a few messaging platforms the GOP could harness to directly address a long-neglected demographic.

1.Police brutality. The GOP drops this ball as a talking point every time it comes up. It would be so powerful to hear GOP representatives publicly say,“I may not have always understood the unique challenges faced by Black America when it comes to the police but I do understand that the more control we give government over our lives the more control we give to government agents to exercise that control when it is most dangerous. Black people have historically been unable to trust law enforcement and while there are many noble law enforcement agents out there, we are all better off when we can limit their reach into our lives on a daily basis.That means reforming criminal justice, striking egregiously petty laws and changing perceptions by supporting initiatives the help lift people out of the economic holes they may start their lives in.” Make a case, not a judgment.

2.Welfare reform. It isn’t right to assume that Black people are the only ones on welfare, but it also is ignorant to deny the fact that many of us are because we continue to occupy a large portion of the poverty matrix. Black people are often not even in on the conversation when it comes to economics and income. Don’t poo-poo Black Americans who feel the GOP just wants to get rid of poor people. There is reasoning behind it, even if you feel it’s faulty. Take the opportunity to discuss ideas about entrepreneurship, education and how a dollar taken in taxes to support entitlement programs often has to make its way through dozens of bureaucracies before it can loop back around to your own community with much less value. Highlight the people who are serving their communities without the government and encourage more of it.

3.Religion. Black people are overwhelmingly religious, with about 83% identifying as practicing Christians. White evangelicals get all the pain and the glory when it comes to efforts to slander Christians and pushback on faith values in the public square. But Black Christians hold all the same views about marriage, sexuality and family structure. We might not look like we’re living it out statistically but we still hold an overwhelmingly conservative view when it comes to “family values” issues and we don’t like white people telling us what to do with Jesus. You can walk into any majority Black public school in any majority Black area in America and you will find them praying openly at graduations, invoking God in school and generally just living with their faith without question or conflict. We don’t care what the white folks in hoity-toity land think. We take our God seriously. When framed as an issue of the right to worship free from government interference (another thing our community is familiar with) it’s a winner.

4.Abortion. Conservatives are fond of reminding the Left that Planned Parenthood was borne out of the genocidal ambitions of Margaret Sanger. While that is true and certainly deserves to be highlighted, it can only be one aspect of outreach. The reality is that many Black women take advantage of Planned Parenthood’s abortion industry not because they’re ignorant of its past but because they are scared. The traditional media campaign to paint Republicans as completely neglectful of what happens to children once they are born is effective propaganda. So fight it with equally effective propaganda. Get into the advertising game. Start making a big deal out of pro-life pregnancy centers that are offering real, immediate and ongoing support to young mothers from minority communities. It’s not that hard to find them. If Black Americans want to increase our political capital then we should be intimately involved in increasing our population.

5.Education. Fully embrace school choice and run hard on it in the communities you’ve traditionally left behind. This one is so easy. It enjoys bi-partisan support and is overwhelmingly popular in inner city and underprivileged communities. It is a civil rights issue the Democrats boldly and unashamedly run against wherever possible. It’s great optics, provides measurable (positive) results and engages voters in on an emotional level as well as a practical one. There’s no down side to this. Get out there!

I know the GOP has hired “Black outreach” directors but that’s clearly only the tip of the iceberg and I can’t speak to how much support those people are actually getting. I’m flummoxed by how comfortable the GOP seems with leaving this very important voting bloc on the table. No wonder Black people aren’t interested in Republicans. Republicans have shown no interest in making their case to the Black community in decades. Democrats may have a bad record when it comes to improving Black lives, but they show up and that matters…clearly.

Make the cases. Give us something to vote for, not against. Show up for the minority Republicans who are running local races and help themmake these cases. Electoral success will trickle up, not down.

Next week I’ll address where the GOP should be showing up. Stay tuned.