Kira Davis
|
Posted: Dec 07, 2018 5:25 PM
Share   Tweet
The opinions expressed by columnists are their own and do not necessarily represent the views of Townhall.com. 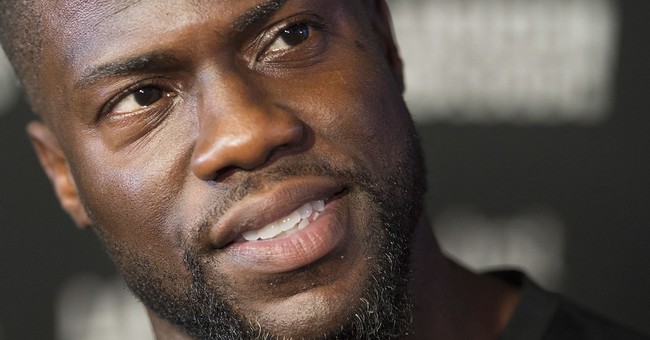 Kevin Hart is out as the host of the 2019 Oscars just a few days after he was in. That’s how it goes, these days. The internet giveth and the internet taketh away.

Hart - an accomplished, veteran comedian - was forced to step down after refusing to apologize for “homophobic” tweets from some seven years ago. The celebrity class is largely silent. Everyone knows they’re on record saying something that their own outrage mobs would find untenable. No one wants to get caught in the tempest of their own making.

But Hart’s displacement isn’t just about being forced to bow to a merciless culture of rage. It also serves as a reminder that there is a giant gap between Hollywood fantasy of black America and the reality of black America. We may be paying a lot of lip service to actors and artists of color these days with nominations, indignant acceptance speeches and clever hashtags but the push by white Hollywood to present itself as more “woke” than ever is just another form of white privilege.

Representative Mia Love (R-UT) recently delivered a very passionate concession speech after losing her seat in November’s midterms.  In that speech, she said something that very few black conservatives/Republicans in politics are willing to say out loud - that on both the right and the left, Washington’s relationship with black America is largely manufactured. It is transactional, and thus conditional.

It goes something like this: Tell us what we want to hear, how we want to hear it and help us shame the other side and you’ll always be considered ‘one of the good ones’ and that has its advantages. Stray from the script and we don’t need you anymore.

It’s easy to look at the political class through that lens and shake our heads in disapproval, but Hollywood does the exact same thing. I’m not only talking about how they regularly and with impunity malign and insult black Americans who might identify as conservative. They do it to the liberals too. It’s as much of a transactional relationship as Washington’s.

In Hollywood, black people often serve as “proof” of a progressive mindset. Hollywood regularly mocks Christians but you’ll be hard-pressed to find any mainstream offering that insults the faith of black Christians the way they do to white Christians, even though the vast majority of black Americans identify as Christian. The religiosity of the black community is a problem for white Hollywood, and so the answer is just to ignore it. Don’t tell anyone, but you can go into nearly any public school anywhere in a majority black community and you’ll find people praying there. Few people even think about it. The prevailing wisdom is that it’s just those pesky white evangelicals that prefer prayer in schools. So what do we do? We ignore it. It doesn’t exist to angry white leftists who only want to defend black people for what it adds to their own social standing.

Another problem Hollywood is forced to largely ignore? “Homophobia” in the black community. No black person is surprised to hear about Kevin Hart’s supposed homophobic tweeting. Black America still hasn’t jumped aboard the PC train some 20-30 years after the idea of PC was forced to the forefront of our culture. Go to a party in a black home, watch black movies, listen to your favorite black comedian and you’ll hear all kinds of “inappropriate” things flying around. Gay slurs abound. Tasteless jokes about effeminate men, trans folks, and gay people are the norm. The black community is a church-going community and while everyone knows someone who is gay, they don’t necessarily believe it’s a cause for celebration. There’s no one at the dinner table telling the Kevin Hart’s of their family to curb their homophobic language. It isn’t shocking. It’s normal. Many black gay people stay closeted to their families because of this. Homophobia - or at least a version of it - is rampant in black America. Most black people will confirm this.

And still, black culture is the white horse the Hollywood elite insist on riding in on every time they want to appear compassionate and progressive. They’re so invested in it that they cannot afford to view black Americans as anything but one-dimensional. At one time most of our depictions in film were negative. Now, they’re maddeningly idealistic - which is no less racist. Instead of being seen as a nuanced, varied and diverse community with our own internal struggles and challenges we are confined to the “noble savage” meme. In an act to perhaps appease their own white guilt, leftists want to elevate black people in public, but in their real lives they really don’t intimately interact with them. They don’t know anything about the complexities of black culture. It’s just a means to an end.

So what to do? The “noble savage” narrative isn’t just politically convenient, it’s profitable. The only solution is to ignore the homophobia issue. And when the Kevin Hart’s of the world pop up to inconveniently interrupt the white-washed version of Hollywood’s “acceptable” people of color, he must be savagely squashed and dismissed as a one-off.

The culture of identity politics has made us strangers to each other instead of it’s supposed intended goal of helping us “see” one another. It’s turned us into memes instead of people. It’s given people an excuse to only look at the surface of a given culture but delve no further. As long as we use the acceptable descriptors of each other we are under no further obligation to scratch below the surface and have meaningful, illuminating interactions.