Kim Ketola
|
Posted: Sep 18, 2017 1:19 PM
Share   Tweet
The opinions expressed by columnists are their own and do not necessarily represent the views of Townhall.com. 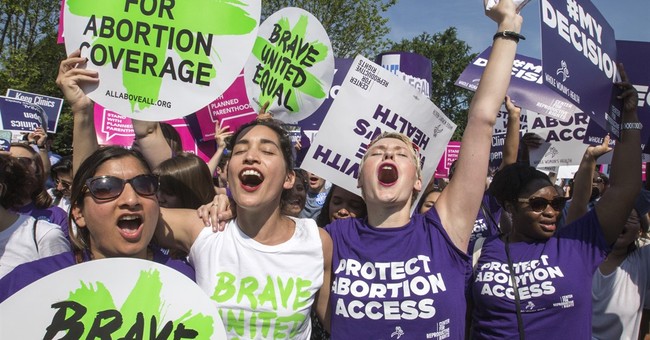 Actress and activist Martha Plimpton hearts abortion so much that she wishes she could Yelp review her first—the one in Seattle—as her ‘best’ abortion. It was heads and tails above the rest!

Plimpton made the remarks at a June #ShoutYourAbortion (SYA) event headlined by Dr. Willie Parker, currently supplementing his abortion trade with sales from his book “Life’s Work: A Moral Argument for Choice.”

SYA’s You Tube video of the event is just now making waves as conservative media, including Fox News , The Blaze, Live Action News and others spotlight Plimpton’s pandering to the hometown crowd in Seattle, who cheered her on as she, well, shouted her abortions.

And I’m not entirely comfortable with the way pro-lifers are piling on in their comments sections and newsfeeds.

SYA’s viral social media campaign arose in 2015 to counter the Center for Medical Progress’ undercover videos that presented evidence of the heartbreaking brutality, which not only undergirds Planned Parenthood’s business model, but is also central to every single abortion.

SYA’s effort to paint abortion as a social good would seem to be gaining traction. Their stated mission: “Abortion is normal. Our stories are ours to tell. This is not a debate.” The campaign garnered over 150,000 tweets in the early going, winning positive coverage from The New Yorker, Washington Post, Nightline, New York Times, The Guardian, LA Times, BBC, CNN, Buzzfeed, Bust, NPR, Salon, Huffington Post and Al Jazeera. Ironically, many of these same outlets refused to cover the Center for Medical Progress videos.

Yet, per the Centers for Disease Control projections, approximately 1 million women undergo elective abortions each year, a rate that has held steady for the past 30 years.

That’s millions and millions of women with stories to shout.

And two years on, SYA’s fundraising page, still up at Indiegogo, reports 176 donors gave $15K or 15 percent of its stated $100,000 goal. Over on Twitter where the “movement” started, @ShoutYourAbortion has amassed just 2,300 followers.

Not only are they not shouting, the overwhelming majority of women who have had abortions are nowhere to be heard.

Speaking as a woman who has experienced abortion and who shares others’ stories entrusted to me, here’s what you need to know: whether a woman speaks up or remains unheard, abortion is always a matter of the heart.

As Baylor professor Francis Beckwith says, “Abortion is the intentional killing of an innocent human being, therefore it is morally wrong.”

Yet we live in times when something so deeply wrong is a woman’s legal right.

Given that paradox, abortion either breaks your heart—or it hardens it.

It’s easy to see where Ms. Plimpton falls. And while it would also be easy to dismiss her comments as a caricature of liberated lunacy, her efforts to promote abortion are not only self-defeating but profoundly self-destructive, for we can never willfully and shamelessly harm another without diminishing ourselves.

The science of embryology states without controversy that at conception, the zygote is a distinct, living, whole human being. And it’s our shared human nature that gives each life our value, or there are no equal human rights at all.

In our hearts, we know this to be true.

I hear from women whose hearts are broken over abortion, saying over and over in an endless variety of ways that you can make your choice, but you cannot escape the consequences of your choice. Shame after abortion was, for them, immediate and often overwhelming. But the answer isn’t to try to live down the shame or swing the other extreme to shameless shouting.

Women shirking that shame also lose the ability to see their own bullying, which lies at the heart of abortion. Having bought into the myth of bodily autonomy, they’ve thrown their conscience out with the baby.

And how can you rehab a bully when the rules in place are in their favor? Beyond respect for rules, the most effective interventions involve building conscience and empathy.

So, while a generation of young women gratefully sigh their relief for “compassionate” abortion allies, the positive power of shame, deployed properly, begins the healing journey to peace with God, self and others after abortion.

And, yes, abortion is always a spiritual issue because it is always a matter of life and death. True compassion demands that we defend the lives of the youngest members of the human family, point women to the abundant resources to help with their needs and affirm that it’s possible to live shame-free through spiritual recovery after abortion.

Those of us who oppose abortion are doing well with the sternness piece. But if, in doing so, we can’t also extend grace to match our truth, how will anyone trust our empathy is true?