'Greatest Showman' Is the Feel-good Movie of the Century

Kimberly Fletcher
|
Posted: Feb 12, 2018 7:47 AM
Share   Tweet
The opinions expressed by columnists are their own and do not necessarily represent the views of Townhall.com. 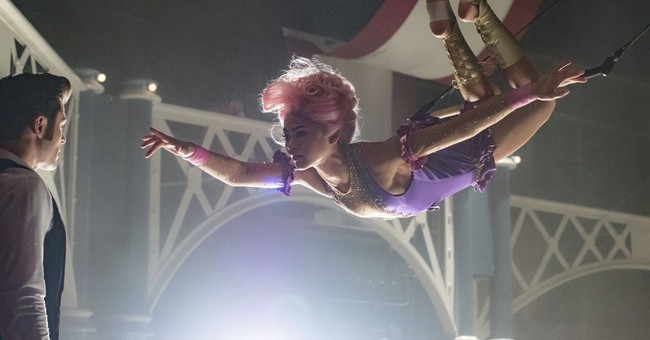 I’ve seen the film five times myself and I’m calculating how many more times I can see it before it leaves the theater. Alexa has the soundtrack on endless repeat (much to my husband’s chagrin), and I have my children doing Google searches to find out how much time I have to wait for the DVD to be released. My friends are wondering if I need an intervention but since many of them have seen the film at least 10 times they really have no room to talk.

So, why is it so many people—especially women—love this film? The answer is pretty simple. We’re all looking for a good message and a little joy in our lives. Greatest Showman more than delivers. From the very first beat of the epic soundtrack to the crescendo of the last solitary note audiences are captivated by the music, the story, and the powerful message. It is the feel-good movie of the century celebrating life, inspiring dreams, honoring marriage, and treasuring family.

The film is filled with life lessons wrapped in a captivating story the whole family can enjoy. The acting is exceptional, choreography flawless and editing absolutely phenomenal. But it is the powerful messages of the film that inspire emotions, draw us in and keep us coming back for more. Many critics have focused on the inaccuracies of the film in portraying the real life of PT Barnum but that isn’t what the film was about and it doesn’t mean the messages of the film aren’t filled with truth. That is what we should focus on. These nuggets of truth are reflected in some of my favorite quotes from the film.

“You don’t need everyone to love you.” –Charity Barnum

Charity, played by Michelle Williams, is by far my favorite character. She is the epitome of true grace and dignity—the kind of woman society should honor and emulate. Charity is extremely supportive of her husband and devoted to her family. She is kind, prudent, and strong. When Phineas becomes consumed with praise and recognition Charity lovingly reminds her husband that he doesn't need everyone to love him. He just needs a few good people.

Charity left a rich, lavish life to be with the man she loved and live in humble circumstances. Though they had very little she made everything the best it could be and was genuinely happy. Later, after Phineas falls from the height of his success and loses everything Charity’s character shines through when she tells her husband, “I never wanted more than the man I fell in love with.”

What a great message to remind us of what, and who, is really important in our lives.

No one ever made a difference by being like everyone else. –P.T. Barnum

Hugh Jackman does a fantastic job in the role of P.T. Barnum. Wolverine fans will be blown away! I love how he and the director welcome you to the show before it starts. Phineas Taylor (P.T.) Barnum, (played by Jackman) has big dreams and while he steps out of the norm to chase those dreams, he ends up trying to be like everyone else when he achieves them. His desire to be “more than he was” causes him to lose everything—including his family. That is when he realizes the value of his life in the eyes and hearts of those that really matter. He remembers what life is really about and that his family is the most important thing in it. Who wouldn’t love a message like that?

Phillip Carlisle is a wealthy, upper class producer when Phineas convinces him to join the show as a marketer. Phillip falls in love with Ann, a black trapeze artist, played by Zendaya. Phillip loves Ann but fears what his parents and others will think of their relationship. Eventually, love conquers, and he has the courage to stand up to his parents and be the change he wants to see in the world.

It isn’t always easy to stand up for what we know to be right and true but it is always courageous. What mom wouldn’t want her kids to experience that on the big screen?

"When you're careless with other people, you bring ruin upon yourself." -Jenny Lind

One of my favorite parts of the film is the storyline with Jenny Lind. It is a great tribute to the value of marriage and the significance of that commitment. Jenny falls in love with Phineas and becomes a woman scorned when he doesn’t act on her advances. In fact, he flees like Joseph fleeing Potiphar’s wife and goes straight back home to his family.

Phineas made some seriously poor decisions that led to that moment but the fact that he realized the gravity of the situation and left, totally redeems him. He took account of what he would gain and what he would lose and he was man enough to make the right choice. That’s the kind of man I want my boys to be.

There is a pesky reporter in the film that continuously writes bad reviews of Barnum’s shows. In one beautiful moment however, the reporter, Bennett, speaks truth, “I wouldn’t call it art, but putting all shapes and colors on stage with you—some might have even called it a celebration of humanity.”

Now I impatiently wait the release of the DVD. This is definitely a film worthy of that big screen TV my husband bought on Black Friday last year.