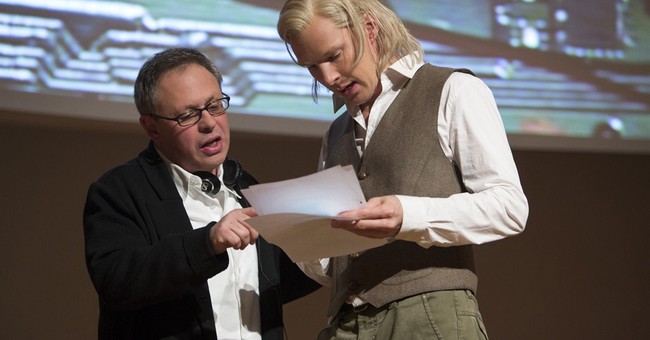 “The Fifth Estate” is a film that takes audiences inside the life of a paranoid, dissociative, manipulative and yet brilliant man named Julian Assange as he tries to take down the world as he sees it. Assange, is painfully brought to the screen by Benedict Cumberbatch who performs his role brilliantly. Playing a real-life modern-day figure while they are alive isn’t easy for any actor to do, but Cumberbatch sinks into the role quite well. Cumberbatch brings needed depth and humanity to Assange the Wikileaks leader as he undermines governments and corporations while dealing with his severe “Mommy” issues.

The films opens with an excellent montage highlighting the history of human communication before it jumps into the nascent beginnings of Wikileaks and Assange’s transformation from a “hacktivist” to a digital anarchist. The film does a great job in making sure its audience is firmly ensconced in Assange’s world before introducing the people he manipulates to become a part of his Wikileaks creation.

Assange’s co-host in anonymous leaking is Daniel Berg who is played by a masterful Daniel Bruhl (who starred in Ron Howard’s “Rush”) and he frankly steals the film. Daniel Berg, serving as Assange’s chief co-conspirator, is the conscious of the film. Each time Assange says that “Castro made a revolution happen with just eighty-two men” and wants to burn the world down, Berg is there to seemingly say… Why? Why do you want to do this?

“The Fifth Estate” is not being championed by the real Julian Assange and this may not be surprising, but the story told here is quite complimentary to him in many respects. There are more than a few comical moments that work well, but many more emotional or dramatic moments miss the mark. The middle third of “The Fifth Estate” feels muddled at times and it became difficult to keep track of which of the many leak cases is the seminal one which gets Wikileaks off the ground. Believe or not, they all seem to be alike and of equal importance.

The heart of Assange, at least the on-screen version, is best revealed via a key scene where Daniel’s parents invite Assange to their home for dinner. Assange becomes unable to deal with the normality and intimacy of Daniel’s family life and he rudely leaves before they eat. A “chaos man,” Assange only shows his humanity and humility when forced to do it. The film very ably captures the personal destruction Assange causes while portraying how he mega-maniacally misled the world on Wikileaks’ size and operation. The veritable one-man beginnings of Wikileaks are a revelation and in this digital age, frightening.

Stanley Tucci and Laura Linney are both excellent in their minor roles as State Department Chieftains defending their Department, their foreign contacts and their country from Wikileaks’ full frontal assault. However, Daniel Thewlis as the grizzled, seen-it-all Guardian Editor Nick Davies steals the back-end of the film. His command of each scene pulls you in and makes you feel as you are seeing the film through his eyes and not through Assange. That is quite a feat for any actor. As Assange comes under more and more scrutiny and more publicly known world-wide, he begins to crack. Ultimately, he begins to turn on those who helped him reach such lofty heights of sudden power.

The film’s storyline does a very good job examining the life and death morality and ethics at the heart of Assange and Wikileaks actions and this is one of the strengths of “The Fifth Estate.” The arrest and legal case of Private Manning is covered in the film and it provides a huge gut check for everyone involved in Wikileaks. The digital activists surrounding Assange foresaw the freedom they provided whistleblowers, but not what happened to the whistleblowers themselves after their secrets were revealed. It is to the filmmaker’s credit that they treated Manning as a human being and not simply a treasonous or heroic figure.

The film seems to subscribe some credit for the Arab Spring to Wikileaks before it ends with Assange addresses the audience via a “60 Minutes” interview and by speaking directly to the camera. Breaking the fourth wall is an interesting choice for this film as it brings about an intimacy that hadn’t existed previously. What Assange says here is pretty profound and a good entre for discussion of how we got to a Julian Assange and Wikileaks and what happens now that they are gone.

While “The Fifth Estate” is a troubled film, it is a good one for many people to see in order to catch up on the technological and social media revolutions of the past five years. Even the most technologically and politically-inclined news junkies will get a lot from this film. As Stanley Tucci’s character wisely intones, “Welcome to the revolution!” Yes, indeed.