Kevin McCullough
|
Posted: Aug 23, 2020 10:08 AM
Share   Tweet
The opinions expressed by columnists are their own and do not necessarily represent the views of Townhall.com. 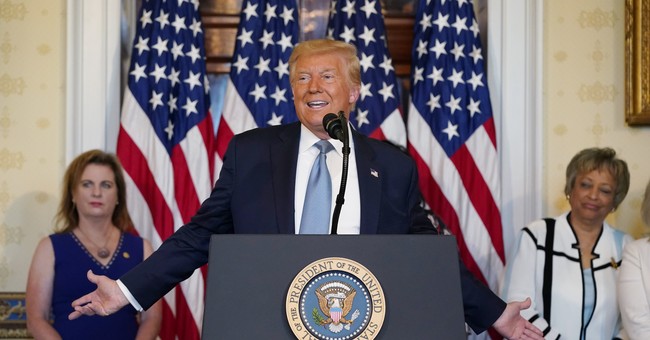 I didn’t hear him say the words. I was working in my studio on Friday and had just glanced at the television long enough to catch the lower chyron. And there it was: "President Trump: Where Biden sees American darkness, I see American greatness."

I eventually would go back and re-listen to President Trump’s extremely low key but upbeat and hope-filled speech to the Council for National Policy.

It was low on emotion, low on volume, very relaxed, and at times very funny.

But that line jumped off the screen when I saw it, and jumped out of the air when I heard it. And my suspicion is—you will hear it a lot in the week and days to come.

The Democrats made an enormous mistake in having the most negative, “America is the problem,” convention in history. They largely spoke about things that are untrue, irrelevant, or both. And the final visual they offered the world was their nominee on a stage at essentially a half full drive-in theater with tail lights blinking and horns honking.

No promises made about how to deal with the greatest challenges of our time. No promises of a new vision.

In fact they doubled down. Their nominee pledged to force mask mandates upon the American people. The day following he pledged to shut the economy back down if “scientists” tell him to.

So the use of force to mandate masks, and another artificial crash? That’s the vision?

As Trump continued to speak to the CNP, he laid out the challenges he faced the first three years in office. His undoing of 2,000 plus regulations on businesses, the tax reform in which the average family saw more than $2,000 of their own money returned to them, the appointment of 300 judges/justices, his ending of terrorist threats without starting additional wars, and the willingness to hold China and Russia accountable with some of the toughest dealings in history.

As he reeled off the list (considerably longer than this space allows for) you were reminded of something significant: why people “dislike” Trump.

Most Americans grow in their disdain for the president because over time they generally do what they promised they wouldn’t (“read my lips, no new taxes") or they promise a litany of things they will do, but end up only getting one or two completed (Obamacare, No Child Left Behind).

The Democrats foolishly tried to hit him on the handling of the economy. Very foolish indeed because now he gets to go remind people that “he grew the fastest, hottest growing economy in history once, and now he will do it again.” (By the way, three months of all time historic job creation and 10 million jobs created certainly underscore the point).

Before the artificial economic crash and the COVID lockdowns, the economy had more jobs available than unemployed people to find them. He can and will remind them of these facts.

That’s not to say that there isn’t a darkness in some parts of America that desperately need addressing.

The uncontrolled riots have become a major source of concern for the suburban female voter. The abject refusal to open schools are angering moms across cities and suburbia alike. Mayors and governors who treated their bosses (the voters) as their subjects with gestapo-like check-points, unexplained restrictions on small businesses, and gross abuse of executive powers all add to the feeling of helplessness for voters in those areas. But these areas are all run by Democrats.

For President Trump that just means those cities and states will have more voters seriously considering supporting his vision of growth, freedom, success and life.

Democrats know this too. On Friday I was scheduled for a TV hit to discuss the voter’s reactions to the DNC. My left-of-center opponent doing the hit was so incapable of just hearing my rationale he continually spoke over me until I called him out by saying “this is how the left operates: bully the conversation and silence the opposition.”

That same evening we had dinner with a group where a feisty Bernie Sanders supporter quietly confessed, “Trump’s going to win, and that’s why I’ve begun to focus exclusively on taking the Senate.”

This election is boiling down to some very simple elements.

Trust the guy who, in 47 years, hasn’t fixed even one of the problems he blames America’s darkness for?

Or the candidate who in three years kept 127 historic promises, and is confidently, quietly, but enthusiastically asking for the privilege to “do it again” when it comes to making America great?

My hunch is the American people will prefer greatness.

History says they always have!