Why Do the 2020 Democrats Lie About Everything?

Kevin McCullough
|
Posted: Mar 08, 2020 10:51 AM
Share   Tweet
The opinions expressed by columnists are their own and do not necessarily represent the views of Townhall.com. 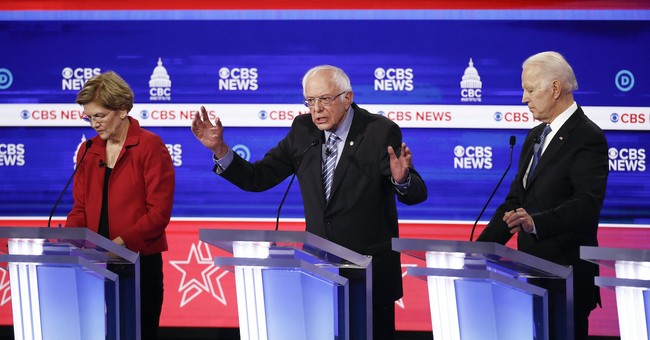 The Democratic leadership of 2020 will not tell you the truth about almost anything. They lie to everyone, at nearly every moment, about almost everything, all the time.

They lie to their opponents, to the voters, and of course, they lie to each other.

For instance, after clearly naming two associate Supreme Court justices, and pledging that they “would not know what hit” them, the highest-ranking Senate democrat claimed he never said what he in fact said.

From the same event, a congresswoman with a straight face, said to reporters that “abortions are safer than the extraction of wisdom teeth.” Really? Wisdom teeth end up doing more damage than killing a child every time one is performed?

“But lying about threatening opponents, or what is viewed (by Democrats) as a niche social issue, is not representative of everything they do,” I can hear some protesting.

Joe Biden and Bernie Sander continually evade the question when asked about how to pay for their health care ideas.

Bernie Sanders and Elizabeth Warren were asked repeatedly about how they would pay for Medicare for All. Other than nebulous “wealth tax” answers they couldn’t tell you. But with plans starting with costs of $92 billion to $1.3 trillion, even if you taxed every worker making more than $60k per year at 100 percent, it couldn’t be funded.

But no worries—the party that said that Pete Buttigieg won Iowa (with 6,000 fewer votes than Bernie), and took nearly a full week to get them counted—believes it can offer such an expansive program and run it with precision on less money than currently exists.

But if social issues and public policy basic facts are unimportant, imagine the dysfunction of a party who can’t stop lying to itself.

For the second time in four weeks, the Democratic National Committee has changed its own rules to the televised debate qualification. Just weeks ago they changed a fundamental requirement of the number of individual donors a campaign had so that an uber-wealthy billionaire could participate. Then late last week they change the rules to specifically exclude the only person of color (who happens to be female).

Long have the Democrats lauded how urgent it is to get money out of politics, and have falsely claimed that they were the superior party of inclusion. Turns out they don’t care about inclusion, diversity, or the “honest voice” of small-money donors.

They would literally be willing to sell their daughters into sex slavery, execute their own mothers, and sacrifice their sons to Satan himself if it promised a win in November.

They lie about the simple, verifiable differences in what sex a person is based on what someone “thinks” as opposed to what their anatomy tells them they are.

They lie about the capability to feel pain and survival chances of a pre-born, or even a newly born child.

They lie about the good of our closest ally Israel.

They lie about the danger of our enemies—Iran, ISIS, the Taliban.

They lie about the number of gun deaths we are dealing with.

They lie about the economy.

They are trying to lie about the number of people who don’t have jobs.

They are ok if you lie about your ethnic heritage as long as you are on their team. Translation: if you’re a white female but claim to be an American Indian—even only 1/1024 so—then you’re all good.

If you claim you don’t know what happened to your private servers (that you were never authorized to set up in the first place), and that you’ve no idea how more than 2,000 pieces of classified info got out, as long as you bleach-bit them, bash them with hammers, and tell people they are lost it’s all kosher.

If you claim that the other party is doing “quid pro quo” without proof but explicitly deny having done so—when you yourself bragged about it on tape... it just goes with the territory.

People, you can’t believe these folks, whether you’re a Republican, an Independent, or even a fellow Democrat attempting to run in their party.

There is nothing about them that rings honest. Nothing that speaks truth.

They are lying, Godless, Marxists. They want to destroy the most prosperous and free nation on earth.

And they would lie to each other, sell their sisters at auction, and kill their babies just to do so.