Kevin McCullough
|
Posted: Jun 09, 2019 9:22 AM
Share   Tweet
The opinions expressed by columnists are their own and do not necessarily represent the views of Townhall.com. 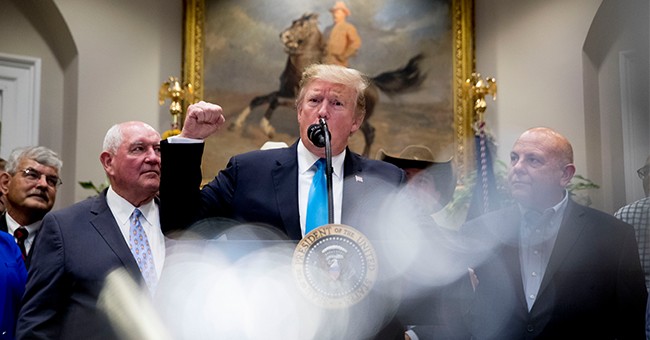 Can we please just agree to something here?

President Trump knows more about how the nations of the world will respond to tariffs than the “collective” wisdom of the rest of elective politics — combined.

Forget how uniquely inspiring he was on the international stage at the 75th Memorial of D-Day. Forget how Nancy Pelosi finally lost the President’s respect and got branded as “nervous.” Forget how regal he appeared with the royalty of the British Crown, or how easily he dispensed with the Mayor of London and the non-existent “hordes” of protestors.

Last week, while mostly overseas being madly “Presidential” on the biggest stage, for historic times, President Trump made major headway on an issue his opponents felt they had held him in check on.

Making more progress on his signature issue than all of the previous Presidents of the modern era—combined.

He did so even though the same whiney GOP members and Democrats dismayed at the “outcome,” and literally lying press outlets couldn’t even bring themselves to acknowledge his historic and landmark breakthrough.

In fact, they went so far as to attempt to make it appear as though he had capitulated on a crisis of his own making.

By week’s end, not only are sections of his promised wall being built, activated by his executive actions, separate from that of Congress, but now he has a partner in stopping the flow of “paid for” caravans, purposefully funded to assault the southern border.

Here’s just some of this huge win:

In getting these and additional points of agreement in writing the President has effectively established the entire nation of Mexico as a buffer zone to assist our daily overwhelmed forces at the border.

By encouraging and enlisting the help of a new partner in the enforcement of American immigration policy, the President will have single-handedly helped the populations of two nations simultaneously making both Mexico and America safe again.

For the last number of days Senate “Republicans” had seen their spines turn to jelly as the Mitt Romneys and others opined about their frets and concerns of enacting additional tariffs.

A Bloomberg reporter bemoaned the impact of the new tariffs’ impact “already” being experienced by the American tax-payer (*coughing* “huh liar” *cough*.)

Andrea Mitchell of NBC tweeted at the “relief” being given various groups once the President called off the tariffs. But she made zero mention of the actual assistance Mexico capitulated to in striking the deal.

The 2020 field feigned dismay at the President’s “self-created crisis” and his utter supposed failure in resolving it, thus requiring him to pull back his threat.

And after already stating this week that she felt the President belonged in prison, “Nervous Nancy” (Pelosi) attempted to demean the President as a bully who only gets his way with threats and intimidation.

She sought to imply as much even though it was Mexican administration members that had bee-lined it to Washington DC to get a deal hammered out before the President would return from Europe for several more days.

The keystone cops routine of idiot establishment Republicans, dishonest and dismayed Democrats, and fraudulent fake press printing fake outcomes of tariffs that never even went into effect would be comical if it weren’t so stomach-churning.

These people deserve to be ridiculed and run out of their professions. They no longer work in the interest of the American public.

And that should be a requirement—at a minimum—of getting to serve the American people.