Why are Democrats Opposing Americans in Every Way?

Kevin McCullough
|
Posted: Jan 20, 2019 2:20 PM
Share   Tweet
The opinions expressed by columnists are their own and do not necessarily represent the views of Townhall.com. 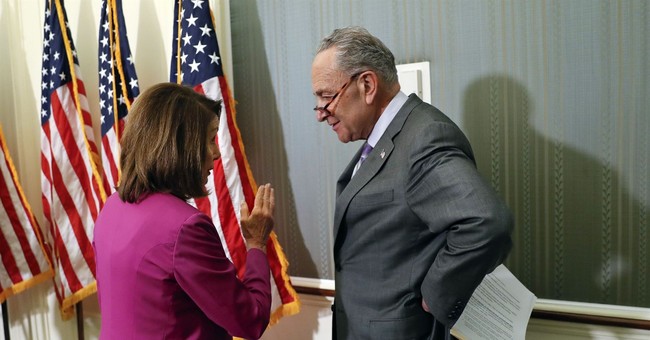 With the rejection of President Trump’s latest border security compromise Democrats have rejected security for Americans on many different levels.

This set of rejections adds to the growing list of recent weeks in which nearly every decision they make works against the citizens of the United States.

Even after repeated compromises (President Trump moving to a “steel slat” and away from a “wall”) and self-admissions of a barrier’s effectiveness (House Majority Leader Hoyer confessing “well of course walls work,”) they continue to harbor anti-American values and sentiment in their approach towards the current crisis.

Thus far they have rejected the number one demand of the voters in 2016 to reinforce our southern border with a permanent barrier.

They have decided that in order to ensure that they prevent such a barrier from being built that they would prefer to starve government workers merely to spite the American people.

They also decided to attempt to block the President’s lawful right to update the American people on the progress of the nation and what his administration intends to accomplish in 2019.

All three of these moves intentionally hurts Americans, leaves them less safe, and attempts to leave them uninformed in a nation that guarantees transparency.

In rejecting President Trump’s offer on Saturday they went a few steps further.

Besides the paltry sum of $5.7 billion he is requesting for the border barrier (paltry because the Democrats approved $40 billion during the Obama administration for identical purposes) they also rejected a few other key points.

A key point they are now rejecting (that they previously begged for—though this is the third time the President has offered it) is an extension of protections on nearly 700,000 “dreamers” (non-citizens who entered the country illegally but of no fault of their own due to ages at the time.) Rejecting these protections now for a third time, DACA kids really should ask themselves, “Who in this debate is honestly thinking about what’s best for me?”

An additional offer from the President would extend protections for 300,000 additional persons whose home countries are too dangerous to guarantee a safe return. The TPS offer when coupled with the DACA kids provides protections for nearly 1,000,000 non-citizens that evidently the Democrats for all their big talk of compassion don’t appear to give two hoots about.

His offer also includes close to a billion dollars in updated drug detection technology to be placed exclusively at ports of entry to obviously bring to a halt the flow of more than 90% of the heroin entering the country. This heroin is killing upwards of 300 of our children per week.

His proposal also wants to offer more Americans jobs, increasing the ranks of our border agents by more than 2700. He also pledged more law enforcement to assist the border agents for necessary manpower to actually secure the border and shut down illegal activity and persons attempting to harm America.

And for all those who are deeply concerned about the legitimate asylum seekers trying to eke out a better life in America, his program would provide 75 additional immigration judges to specifically lessen the wait times and backlog of asylum seekers.

Beyond this specific package he even dangled the willingness to bring to the table comprehensive immigration reform in short order.

So now Democrats aren’t merely opposing (with great hostility) the supporters of the President, the Republicans in Congress and the Senate, conservatives across the nation and at least half of the American voters.

Now they are also punishing 800,000 government workers (who largely voted for them.)

They are punishing the families whose lives have been and will be impacted by the continuing flow of heroin into our communities, along with the 300 families every week (15,000+ annually) whose children are dying from it.

They have now thrice rejected protections for a million seeking safe haven in America including 700,000 children who found themselves here through no choice that they made.

And they are preventing from the future security of thousands of asylum seekers, and most significantly the citizens of the nation itself with a truly secured border.

The Democrats are opposing Americans, those who wish to be Americans, and those that find themselves stuck somewhere in between.

The important question that each American should ask...