The Democrats 'Gas Tax' Is A Loser Idea That A Winning President Should Avoid!

Kevin McCullough
|
Posted: Nov 25, 2018 12:01 AM
Share   Tweet
The opinions expressed by columnists are their own and do not necessarily represent the views of Townhall.com. 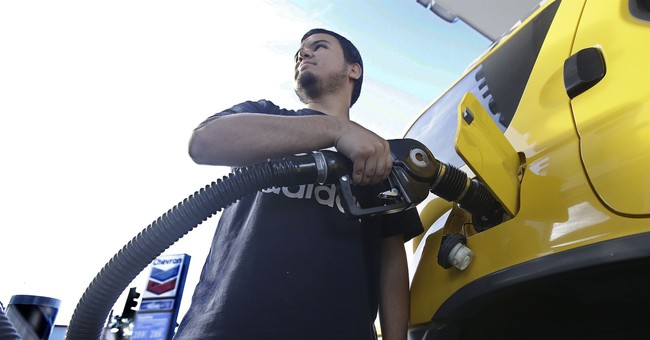 The Democrats are attempting to con President Trump into a decision that could end his bid for re-election.

The main reason you know it’s a horrible idea is that you are the one they are expecting to pay for it. And when’s the last time that Democrats ever forced you to pay for something you actually wanted?

Through politispeak-gobbledygook they have whispered to one another that they can convince President Trump to deliver them a multi-fold win—and, they think to themselves—we can crucify his re-election chances in 2020.

They are not wrong.

What they are seeking is to exploit the President’s campaign language of “addressing infrastructure” to convince him to install a national gasoline tax that would have you paying .30 cents a gallon to the coffers of Swampville (the federal government.)

“Just think of all the projects we could accomplish,” they rehearse to themselves as though they are whispering in his ear. “He’s such a savvy deal-maker—we’ll have him bite, and voila, we get the money—and—we can pummel him in 2020.”

They will attempt to sell it to Trump as a way to “build bipartisanship” and to simultaneously “keep an oft-discussed promise from his campaign.”

They do so knowing they will gain an upper hand that here-to-date they have been unable to get hold of.

Here’s some of the basic reasons Trump should decline their advances:

It disproportionately hurts his most valuable voters. Without question the Democrats are going to make a tough play for the rust belt in 2020. A consumption tax on gasoline will hardly impact urban commuters who are increasingly moving towards public transportation and already occupy blue strongholds. Rust belters drive. Some of them many miles a day to and from their jobs. And no matter how much their living standard may have improved .30 cents per gallon at the pump is a significant chunk of their hard earned raises, savings, and work. One estimate puts it at $405 per month per driver. (Obviously depending on average miles.) If the average factory worker and family just got their touted $2000 per year raise (crumbs to Nancy Pelosi), the gas tax wipes that out in less than half the year.

There is little guarantee that “infrastructure” ever sees a dime. In so many instances where government set asides are supposedly funded via taxes, why is it that so few of them ever make it to their ultimate destination. Taxes on gambling earnings have been promised to improve every state education system that has ever adopted them. Sadly many schools in those same locales consistently end up with worse educational experiences and the complaint by the teachers is always insufficient resources. Another tax, this time on something as vital as personal transportation isn’t something indulgent like gambling, it’s a hard need, and for the middle class more expensive than ever.

Republicans in Congress won’t necessarily help. Over the past week I’ve had opportunity to interact with a couple of elected Republicans — both in Congress. Both shook their head and agreed with my original sentiment that this tax will be seen as a betrayal of the Trump administration to the American voter. Then both went on to whisper under their breath, “but if we get infrastructure done, then we can claim we worked together with the other party.” The blank stare on my face in both conversations may have indicated what an idiotic “swampy” idea I believed their sell-out concession to be. If infrastructure is a priority to your district help Congress prioritize its values and get rid of waste, fraud, and useless spending. Since the feds reported record tax receipts for 2018 (as I predicted they would) there is proof that cutting taxes creates Government revenue. The real problem is spending. So spend wisely, make great choices, and don’t raise taxes.

Democrats don’t just want the tax, they want to take down Trump. Mr. President not a single one of your voters voted for you to raise a tax, to institute a tax, to invent a tax, or to justify a new tax. Your voters supported you—and I proudly among them—because your message that the swamp’s days were over represented economic renewal. To place taxes on a gallon of gas at .30 cents per gallon would be seen as a betrayal of that economic inspiration. The Democrats know this. They know it gives them something to pin on you, that they can then use to poke a whole in the rising balloon of making America great again. Such a tax will discourage your most ardent supporters—one’s in the rust belt that are hard earned for republicans to begin with. There is little need, zero actually, to push them away. It plays into Nancy Pelosi’s deviousness unnecessarily.

The Democrats will have taken 40 seats when the 2018 tallies are totaled. The map is even less friendly for the President’s allies in 2020. The way white hot economic growth begins to slow, before it begins to halt is for government to intrude in ways that hurt the voter.

A national gas tax of near .30 cents per gallon is the economic equivalent to the Obamacare mandate. In dollars in fact it comes very close to the same increases.

A national gas tax would have a similar devastating impact on the individual, small business, the entrepreneur, and the CEO.

I honestly believe that President Trump is savvy enough to see this coming. My earnest hope is that when the jedi-minding-vipers come to talk smooth words in hopes of getting their way, that President Trump just smiles and remembers, “These people are all about themselves...”