Why The Kavanaugh Confirmation Torpedos The Left’s Future

Kevin McCullough
|
Posted: Oct 07, 2018 12:01 AM
Share   Tweet
The opinions expressed by columnists are their own and do not necessarily represent the views of Townhall.com. 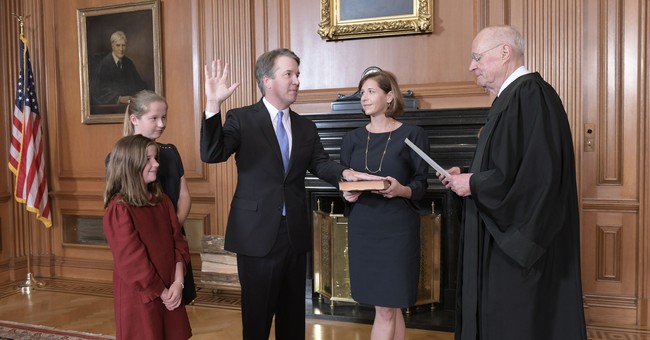 With the votes being cast on Saturday the 114th Justice of the Supreme Court will join his fellow justices on Tuesday ready to hear and deliberate the remaining case load for 2018.

Plenty has been said about how important this realty is and even further why his opponents fought so hard to keep him off.

It’s all about the future.

Everyone knew it, even the former judge (now Justice,) and everything was on the line.

More importantly because those involved played the hands they did there may be some yet truly unsettling realities for numbers of those involved (from the political left.)

Key to why the vote was as close as it was—in large measure—was due to the fact that the voters were ignored. When one considers the overwhelming support that Judge Kavanaugh enjoyed in Alaska, Montana, North Dakota, and Missouri the votes for him should have approached the mid-50’s.

If you considered where the judge enjoyed majority popular support but not by as large a margin the vote should have approached the upper sixties.

If he should have been confirmed on the pure basis of a spotless record and as previously confirmed circuit court jurist he deserved Ginsburg/Scalia like numbers of 95 or higher.

The outstanding significance of all of this is that foolish Democrats and one mind-blowingly stupid Republican will all have this vote attached to their record and that could move the Court but also the Senate in a decidedly more conservative direction for a generation or more.

Some of this coming elective tail winds should also motivate some coat-tails in House races. As wonderful as it will be to usher Heidi Heitkamp & Claire McCaskill to the private sector, welcoming Kavanaugh-supportive new comers from New Jersey, Michigan and elsewhere might also assist in local Congressional seats. For the first time in the 2018 election cycle am I hearing of republican “pick ups” instead of purely places where they were hoping to just “hold the line.”

This type of energy is being stoked across many factors given that the President, the base, and the candidates have a truly significant realization of what their vote should actually signify.

The Kavanaugh confirmation will likely go down as Senator McConnell & Chairman Grassley’s finest hour. Navigating the criminal conspiracy and obstruction of the Democratic left, they worked the process with tremendous wisdom: exposing and laying bare the evil intent while never crossing the line of minimizing legitimate concerns of the seriousness of sexual assault or its victims.

Even in doing so the Kavanaugh confirmation exposed the grotesque and genuinely insincere approach the left is willing to use people, in order to gain or keep power. The message going forward: the right demonstrates more care for assault victims.

Finally, the Kavanaugh confirmation establishes an originalist majority on the court that will begin to undo judicial activism that has run rampant for more than forty years. Judicial restraint, literal meaning, and original intent will be new hallmarks of the Supreme Court.

This is one of, if not the most, important reasons conservatives and evangelicals flocked to the ballot box for President Trump. It’s one of the major forces behind why so many never-Trump conservatives have now openly declared their newly found Trump loyalty for 2020. And considering two of the most liberal justices on the court are now north of eighty years of age there is still plenty of work to do on this point.

The Kavanaugh confirmation was sadly one of our nation’s ugliest seasons. Ultimately it should be the end of some presidential aspirations for Senate Judiciary Democrats.

It was the ugliest sequence of the politics of personal destruction our nation has ever witnessed.

Which is really the most encouraging significance of its outcome.

The good guy won. And now the American people will continue to win for a generation or more to come.

An historic moment decided ultimately by what was right, and not merely political.

May we all live to see this moment bear great fruit for America’s future!