Kevin McCullough
|
Posted: Feb 26, 2017 12:01 AM
Share   Tweet
The opinions expressed by columnists are their own and do not necessarily represent the views of Townhall.com. 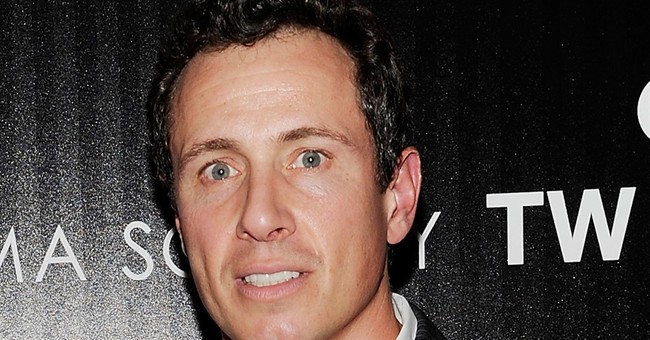 Chris Cuomo of CNN was asked by a Twitter user, on Thursday, a simple question: “What do you tell a 12 year old girl who doesn’t want to see a penis in the locker room?”

Considering Cuomo had nearly gone blind losing his mind over the outrage that the Trump administration had caused him this week in rescinding President Obama’s far-too-huge overreach or “guidance" in requiring 12-year-old girls to see penises in their locker rooms in the first place--it seemed a fair question.

Funny word that term “guidance” (fancy term for executive action that in essence threatened the local schools of America to comply with allowing penises into the 12 year old girls’ locker rooms across the nation OR they—team Obama—would withhold funds from said school districts' hot breakfast and lunch programs. So starve the poor kids if the school district disallows the showing of the penises to the 12–year-olds.)

Actually to say that Trump rescinded the “guidance” is an overstatement. He simply ripped it up, told the Supreme Court it was none of the federal government’s business, and will now allow the states to decide what each wishes to do on the local level. Federalism as it should be.

Since Cuomo is evidently a huge fan of penises in the 12-year-old girls’ locker rooms, he couldn’t restrain himself and literally got into a Twitter war with any and all that drew exception to his “worldview.” After some 90 tweets leveled at the Trump administration over a period of minutes, the question listed above was finally leveled at him.

“What do you tell a 12 year old girl who doesn’t want to see a penis in the locker room?”

It’s important to note that Cuomo is a father of not one but two daughters. So surely he has immense respect for the sacred bond between fathers and daughters. Surely he would take into account the still relative innocence fathers would like their daughters to still know at the pre-teen age of 12. Surely when he ridiculed disgraced congressman Anthony Weiner for sexting a picture of his penis while laying next to his own child to a 15-year-old girl, there was some understanding of the morality involved. Surely he would want to be that protective father that would wish to keep even the remote chance of sexual harassment or worse (assault) as far away from his own 12-year-old girls as they could ever possibly be.

So how did the man—who let’s face it, got his current gig because his dad was a governor and his brother is one now—respond in this incredibly opportune moment to answer a concerned father?

I quote, verbatim, without any editing: “I wonder if she is the problem or her overprotective and intolerant dad? teach tolerance.”

Forget the fact that he evidently failed capitalization & punctuation in grammar school, let’s break down the substance of his statement.

His first assumption is that it is first and foremost “a problem” for the said 12-year-old girl to not desire to see penises in her locker room. In other words if the girl at age 12 is not completely at ease with the presence of a penis being in her locker room space he—Chris Cuomo—is making the judgment that her ability to reason is faulty. That of course, what every 12-year-old girl should greatly desire to see in her (aka the girls’) locker room is practically nothing but penises.

His second assumption is that the girl is unable to make such a discernment of her own decision making. So much for empowering our girls to think for themselves. In other words she could only come to the decision that she was uncomfortable viewing penises at age 12 if in fact someone else made the decision for her, or brain washed her into thinking that it was a bad thing. It makes me wonder what advice he gives his daughter if while on a date some undesired penis appears and proceeds to date rape her. Is it still her inability to think for herself that would deem such an action as unwanted?

His third assumption is that for a father to give good guidance to his daughter it is done to be over protective, and that the daughter must deem her own father as someone who is intolerant. No healthy parent child relationship could be viewed in such a manner. Though I do wonder if Cuomo practices what he preaches if his own daughters will question him one day as to why he wasn’t more protective of their innocence when he had the chance.

And his solution to all of it?

Tolerate everyone... except for little girls… whose daddies love them… and who would like to stay young ladies, just a bit longer.

This is Chris Cuomo, a political legacy, and a major face on the second most watched news network in the world.

This is Chris Cuomo who spent nearly a hundred tweets defending this garbage.

This is Chris Cuomo father of two daughters.