Why The Prop 8 H8ters Lost 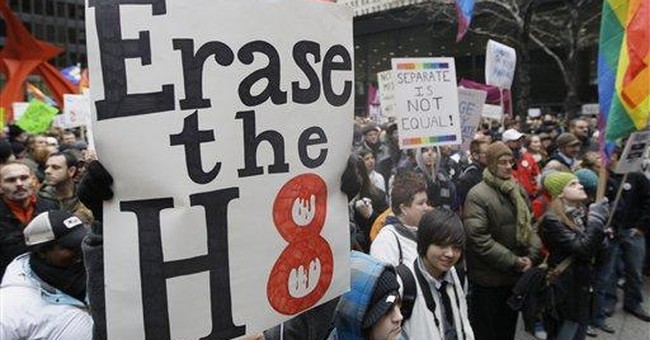 There has been much "hate" described in media reports since election day in the nation, much of it related to the passing of Prop 8 as a Constitutional Amendment for that state and as such is no longer touchable by a state sanctioned court. Yet hate has abounded, not from the corners of Jewish synagogues, Mormon temples, Christian churches or Catholic cathedrals. Those are just the places we've been told "hate" resides.

The "hate" was also not found in any single ethnicity, political party, or geographical demographic.

No the side that has been doing all of the hating since election day in the troubled parts of our nation have been militant activists radicals, who happen to be mostly white, mostly godless, and nearly completely all choose to engage in homosexual behavior.

It is the radical activists roaming the streets, pushing elderly women to the ground, staging obnoxious protests outside places of worship, and in some cases interfering in the midst of worship services that have expressed all of the hatred seen since election day. They have even taken to harassing people on their way to or from the church door and their car.

But these haters are ignorant and as such, many Christians, Mormons, Catholics, and Jews have shown compassion upon them.

How are they ignorant?

Secondly they don't seem to understand that those of us who choose not to engage in homosexuality, and even those who do--but do not take to acting like the equivalent of broodish animals--aren't fooled by what is attempting to be done. The activists keep marching, screaming and forcing spittle to fly in little old ladies faces, for what end? To change the definition of a word. Prop 8 didn't say that those who are protesting like wild coyotes can't create a contract in which every arrangement in life that they would like can be legally protected and allowed for. There is no discrimination going on against those who choose homosexual sex, they may still practice it, obsess about it, discuss it, believe it, and do it. But there is also no value in looking at the sacred sexual union of a man and a woman--with all the societal potential that such a union provides--and summarily saying that all other sexual unions should be considered the same exact thing. They are not the same biologically, emotionally, nor physically and it is easy to determine this.

Thirdly they are being grossly dishonest. No one has attempted to refuse a constitutional right to any of these persons. Marriage is a sacred union between a man and a woman. The society has a right to sanction such a union because of that union's potential to insure the future of that society. Those who engage in homosexual actions cannot conceive. Those who do, do so simulating either heterosexual behavior either with a human or via artificial means. But nonetheless the ingredients that are required must be present to bake the proverbial cake.

But further on this point those who engage in homosexual behavior are still under NO discrimination. They can legally protect their estate, visit their partners in hospitals, and even dictate the conditions under which fidelity to that union be observed or insure adulterous penalties.

In California, the civil union law is one of the most liberal in the nation. But even if it were not the drawing up of a legally binding document insuring rights is now, and has been available since before the term "gay marriage" was even considered.

The true reason that the radical activists wish Constitutional authority to be undone, is very simple. Those who have been displaying rage and hate at the houses of worship, publishing the names of people on blacklists on the internet and encouraging violence, harassment, and worse against Prop 8 supporters--ironically--is due to their desire to see "hate crimes legislation" not only be passed, but amended to include those they would label "religious bigots."

The activists here are merely mirroring the history in the Scandinavian nations, and Canada in wanting to silence anyone who disagrees with them. Eventually it will be considered a crime to even say that choosing to engage in homosexual activity is immoral, or unhealthy, or heaven forbid, just plain wrong.

The activists have displayed bigotry in their protests as well. Choosing not to protest churches in--shall we say "economically challenged" neighborhoods like--Compton, they instead of made primarily white voters the victim of their hate-filled tirades. And while it was 1.6 million Barack Obama voters--many black and latino--that really served to make the win the decisive victory for marriage that it turned out to be, they have shied away from the churches attended by these same groups.

The Prop 8 H8ters lost for simple reasons, they do not recognize Constitutional authority, they do not respect the disagreement of their opponent, they are dishonest with the facts, and they are far less tolerant than what the majority have ever endured from the most homophobic person they've ever met in person.

These points have been made to me in mail that I have received from--wait for it--homosexuals, who themselves are embarrassed by the animalistic tendencies of those who are garnering all the attention on newscasts these days.

I also publicly wonder if McCain supporters acted this way (who lost in just as big a fashion as did the opponents of Prop 8), how long they would be allowed on the street, threatening peaceful voters who had done their civic duty and voted their conscience.

These activists h8te God, they h8te those who believe in God, and ultimately their argument is with Him and against Him.

And if they believe America is uncomfortable as it is now, wait until they are faced with more eternal choices--should they choose to reject Him.