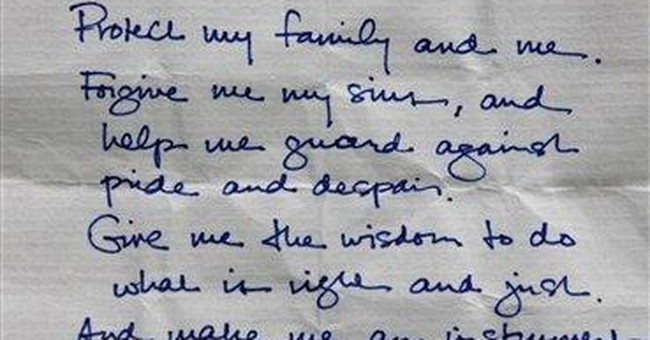 Protect my family and me. Forgive my sins, and help me guard against pride and despair. Give me the wisdom to do what is right and just. And make me an instrument of your will."

Thus Barack Obama is reported to have prayed at the Wailing Wall in Jerusalem this past week. With his hundreds of advisors, media, and handlers in tow Barack was taped by thousands of feet of video glancing up, then down, turning his back to the camera, fumbling around the area of the wall he was standing in front of and then sliding his very neatly penned prayer paper into a slit in the wall, touching and retouching it as if to say, "it's right here."

I wondered from the moment I saw him place it in the slit in the wall how long it would take someone to leak what he had written. We didn't have to wait long. And for all the bluster there has been in the blogosphere this week about what an "outrage" it was that someone removed the paper, and showed its content to the media, I had no doubt at all that it would in fact be released.

Feigned indignation about words written on a page is silly. It did not eradicate a prayer prayed by Obama to remove the slip of paper from the wall. It also did not mean that he had prayed the prayer, simply because he placed it there. Prayer is a direct communication to the Creator. And if Barack Obama offered a prayer at the Wailing Wall, God knew it, heard it, and answered it in less time than it took for Obama to find the secret spot.

So since I do not find it morally objectionable that someone found the paper and showed it to the press (and for all we know it could have been one the gaggles of the Obama posse that did so), let's look at the substance of what it says.

"Lord" - We can probably safely assume that he means either God the Father, or Jesus Christ. Since he did not specify (and perhaps did so purposefully to make it more appealing across the religious spectrum) we will just have to agree that we may never know.

"Protect my family and me." - A natural, earnest, and sincere sentiment. One also that is prayed each day by other fathers in America. Some of whom would like their local school districts to not push their daughters towards abortion without parental notice and consent. Daughters that aren't that much different from - Barack Obama's.

"Forgive me my sins, and help me guard against pride and despair." - On a purely theological note, if Barack Obama was in fact the evangelical Christian he claims to be, he would already understand that in a permanent sense his sins were forgiven at the moment of salvation. Yet it is refreshing to note that he is willing to express to the Almighty his dependency and need for help. Certainly something republicans and democrats alike all need help with.

"Give me the wisdom to do what is right and just." - Wisdom, righteousness, and justice are the exact legacy I personally wish to leave my children and the world after my time on earth is concluded. A worthy thing to ask to be certain. Yet it is a tricky one for Obama. Given the fact that he consistently KNOWS the RIGHT thing to do and doesn't do it, could cause one to think this expression is less than sincere. For example to know beyond a shadow of a doubt that the moment Michelle had given birth to either of his daughters that he was experiencing a miracle of an almost indescribable degree is amazing. To know that the little life that he held in his hands in those moments was so meticulously planned by that same Creator, should be evidence and clarity in spades. Why then would State Senator Obama be so insistent to advocate for the deaths - not of unborn children (which he certainly has) , but of children that had survived a procedure designed to take their life - yet had survived all the same. Is it wisdom, is it justice, is it righteousness to argue for the mandated killing of these innocent - born - children?

"And make me an instrument of your will." - Again a theological nuance but he did not capitalize "Y" in your, technically indicating he was not speaking to God. But let's agree he intended to. Should God use him as an "instrument," if he has no desire to reflect "His" will? As Barack Obama has promised to sign the Freedom of Choice Act as his first priority in office, what is consistent with God's will in the premeditated killing of children? Or in removing laws that establish their rights to know of the health and emotional consequences of what will happen to them, heightening the chances of contracting cancers of the breast or uterine? Or in removing the rights of the parents to lovingly guide their daughters to healthy choices about life, sex, and values? The Freedom of Choice Act, by his own admission his highest priority upon reaching office, would eradicate all of this progress and more.

Theologically speaking I find Obama's prayer humble, and something along the lines of what I endeavor to pray on a daily basis as well.

I just hope that Mr. Obama would pay attention to the words he penned, and allow them to change parts of him, that presently seem rather numb to the work of the Almighty.