Kevin Grieve
|
Posted: Apr 29, 2021 12:01 AM
Share   Tweet
The opinions expressed by columnists are their own and do not necessarily represent the views of Townhall.com. 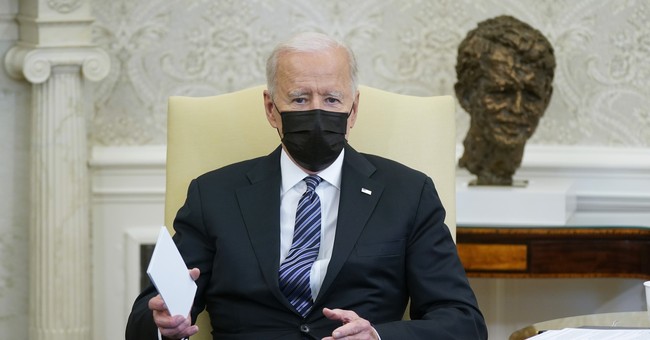 What actions should an individual conservative take to push back against today’s onslaught of cancel culture, loss of freedom, and the Left’s destruction of America?  What if you work full-time, protests aren’t your cup of tea, you don’t plan to run for political office, and you don’t have plans to become a conservative journalist anytime soon?

Action and defiance has a storied history in America:  Patrick Henry, Frederick Douglas, Susan B Anthony, Rosa Parks, and MLK. But what if you are not destined for the pages of the history books? You can still make your voice heard and your actions seen.  Courage begets courage. Compliance and silence only emboldens the Left. Vote with your dollars, adjust your behavior, and speak with your voice. Seven grassroots actions that conservatives should consider today or in the near future (from easy-to-hard).

MASKS - Masks are the visible manifestation of a lie; government propaganda to control the population.  Masks don’t work for source control nor contracting Covid-19.  The recent MIT study put a nail in the coffin of social distancing guidelines; 6 feet or 60 feet does not matter inside; Scott Atlas was right. Politicians have never followed their own rules anyway. Stop kowtowing to unelected, anti-science bureaucrats and stop wearing masks where and whenever possible, especially if: vaccinated, young and healthy, or you already had Covid.  Don’t put masks on your children, as they are not at risk.  Georgia mother Courtney Ann Taylor made her voice heard at a local school board meeting on the insanity of child mask mandates. If an establishment is overzealous with its mask wearing enforcement, take your money elsewhere. And vice-versa.

BIG MEDIA – If you haven’t already, dump your city newspaper; many of you already have; ad revenue for newspapers is down over 60 percent since 2008. If you want straight news, read Epoch Times and the Wall Street Journal or watch One America News. If you want center-right news and commentary, watch Fox News. If you want an array of balanced commentary, read RealClearPolitics.com. Support conservative media publications like Townhall, American Thinker, and PragerU. Support individual journalists via a subscription model like Glen Greenwald and Matt Taibbi on Substack, Ben Shapiro at the Daily Wire, and Glenn Beck at the Blaze. Continuously prune your media consumption and sources.  I was a regular reader of the Weekly Standard until they became rapid anti-Trumpers. The Weekly Standard shuttered its doors in December of 2018.

BIG TECH - Stop supporting the censorship tyrants of Big Tech. Birthed in the era of “information wants to be free," Big Tech has since engaged in shadow banning, demonetization, de-platforming, outright censorship, and shuttering of conservative accounts. According to the 2019 Congressional testimony of Dr. Robert Epstein, a Harvard PHD, research psychologist, and self-described Democrat, Google has the capability to sway the opinions of millions of voters by suppressing content and manipulating search results and did so to the benefit of Hilary Clinton in the 2016 election. This week, Judicial Watch exposed CA officials, Big Tech, and a communications firm linked to Biden that had coordinated “misinformation” censorship before the 2020 election. Use Bing, Yahoo, or DuckDuckGo instead of Google search. Use Protonmail or Reagan.com instead of gmail. Use Rumble instead of YouTube. Use Parler instead of Twitter.  Delete your Facebook account and use LinkedIn for networking.

BOYCOTT and BUYCOTT – If Delta, United, and American want to boycott Georgia, then boycott them and fly Southwest.  In 2016, when Colin Kaepernick started kneeling during the national anthem, I waited for NFL management to respond.  They did not, and, instead, doubled down. Many of you have pared back your sports consumption or stopped watching sports altogether. NFL ratings were down 20-25 percent in 2020.  The 2021 Super Bowl ratings were the lowest since 2007.  Coming into the 2020-21 season, NBA games on ABC — the league’s most important partner — were down 45 percent since 2011-12. On cable, it’s only slightly less damning. NBA broadcasts on TNT were down 40 percent and 20 percent on ESPN. Your actions are working.  Keep it up until sports management and players rediscover their fans and their original entertainment value.  You can do the same with Hollywood.  When the Left boycott’s conservative companies, buy their product.  Goya black bean sales were up 1000 percent after AOC called to boycott the company. Chick-fil-A more than doubled its sales after left-wing critics called for their boycott.

SCHOOL CHOICE – If your school is shifting from education to indoctrination, push back.  If you school is adopting Critical-Race-Theory curriculum (racism disguised as anti-racism), let your disagreement be known.  In a scathing 1,700-word letter Andrew Gutmann mailed to 650 families — a screed since gone viral —  he blasted the posh, all-girls Brearley School’s “cowardly and appalling lack of leadership [for] appeasing an anti-intellectual, illiberal mob.” If your school is not open due to Covid, go to a private school or home school. California public schools 2020-21 enrollment dropped by more than 160,000 which is eight times the historical departure amount. Homeschooling interest and applications are up significantly.  When it comes to college, a significant financial investment by a parent or student, consider more conservative universities such as Hillsdale, Baylor, TCU, or Auburn. Don’t feed the illiberal academia beasts.

CAREER CHOICE –  Woke corporations like Coke train their employees to be “less white.” Cigna, one of the nation’s largest health insurers, used critical race theory in its training and told employees to not consider white men in hiring decisions.  If your employer is overtly Left or is pushing blatant racism training under the guise of diversity, equity, inclusion (inequality, discrimination, and mediocrity) then speak up. If it has become endemic, switch employers.

HOME LOCATION – Choosing where to live is the penultimate in “voting with your feet.”  If you are caught under an oppressive Left political monopoly (high taxes, burdensome regulations, and poor service), then leave that jurisdiction for greener, freer pastures.  Since the 1990s, California has lost more residents to other states than it has gained. Ben Shapiro moved his entire 75-person company from LA to Nashville, Tennessee.  Hewlett-Packard, Palantir, Charles Schwab, McKesson, and Tesla are all leaving California.

Recent census data show that Texas and Florida will pick up House seats while New York and California will lose seats. Covid lockdowns, work-from-home, and rising crime have led to an urban exodus.  According to the National Association of Home Builders, residents are moving from urban areas (which the Left has ruined) to small metro suburbs and small towns.

The reason these grassroots efforts have been so successful is that the Left resides in discretionary industries. The silent majority needs to be not so silent. Their actions are having an impact.