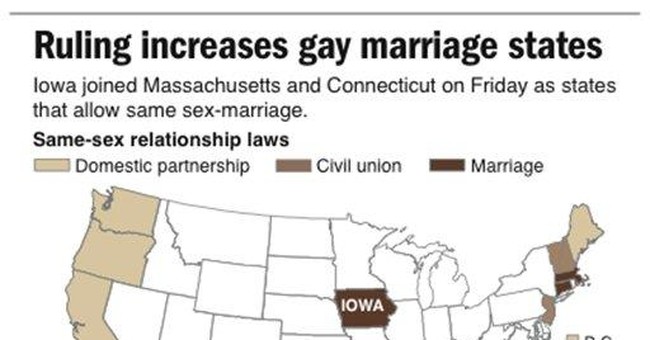 Iowa’s Supreme Court has now declared a constitutional right to same-sex marriage. The court’s claim to have dispassionately arrived at this decision is undermined by its comparison of this decision to prior cases about slavery and discrimination and by the Iowa court’s breaking with the U.S. Supreme Court while claiming to follow precedent. It will now be difficult for Iowa voters to ever decide this issue for themselves. Same-sex marriage has come to the Midwest by judicial decree.

On April 2, the Iowa Supreme Court held that the Iowa statute banning same-sex marriage violates the equal protection guarantee of the Iowa Constitution. The opinion was unanimous. There was no dissent, and no separate opinion. The Iowa court spoke with one voice to hold that the Iowa Constitution includes the right of homosexuals to marry, invalidating any state law to the contrary. Iowa joins Massachusetts and Connecticut in declaring gay marriage through judicial fiat.

Although the opinion is written with clarity and evenhanded language, the Iowa court chose to cast this issue in terms that show what the justices personally believe. It compared this case to two cases in the 1800s, one where it refused to support slavery and another where it refused to uphold a law banning women from being lawyers. The Iowa court pointed out that in both cases it arrived at these conclusions years before the U.S. Supreme Court, suggesting it considers itself to play a leading role in breaking new ground for equal rights.

Although the court said it was taking its equal protection cues from the U.S. Supreme Court, its opinion shows the Iowa court did the exact opposite on the only point that matters. Often in law you can set up a situation where if a court applies a certain legal test it will lead to the result you seek. For equal protection cases, the Iowa court decided that “heightened scrutiny” was appropriate for cases involving homosexuals. However, in the 1996 case Romer v. Evans, the U.S. Supreme Court held that heightened scrutiny does not apply to gays. Instead it applied minimal scrutiny, called the rational-basis test.

While that sounds technical, it decided this case. It’s very rare for a law to fail rational-basis review. However, heightened scrutiny (especially a form called “strict scrutiny”) is usually fatal to the law in question. By picking the test, you pick the result. And by ignoring the U.S. Supreme Court’s precedent, the Iowa court achieved the result it sought.

The Iowa Supreme Court’s decision is the final word on Iowa law. It can define Iowa’s Constitution however it pleases and cannot be reversed by the U.S. Supreme Court because there is no federal jurisdiction in this case.

The only recourse Iowans have is amending their state constitution, but this might be difficult. Iowa’s constitution requires that an amendment must be passed by two consecutive legislatures and then go to a vote by the people. That means the earliest that Iowans could finalize a constitutional amendment would be November of 2012.

In the meantime, the Iowa Supreme Court decision is the law of Iowa. Although the court could stay its own ruling until the people can vote on it, it’s a stretch to think a court that went to such lengths would delay the outcome for three years until the people can override this decision.

In a democratic republic, the people should rule through their elected legislators and executives. Judges decide cases of law, not of policy or morality.

Judges have the benefit of legal education and experience, but that does not make them morally superior. Complex questions of statutory interpretation or knowing which little-known precedents should govern a legal issue are the sort of questions that a law degree qualifies a person to decide. But questions of public policy, such as setting tax rates or managing the environment, are questions for the people to decide through their lawmakers.

Redefining marriage is a perfect example of a policy issue judges are not empowered to make. When judges overstep their constitutional role, it’s not just our rights that suffer, but democracy itself. Same-sex marriage has come to our front yards through America’s Heartland, and America didn’t even get to vote on it.