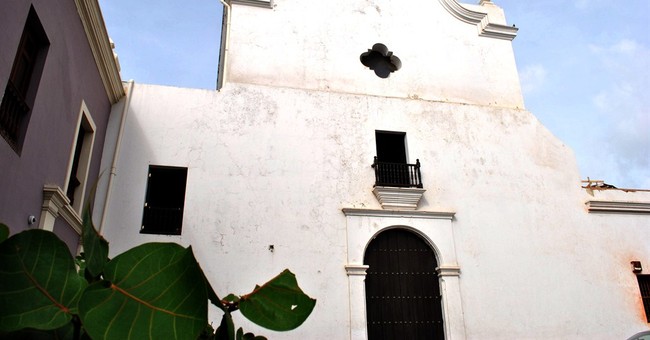 "The only foundation for . . . a republic is to be laid in Religion. Without this there can be no virtue, and without virtue there can be no liberty, and liberty is the object and life of all republican governments." -- Benjamin Rush

Conservative Christians like myself love quotes like this, and the nice thing for us is that there are so many to choose from. While the Left is quick to point out that it was the Enlightenment, not Christianity, that influenced the formation of our country and our constitution, our Founding Fathers did not for a moment suppose that the American experiment could succeed without the aid of religion -- hence the plethora of quotes like the one above.

Unfortunately, in recent decades religious liberty finds itself under siege. Progressive elites in academia and government insist that religion has never contributed anything positive to society and are doing everything in their considerable power to marginalize the role of faith in public life and narrow the definition of religious liberty to such a degree that it is effectively rendered void. This campaign to undermine the role of religion and its constitutional protections has been ratcheted up to new heights under President Obama.

During the 2008 presidential campaign, candidate Barack Obama gave a speech in which his views about the role of religion in society and religion's relationship to government were made clear. Regarding the challenge of taking his message to blue-collar, rural, and industrial sectors of the electorate he said the following:

"But the truth is that our challenge is to get people persuaded that we can make progress when there's no evidence of that in their daily lives. You go into some of these small towns in Pennsylvania, Ohio -- a lot of small towns in the Midwest, the jobs have been gone now for 25 years, and nothing's replaced them. And they fell through the Clinton administration and the Bush administration. And each successive administration has said that somehow these communities are going to regenerate. And they have not. So it's not surprising then that they get bitter, and they cling to guns or religion, or antipathy toward people who aren't like them, or anti-immigrant sentiment, or, you know, anti-trade sentiment [as] a way to explain their frustrations."

For the most part, this is typical stump speech fodder. Mr. Obama was speaking to a friendly crowd of west coast urbanites and was offering a patronizing psychoanalysis of the rubes in flyover country. His words are revealing, however. Essentially, the Progressive candidate was suggesting that the only reason people "cling" to religion in this day and age is because they feel that government isn't properly fulfilling its role in their lives. If government was functioning like it's supposed to, so the argument goes, people wouldn't need to place their faith in "things hoped for and unseen." Government would not only meet all their needs, it would inculcate in them the values and vision of godless secularism. Traditional morality (the product of religion) would be replaced with a Progressive orthodoxy that values radical freedom in the realm of sex and radical government control in pretty much every other realm.

William J. Haun recently analyzed this phenomenon in a piece for Public Discourse, in which he drew a connection between the American Left's narrowing interpretation of religious liberty and the moral philosophy of Jean Jacques Rousseau. Like today's Progressive, Rousseau subscribed to a very particular idea of the role that religion should play in the formation of virtuous citizens. He believed that it should play little to no role at all, since fealty to an unseen god undercuts fealty to the government, and thus, to the common good. The practical result of this way of thinking is a "conditional" view of religious liberty, and this is what we're seeing at work today with things like the HHS Mandate and the push to redefine marriage. Essentially, the President and his ideological brethren believe it is okay to have personal religious beliefs and to worship the god of one's choosing in private or at church on Sunday, but they reject the notion that religion-derived moral principles should be permitted to influence public life or public policy in any way.

Not only is this way of thinking hostile to the health of the commons, it is completely at odds with America's intellectual and moral heritage. From Haun's article:

"The founders saw America's religious vibrancy and diversity as essential -- or as George Washington said in his Farewell Address, an 'indispensable support' -- for civic formation. While this view rejected the idea of an established national church, it allowed religion to flourish through debate and diversity -- akin to James Madison's description in Federalist 10 of the flourishing of republican government through diverse political interests -- and offered a basic rationale for individual freedom: the soul needs to remain sovereign. . .

Implicit in this view of religion's role in civic life is not only a broad terrain for conscience, but also restraint on the government's role. Only a government that refrains from dominating the usual spheres of moral and religious development -- the family, the church, the school, and civic associations -- can reasonably encourage growth in virtue through religious practice and defer to conscientious objections."

This is what the Founding Fathers meant when they constructed a "wall of separation between Church and State." The foremost concern was not freedom from religion, it was a legally and culturally protected sphere within which religion can perform its vital social function of citizen-formation. John Adams was absolutely correct when he asserted that "Our Constitution was made only for a moral and religious people. It is wholly inadequate to the government of any other." He knew that the success of the American experiment was contingent upon the character of the people, and that religion is vital to the cultivation of sound character. He also recognized that many of the principles contained within the Constitution were derived from inherently religious principles, specifically those principles that flow from the Judeo-Christian tradition.

So what happens when society's political leaders and culture-shapers reject this understanding of liberty and its relationship to religion? Haun continues:

"[A]s the government’s power grows in the areas reserved for citizen-formation, it begins to supplant religion in that role. This diminished place for religion as a civic teacher leaves room only for religious believers that fit the state's view of virtue, while rendering dissenters an annoyance to be placated at best, and a hostile force to be marginalized at worst.

The philosopher Jean-Jacques Rousseau, whose work heavily influenced a separate experiment in liberalism, the French Revolution, thought that the state should determine religion’s educational role. In his famous work, 'The Social Contract,' Rousseau argues that the division between the Master of conscience and the masters of the state justifies limiting religion’s educational power to matters of little or no concern to the community. Where the community is concerned, however, there will be a civic religion with the goal of 'binding the hearts of citizens to the State.' Citizens can maintain purely private religious opinions on matters unimportant for societal order, but to Rousseau, 'the Sovereign is sole judge of what is important.' Dissent from the state’s goals cannot be tolerated."

A Rousseauian intolerance for the dictates of religious conscience is exactly what we're seeing play out with things like the HHS Mandate and the ongoing debate over the definition of marriage. If you are part of the shrinking remnant that believes religious beliefs have a role to play in adjudicating these issues, then you are an impediment to progress and must be neutralized.

It is absolutely no exaggeration to say that the anti-religionists who run our government today and the culture that supports them want to put government in the place of God. Under their vision, government is all knowing and should be all powerful. Perhaps the NSA scandal will cause some to reconsider this position. This issue illustrates perfectly the dangers we face when the government sets itself up as the ultimate authority on matters of human liberty. With no higher authority to appeal to, the people have to be content with the judgment of their leaders. If the government can dream up a justification for its growing train of abuses and usurpations, then the question is settled and there's nothing to be done.

This is not liberty, and it is most certainly not the vision that our Founders had when they drafted our Constitution. It is tyranny, plain and simple. It is what happens to a nation when we "evolve past" our need for God and substitute government in his stead.

It Sure Looks Like CBS News Edited Body Cam Footage to Omit a Key Frame in Adam Toledo Shooting
Matt Vespa
Far Left Forces Biden to Cave on a Trump Immigration Initiative, Which Only Shows It Was a Good Policy
Matt Vespa
'Where the Hell is Joe Biden?': VP Harris Welcomes the Prime Minister of Japan
Katie Pavlich
Unlike Fauci, Ron DeSantis Had a Scientifically-Accurate Take on COVID Vaccinations
Matt Vespa