Slavery in the Land of the Free 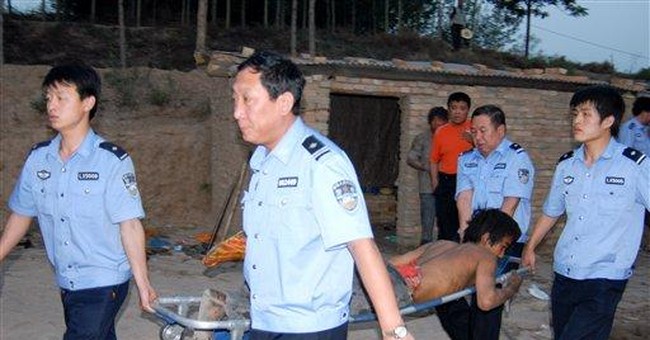 Children in the US grow up hearing about the slavery that plagued America from its founding until the Civil War. The death blow was struck by Lincoln's Emancipation Proclamation, which proclaimed that "all persons held as slaves" in the rebel states "shall be then, thenceforward, and forever free." This proclamation sounded the beginning of the end for slavery in the United States. Or did it?

Unfortunately, slavery is still a widespread practice all over the world, including the US. The Civil War may have removed the public sanction of slavery, but it is still a common underground practice. Journalist Benjamin Skinner undertook four years of undercover investigation into "human trafficking" (a euphemism for slavery) in order to increase awareness of this international injustice. His research and experiences are chronicled in his recent book, "A Crime So Monstrous." Skinner posed as a customer at underground brothels in several countries in order to get a better picture of the realities of the slave trade. He was exposed to many heart-wrenching human abuses, including being offered a young woman with Down syndrome for a used car.

Skinner's interview with Salon magazine provides a disturbing look at a widespread practice of which most Americans are unaware. Skinner explains that, "'There are more slaves today than at any point in human history.'" Indeed, according to the recently released Department of State's "Trafficking In Persons Report", the International Labor Organization (a UN agency) "Estimates that there are 12.3 million people in forced labor, bonded labor, forced child labor, and sexual servitude at any given time; other estimates range from 4 million to 27 million."

These numbers are not confined to third world countries. The same Department of State report estimates that 800,000 persons are trafficked in the United States every year. Of these, 80% are female, and over 50% are minors. A CIA report indicates that 45,000-50,000 of the trafficked women and children were brought into the US under false pretenses and pushed into prostitution or forced labor. The worldwide circumstances of slavery vary widely. Many of the slaves in the United States are "employed" in brothels, striving to repay a debt to those who brought them into the country—a debt with terms that can never be fulfilled. In other countries indentured servitude is common—men, women, and children strive for many years, even lifetimes, to work off the "terms" of a small debt incurred by their parents or grandparents.

These numbers are sickening and hard to grasp, but more disturbing are the failures of the justice system to stop this profitable "industry". In 2000, only 76 cases of slavery were prosecuted by the United States Department of Justice, and there is not a single shelter for trafficked persons in the United States. While the US has taken some steps in the right direction, according to Skinner the U.N. has remained "tepid and afraid of offending member states." In 1999, the U.N decided to forego the term "slavery" in favor of "intertribal abductions" in order to be more diplomatic.

This weak response to slavery is outrageous. The modern slave trade has become a $9 billion industry, and human beings are traded for as little as $1000 or a used car. Not only is the justice system failing, but so are churches, private charities, and individuals. Most are not even aware of this plague of injustice, and very few are taking action to stop the trade or help the slaves.

The slave trade strikes at the core of human dignity—it encourages those involved to view people as mere property to be bought and sold. This practice degrades human dignity and fosters the view that slaves are property whose lives are worth only as much as their practical value to their owners. The Apostle Paul condemned slave traders, listing them among perjurers, murderers, perverts, and those who kill their parents. (1 Tim. 1:9-10 NIV)

Those who trade men and women like animals devalue their human nature. Inequality of human worth is at the heart of slavery—a trader who buys or sells other people views them as mere tools for labor, monetary gain, or sexual perversions. The American Founders proclaimed the equality of all human beings, and their declaration has been realized increasingly throughout the history of the United States. This realization can be expanded if people wake up to the reality of today's underground slave trade.

The fact that 800,000 people are trafficked in the US annually is a sad testament to the justice system in a nation which has supposedly banned slavery and affirmed the equality of all human beings. The slave traders themselves ought to be the targets of severe punishment—not, as is all too common, the slaves themselves. The mockery, punishment, and neglect of sexual slaves (among others) adds to the injustices of slavery. Men, women, and children are unlikely to flee their captors if they have nowhere to go. Herein lies a great opportunity for churches, charities, and individuals to minister to the poor and needy. Christians ought to extend lifelines to those who are enslaved, providing food, clothing, and shelter to those in need. Through such aid, these oppressed individuals can take the first steps to becoming free, independent, and self-sufficient members of society.

In the Emancipation Proclamation, Abraham Lincoln called for the elimination of slavery on the basis of human justice. He declared that granting the slaves freedom was "sincerely believed to be an act of justice," and he invoked "the considerate judgment of mankind and the gracious favor of Almighty God." Those who seek a just society must call for the end of the underground slave trade and insist on vigorous prosecution of those who trade humans like cattle. They must also extend works of mercy to the individuals who suffer from this pernicious practice.

Trump Needs to Stop Talking to the Liberal Media, But He Won't
Townhall
Rachel Vindman vows to harass Gov. Ron DeSantis again and again because he deserves it
Twitchy
Report: White House in Disarray as They Eye a Major Shake-Up
Redstate
The Left Is Hoping DeSantis Botches Hurricane Response. Here's What They Didn't Count On.
PJ Media