Voting is Our Civic Obligation 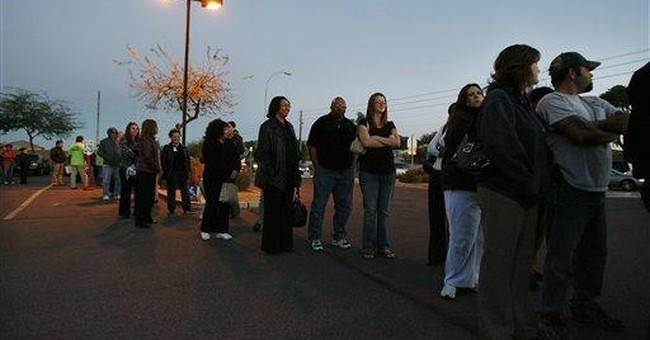 With last Tuesday's voter turnout, American voters appear on pace to break primary turnout records this 2008 election season. It seems that citizens are finally beginning to take their civic responsibilities more seriously. After every election, many complain about the new President or Congress, but how many actually turn out to vote in a primary? Less than 25% in most primary elections, and even the general election hasn't brought out more than 56% of the registered American public since 1972.

It should be a cause for embarrassment that less than half of Americans registered to vote turn out when the highest office in our country is up for grabs. This country was founded on the hope that freedom could be preserved for all. This freedom is preserved through a representative system of government established on the basis of free elections by the common people. Voting is part of our duty as citizens to preserve our freedoms for future generations. Yet half of the people of this country find other things to do on our most important election day—a day which only comes once every four years.

This latest election turnout, however, is an encouraging sign that people may finally be taking their civic responsibilities more seriously. Through Super Tuesday, 27% appear to have turned out. If this trend continues, it would break the previous record of 25.9% set in 1972. Moreover, America's youth are turning out to vote at record pace. For instance, in Georgia, young people tripled their 2000 voting turnout, and in Tennessee the youth turnout was quadruple that of the 2000 turnout.

Perhaps this larger turnout is due to the significance of this election. It will, after all, decide the first new leader to come into office since the start of the War on Terror. It could decide the next several Supreme Court Justices, and thus the future of legal protections for unborn children. It will install a new a leader in the midst of turbulent economic waters. These concerns have contributed to the intensity of this election, as millions try to figure out who will best lead the country for the coming four years.

The War on Terror grew out of the roots of the September 11th, 2001 attack—an attack which changed the way Americans live. The Wars in Iraq and Afghanistan have been underway since shortly after the attack, and are still continuing to this day. The efforts in Iraq seem to be making progress, while reports from Afghanistan are less encouraging.

The troop count in Afghanistan is set to increase by 3200 Marines this spring, but officials are concerned that this will put too great a strain on the military unless Marines are siphoned away from Iraq. Meanwhile the total number of troops in Iraq is around 160,000, with another 28,000 in Afghanistan. With military forces strained and two conflicts not yet won, the next President will have difficult decisions to make in apportioning troops and taking steps to conclude both wars.

Of equal or perhaps even greater importance is the appointment of future Supreme Court Justices. Four of the current justices are over the age of seventy. By the end of this next President's term, the oldest justice, Stevens, will be 91 years old. This election may decide the face of the Supreme Court for the next several decades.

The importance of judicial appointments should be obvious when one considers the weighty matters on which Supreme Court justices have come to rule. Matters of life, liberty and human dignity are decided at their feet. What could be more important than deciding who among us will make those decisions?

The import of the Court's decisions is evidenced by the 1973 case of Roe v. Wade when the Supreme Court decided that a woman's right to privacy trumped the right to life of her unborn child. Since that ruling, the death toll from abortion has climbed to 48.5 million in America. With recent decisions about the rights of unborn children, there is a very real chance that Roe may be overturned by the Supreme court in the coming years.

In addition, important ethical decisions are required now that technology has unlocked our ability to manipulate human life in a petri dish. The possibilities are great, and ethical lines must be drawn to restrict "research" which destroys human life. Otherwise, our technology may soon come to undermine our own dignity. Undoubtedly, many of these bioethics decisions will come before the Supreme Court for review.

While the war and the Supreme Court have long been on Americans' minds, the economy has recently risen to the forefront. Nothing grabs the attention of a voter like his pocketbook, and the economy has certainly affected that. Activity in the service industry, which is measured by the Institute for Supply Management's non-manufacturing index, saw its steepest drop ever recently as it slid to its lowest point since the 9-11 attacks. Since the service industry accounts for three-fourths of the American economy, this is a sign that the nation is in significant financial trouble.

A turbulent economy always produces anxiety, and when people are anxious, they often look to the federal government for help. Most recently, the government responded to current economic anxieties by slashing interest rates and putting together a $152 billion stimulus package. Like it or not, the President has great sway over the financial well-being of the country. These coming four years will be characterized either by more taxing and spending or by trimming spending and lowering the deficit. Both policies will claim to fix the economy—but only one will provide true long-term solutions.

The War, the appointment of Supreme Court justices, and the Economy are but three of many concerns on the minds of Americans as they go to vote this Presidential election season. But the weight of these three alone should demonstrate to all the importance of taking seriously their civic responsibilities.