Ken Blackwell
|
Posted: Feb 28, 2022 12:01 AM
Share   Tweet
The opinions expressed by columnists are their own and do not necessarily represent the views of Townhall.com. 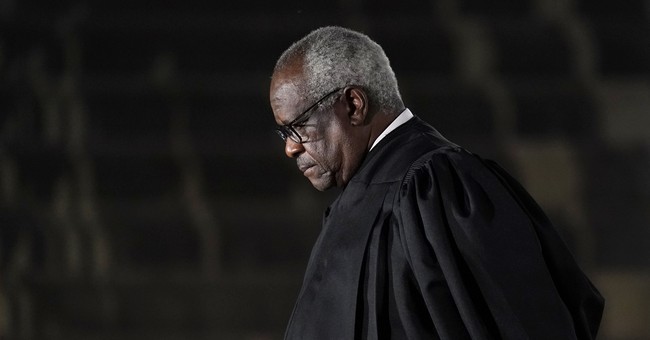 Editor's Note: This column is co-authored with Ed Meese.

The militant Left is attacking the principled public service of Justice Clarence Thomas again, this time by targeting his wife Ginni in a malicious attempt to delegitimize Supreme Court decisions that are faithful to the original meaning of the Constitution.

The Left has targeted Clarence all his career. We all saw his promise when President Ronald Reagan appointed him as assistant secretary of education for civil rights in 1981, and then promoted him at the first opportunity, nominating him as chairman of the Equal Employment Opportunity Commission (EEOC) in 1982.

The Reagan White House thought very highly of Clarence.  And in the next administration, we were thrilled to see President George H.W. Bush nominate this brilliant and principled young leader to be a judge on the U.S. Court of Appeals for the D.C. Circuit in 1990 to occupy the seat left vacant by another exceptional jurist, Judge Robert Bork.

President Bush could not have done better when he later nominated Clarence to the U.S. Supreme Court. Justice Thomas has been the Rock of Gibraltar, steadfast in his principled commitment to originalism, that the Constitution should be interpreted according to the meaning of its words when the American people adopted them, and that judges must faithfully adhere to the text of written laws, leaving it to elected leaders to decide when change is called for and to enact that change through the democratic process.

Yet in recent weeks, national publications have penned lengthy hit pieces on Ginni, who is not a public official. Ginni is outspoken in public life, but as a grassroots activist in the Republican Party and the conservative movement, not in the courtroom where her husband serves.  She has often been erroneously described as operating a lobbying company, but has not been a registered lobbyist since her husband joined the court.

What does Ginni do? She brings leaders and groups together to collaborate and share information and explore ways to synchronize messaging for greater impact. Her focus is on coalition-building, and working in the public affairs space to maximize impact of messaging for clients and causes she believes in.

The situation might be different if Ginni was engaged in litigation, such as arguing before a court or having her name appear on legal briefs, but she does not touch the courtroom arena. No matter how strongly she feels about a matter, she steps back if it moves toward litigation, even before it reaches the Supreme Court.

One recent smear involved breathlessly attacking Ginni for her leading role in the Impact Awards, celebrating leaders who put great effort into nonprofits and similar causes, often at great personal cost. This annual tradition fills a niche in the center-right movement, and it is astounding that anyone could find fault with it or spend time criticizing it.

Far gone on the days when a public official’s family was considered off limits to most journalists. But what is really going on here is much more insidious. It is a new low of targeting the latter for destruction in an effort to bring down the former.

This is the Cancel Culture taken to a level that threatens our institutions of government. What began years ago as the politics of personal destruction has metastasized into attempts to delegitimize a distinguished and senior member of the best-functioning branch of the federal government by smearing his wife for making a private-sector career out of her principles and patriotism, doing it in a manner that avoids an appearance of impropriety by not engaging in her husband’s realm of responsibility.

Such demonization must end. Citizens will no longer want to participate in our constitutional republic if they conclude that doing so will incur years of relentless harassment targeting their spouses. And federal judges in particular have lifetime appointments so they can rise above politics, and not be subject to a lifetime of political attacks. We must rise above this noxious miasma and frame these facts truthfully, starting with the Thomases.

That truth is this: Clarence and Ginni Thomas show how a top federal judge can have a patriotic spouse with a public career, where both can faithfully pursue their respective callings with honor and integrity.

We commend their example to our fellow citizens.

Ed Meese was the 75th attorney general of the United States and is the Ronald Reagan Distinguished Fellow Emeritus at the Heritage Foundation. Ken Blackwell was U.S. ambassador to the United Nations Human Rights Commission, and is an advisor to the America First Policy Institute.