John Adams: A Government of Laws, and Not Men, in Virginia

Ken Blackwell
|
Posted: Sep 16, 2017 9:21 AM
Share   Tweet
The opinions expressed by columnists are their own and do not necessarily represent the views of Townhall.com. 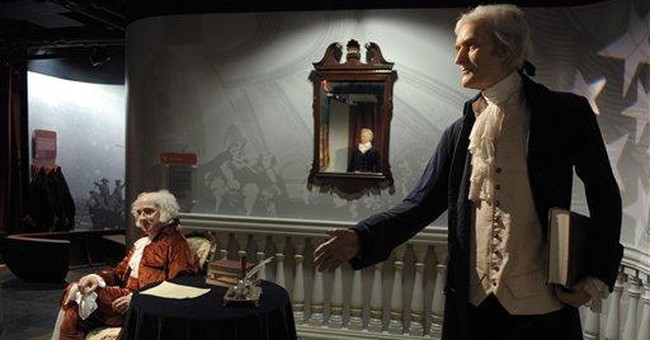 They say past is prologue. Let’s hope so in this fall’s election for Virginia attorney general. In a state of so many founders that advanced the cause of individual liberty, religious freedom and the rule of law, Republican John Adams is running for attorney general on a record and platform that fully embraces this cause. Not only does Virginia’s John Adams share the Massachusetts founder’s name and principles, but he’s actually related to Presidents John and John Quincy Adams.

The original John Adams talked famously of  “a government of laws, and not of men,” and his son John Quincy remarked that nipping “the shoots of arbitrary power in the bud is the only maxim which can ever preserve the liberties of any people.” If both were alive today, they would undoubtedly point to the Virginia’s Democratic Attorney General Mark Herring as example of arbitrary power and a government of men, not laws.

Virginia’s John Adams certainly is in his race against Herring.

First, however, it’s important to point out that Virginia John Adams is more than a name or bloodline. Much more. He’s a Virginian of great accomplishment, Born and raised in Chesterfield County, he attended local public schools before graduating with distinction (economics) from the Virginia Military Institute. At that time, he received his commission as on officer in the U.S. Navy. When his service there ended, Adams attended the University of Virginia School of Law on the GI Bill. Honors followed. He was managing editor the Virginia Law Review earned clerkships on the U.S. Court of Appeals in Washington, D.C., and Supreme Court Justice Clarence Thomas. He then worked as an Associate White House Counsel for President George W. Bush, while living in Arlington and starting his family with his Chesterfield born-and bread wife, Lisa. They moved back to Richmond after John’s White House years.  He led a team of more than 50 lawyers in the United States and abroad, and the Adams’ four sons attend the same public schools John and Lisa attended.

Now, this citizen-sailor is ready to rescue Virginia from a career politician who is running the attorney general office like he’s still a member of the Virginia Senate. Adams is committed to the rule of laws – and the Virginia and U.S. Constitutions – to reining in out-of-control government at the state and federal law, and returning the voters and their legislative representatives to their proper place in Virginia’s political order. And Herring? Not so much.

Adams has also roundly criticized AG Herring for hiring outside counsel when he does not agree with a particular the law or constitutional provision. Herring did just this when it came to defending Virginia’s voter ID law and its Constitution’s traditional marriage amendment. Adams vows to defend Virginia’s law and Constitution provisions instead of engaging in these costly political subterfuges, because that’s the job of the attorney general. As Virginia’s Daily editorialized, “Serving in this office doesn't mean you can pick cases like they're on an a la carte menu.”

Again, Adams favors the rule of law, not the rule of men. He has criticized former President Obama’s executive overreach in protecting illegal immigrants and Herring’s defense of Obama’s DACA executive orders. Adams has also said that Herring went beyond the law when he instructed Virginia colleges to give in-state tuition to illegal aliens.

Adams had represented clients filing a friend-of-the-court briefs challenging Obamacare’s contraceptive mandate. Herring has been a big backer of Obamacare and filed an amicus brief in defense of its premium tax credit provision.

Adams has pledged to “vigorously defend” the U.S. Constitution’s Second Amendment and safeguard the right to bear arms. Herring has voted for greater gun control in the past and advocated more of the same as Virginia attorney general. The NRA endorses Adams while labeling Herring as "one of the most anti-gun lawmakers In Virginia history.”

There’s more to John Adams than all this, of course. He’s particularly keen, for example, on combating the state’s heroin and opioid crisis. But this non-politician will do all this under the law – the codification of the people’s will – and all due respect for individual liberty. As the Republican candidate for Virginia attorney says, “I will not stand by while career politicians, social engineers, and progressive ideologues force their values on us and try to supplant our ideals and institutions with an oversized government they believe ‘knows better’ than we do.”

History and heritage from Massachusetts to Virginia echo in the words of this latest John Adams.