Ken Blackwell
|
Posted: Sep 10, 2016 12:01 AM
Share   Tweet
The opinions expressed by columnists are their own and do not necessarily represent the views of Townhall.com. 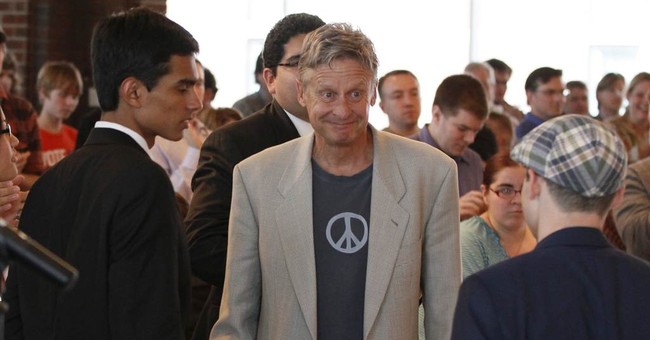 Record numbers of Americans are frustrated with the two major party candidates. Third party options are proliferating: there’s a libertarian, a “greenie,” and even an independent former CIA operative—at least, he says he’s former CIA.

No doubt, they all have some redeeming qualities, although the positions taken by the greenie, a recently-arrested Harvard-trained physician, suggest she might be taking too many of the meds she normally prescribes to others.

The libertarian is running ads arguing that the two-party system is outdated. I suppose that’s hardly a new argument coming from a third party, but the claim makes no more sense today than in the past.

Other than during the 1850s, when the slavery issue destroyed the dithering Whig Party, opening the way for the Republican Party, no third party has ever achieved major party status, for obvious mathematical reasons.

Even the greatest insurgencies flamed out. In 1912, flamboyant former Republican President Theodore Roosevelt launched the Progressive Party (Bull Moose), which took out his GOP successor and ushered into office the progressive Democrat Woodrow Wilson.

Strom Thurmond in 1948 and George Wallace in 1968 ran sectional campaigns, commanding 39 and 45 electoral votes respectively, but their candidacies did not affect the eventual results.

In 1992, a refreshingly candid Ross Perot garnered significant public attention and a debate invitation. While he flunked the Electoral College, his 19 percent draw of the popular vote from the GOP handed the presidency to Bill Clinton. Imagine having that as your chief political legacy!

But this year is supposed to be different. So a gaggle of unknowns and has-beens, including an economist who announced that he’s running as a write-in candidate, are seeking the presidency.

Still, it could have been even worse. Bill Kristol and some other “Never Trump” activists tried to find a high-profile third party opponent to challenge for the presidency or at least take a couple states in order to throw the election into the House of Representatives. There, they hoped, the GOP majority would choose the loser as president.

But even if the plot had worked, one must wonder about the credibility of a chief executive so chosen. Engineer into office the third-place finisher – someone decisively rejected by the vast majority of Americans? That person would take office not with a honeymoon but with the public demanding a “quickie” divorce.

Anyway, nobody has any illusions about the chance of anyone but a major party candidate winning. Even the libertarian admits he is campaigning to hit 15 percent in a couple of opinion polls in order to earn an invitation to the debates like Ross Perot did. Which begs the question, why run? Maybe he’s smoking something.

As much as we might wish for different choices, the contest will be between the two major candidates. That’s what our form of government, a democratic republic, demands. Third, fourth and fifth parties flourish and succeed in parliamentary systems, where also-rans form coalition governments. But that’s not the system we have in America. Third party candidates serve only to draw votes from one of the major parties – and throw the race to the one who would otherwise lose.

Everyone—well, most everyone, anyway—accepts that Donald Trump is not the ideal candidate.

But Trump believes in America. He knows government is not the solution for every problem, and he’s shown he can mobilize people to fight for what is right. And he’s not afraid of getting bad press – an exciting departure from what we’ve come to expect from every candidate.

Hillary Clinton offers a sharp contrast. She is portrayed as smart and determined. But after nearly three decades in the public eye, she’s scarred by scandals, most recently turning charity work into nothing more than influence-peddling.

She is also an architect of Big Government, having unsuccessfully promoted her own variant of Obamacare. And she was Barack Obama’s foreign policy guru during his first term, a dubious distinction. These “greatest hits” undoubtedly foreshadow her agenda if she ends up in the Oval Office.

The only thing obsolete about this election is the fiction that there is any practical alternative to the two major party candidates. The choice comes down to Clinton or Trump. Voting for anyone else might deliver a moment of smug satisfaction, but will only skew the outcome. On November 8, responsible Americans must focus on the very serious business of choosing one of two people to be our next president.