Do Not Close The Book On Carly Fiorina

Ken Blackwell
|
Posted: Feb 04, 2016 12:01 AM
Share   Tweet
The opinions expressed by columnists are their own and do not necessarily represent the views of Townhall.com. 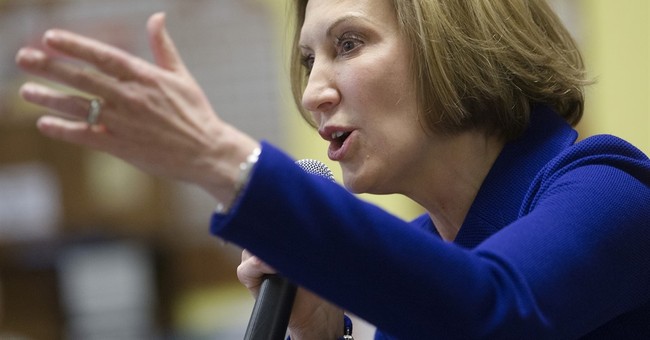 Scott Walker, Rick Perry, Bobby Jindal, Mike Huckabee and now Rand Paul.  All were considered to be serious candidates for the Republican nomination for president and all have dropped out.

Carly Fiorina began the campaign with far less name recognition, far less money, and yet her national profile has grown and when she speaks people hang on every word.  She has far outlasted the so-called heavyweights, do not count her out.

While I have yet to endorse  in the GOP presidential race, what has so impressed me about Carly is the drive, persistence and consistency she has shown throughout the entire process.  She is undaunted and undeterred, and that’s what it takes to go the distance when one plays at this level.

Carly’s campaign reflects the characteristics of her American dream life story.  She exceeds expectations, she innovates and persuades, she fashions a consensus and gets buy-in from others, she rises to a position of leadership and succeeds.

Less than a month after she announced her candidacy, in an interview with NBC’s Andrea Mitchell, she appeared she laid out a specific strategy to defeat ISIS – six months before the terrorist attacks in Paris and California. All of the other bigger names with more money only talked in generalities, Carly knew ahead of time what needed to be done; if that isn’t presidential I don’t know what is.

The contrast with Hillary Clinton and Barack Obama couldn’t be more clear.  Carly’s sober, specific approach – anticipating the problem before it happens – versus their numerous foreign policy failures and feckless policies that have left America and her allies vulnerable.

This is what Americans are looking for in their next president after eight years of frustration and disappointment.

Here at home Carly has been at the forefront of advocating for Republican leaders to take a far more aggressive stance on the key issues that matter so deeply to people.  Issues that, frankly, the GOP has promised action on but has too often capitulated when it came to crunch time.

Her call last September for former House Speaker John Boehner to resign, if he and Senate Majority Leader Mitch McConnell didn’t produce results was followed by his decision to do exactly that just a few weeks later.  She has repeatedly and publicly displayed the courage to challenge the status quo in Washington; she doesn’t put up with broken promises and empty lip-service.

No one has shown more courage than Carly when it comes to taking on Planned Parenthood in the aftermath of those staggering videos in which their officials casually and dismissively discuss trafficking for the body parts and organs of aborted babies.  She took an issue the media refused to touch, an issue politicians refused to touch, and put it squarely on the front burner while on a nationally televised debate stage.

This is a not a person who gives up, this is a leader who will fight as long as it takes to win.  There’s a reason why so many people continuously say they’d pay good money – as would I – to see Carly Fiorina debate Hillary Clinton.

Every conservative and Republican, whether they say so publicly or privately, would love to see that debate because it would be a slam dunk for Carly and a prelude to winning back the White House.

I hope she hangs in there for a long while. We all benefit!from her engagement!