Putin: Autocrat of All the "Russias" 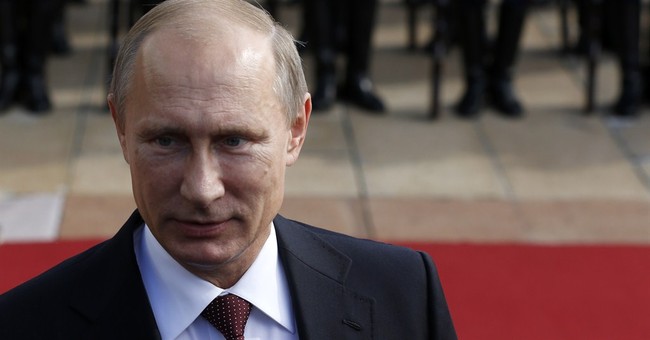 Vladimir Vladimirovich Putin is moving with a steady pace to establish his total control over Russia. He’s now pushing a law to help him deal with the last pesky parts of the post-Soviet period of Russian history—that annoying free press. In this Washington Post story, we see that President Putin is doing in Russia what Sen. Harry Reid and fifty-three of his Senate colleagues attempted to do recently with a constitutional amendment to limit free speech.

Putin knows he is fairly free to act on the world scene and at home. President Obama is distracted. His administration is perplexed. Having waited too long to address the threat of ISIS, Mr. Obama is now leaping into the ISIS crisis with both feet. And he is even willing to make the Russians our new partner in the Middle East.

Jackson Diehl, a respected foreign affairs columnist with the Post, has offered a withering critique of the Obama administration’s East European policy. There, in lands so recently freed from the smothering grip of the Russian bear, new leaders are emerging who are pulling their nations back into the Russian orbit. Think Crimea. Think Ukraine.

It is clear President Obama does not like to deal with foreign policy. He came into office eloquently promising to “fundamentally transform this country.” He is working overtime to achieve that goal. Obamacare is just the start. By taking over one-sixth of the U.S. economy and having unelected bureaucrats in Washington making life and death decisions for 320 million of us, the President is working toward his objective of bringing European-style socialism to America via democratic, or at least quasi-democratic, means.

To do this, he needs to have a break from foreign entanglements. Vladimir Putin will be only too glad to give him the break he wants. Putin’s foreign minister is happy to tell the ever-credulous Sec. of State John Kerry what Kerry wants to hear. Need help with ISIS? We Russians will be there. Would you like to “manage” the situation with Iran’s nuclear program? We can help. Need to deal with—or at least appear to deal with Syria’s weapons of mass destruction? We can throw you a line, Mr. President, a red line perhaps.

The latest missteps of the Obama administration are of a piece. Early in his tenure, Mr. Obama sent his erstwhile rival, Sec. of State Hillary Clinton, to meet with Russia’s Foreign Minister, Sergei Lavrov. Sec. Clinton gave the dour and determined Slav a bright red “Re-set” button. It was spelled wrong. And her State Department crack translators had forgotten that Russians use the Cyrillic, not our Latin, alphabet. We can still hear Madame Secretary’s manic cackle as the looming Lavrov deadpans: You got it wrong.

Did she ever! But George Stephanopoulos once said the Clintons have no shame—and that’s a great advantage in politics. Mrs. Clinton earlier this year gave an interview to BBC in which she boasted that the Obama Re-set with Russia was “a brilliant stroke.”

But, gee, too bad that meany Putin came back into power and upset the administration’s well-laid plans.

All that Putin has done is to take advantage of the promise that President Obama made to him—via his fully compliant partner, Dmitri Medvedev. Recall when President Obama met with the seat-warming President Medvedev in South Korea in the spring of 2012, he was caught on a hot mic informing the Russian: “Tell Vladimir I can be more flexible after the election.” Flexible? Clearly, Mr. Putin’s translators got that word to the Kremlin’s real boss. They doubtless translated it for him. What’s the Russian word for

It is not surprising that American publications like Forbes magazine and the journal Foreign Policy have pegged Vladimir Putin as the world’s most powerful leader.

He is a man who its the description of Russia’s ancient rulers, the Tsars. He is rapidly becoming“ autocrat of all the Russias.” It may never have been possible for Americans, without resort to a new cold war, to have stopped this from happening. But it is equally clear that nothing this administration has done has been more than a speed bump in Putin’s path to absolute power.

This grim reality bodes ill for freedom. John F. Kennedy famously said we Americans “shall pay any price, bear any burden, meet any hardship, support any friend, oppose any foe to assure the survival and the success of liberty.” Here at home, Americans fear their own government. Abroad, no one fears us. Under President Obama, the survival and success of liberty have never been so threatened.