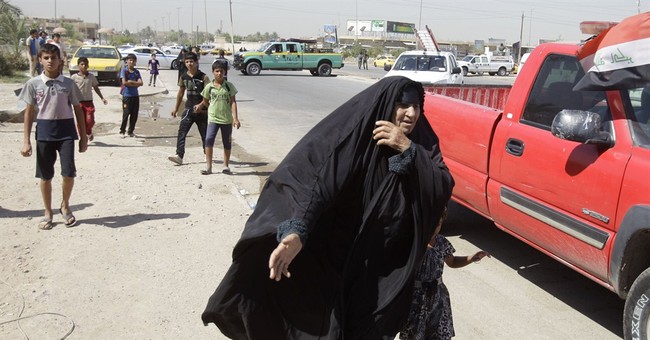 Some fifty-three percent of Americans told the Gallup Poll last spring they regarded the Iraq war as a mistake. The numbers were not evenly divided. The vast majority of Democrats (73%) say it was a mistake while only a minority (30%) of Republicans agree.

So, how should we think about this story in this week’s Washington Post: “Securing Iraqi Jews’ Past?” Staffers at our National Archives are restoring a “trove” of documents, photographs, books, and other records from the Iraqi Jewish community. Our troops uncovered this stash of Jewish memorabilia when we invaded Iraq in May, 2003. Many of these precious items were found in the blasted headquarters of Saddam Hussein’s Mukhabarat, the dreaded secret police of the Baathist regime in Baghdad.

This tranche of documents and artifacts is called the Iraqi Jewish Trove. It contains items hundreds of years old. They bear witness to an ancient Jewish community that survived until the 1960s. There had been pogroms and persecution, certainly, prior to that time. But with the establishment of the State of Israel in 1948, the condition of Jews throughout the Middle East became more perilous.

After the Israelis’ lightning victory in the Six-Day War in1967, Jews became the object of special hatred and torment in many Arab lands. Saddam Hussein, on seizing power in Iraq, sought popularity with the mob by publicly hanging Iraqi Jews in Baghdad. He said they were confessed Israeli spies. Faced with the prospect of torture, of being fed into wood chippers, there are few men who would not confess to anything Saddam’s sadists wanted to hear.

The National Archives is preparing to put these treasures on display in October and then to send them back to Iraq. Is this the right thing to do? Americans have paid more than $3 million repairing and restoring this record of Iraq’s historic Jewish community.

Question: Why would Iraqis want this Jewish Trove when they don’t want the Jews? The idea that Jews driven out of Baghdad over a forty-year period might want to come back is fanciful. But the simple fact is: They can’t come back. The Iraqi government that was installed by American arms doesn’t want the Jews to come back. It would not even allow them to come back.

Is this Iraqi Freedom? What is especially concerning here is that the history of the ancient Iraqi Christian community is showing every sign of paralleling that of Iraq’s Jews. When the U.S. invaded Iraq in 2003, there were two million Christians living there. Their churches and villages had been in Iraq since Bible times. But since being “liberated,” Iraq’s Muslims—Shia and Sunni—have driven all but 600,000
Iraqi Christians out of the country. Many of those exiled Christians—in historic communions whose names recall Bible peoples—Chaldeans and Assyrians—have fled to Syria.

Syria? How bad must post-Saddam Iraq be that Christians would seek refuge in Syria? We know from every day’s headlines that Bashar al-Assad is one of the worst despots on earth. It seems highly likely he has killed 100,000 of his own people, and has probably used chemical weapons in violation of all international law. The one thing this evil man seems not to be doing is slaughtering Christians, his own Christian minority or those seeking asylum from Iraq.

For that matter, what assurances have we gotten from Egypt that their military, which we lavishly fund, will protect the endangered Coptic Christian churches?

The Obama administration has embraced an idea of “democracy” that says whenever the local population votes, their decision must be respected. We saw how that turned out with the terror Gaza. They daily shower Israeli villages with rockets. Egypt’s Muslim Brotherhood won most of the votes in their 2012 elections—and immediately proceeded to harass and persecute Egypt’s Christians.

It’s not too late to re-orient U.S. foreign policy in this perennially troubled region. We should tell Iraq they can have their treasured Jewish books back when they welcome the descendants of the Jews who wrote those books.

In every area where U.S. diplomats have served in the Mideast, religious freedom has not been put on the back burner. That’s because religious freedom isn’t even in the kitchen. Because they fail to respect their neighbors who worship differently,
these countries are forever in turmoil. It won’t get any better until they think better of it.

In America, in 1776, a wealthy Catholic layman, Charles Carroll of Maryland, and a Presbyterian pastor, Rev. John Witherspoon of New Jersey, sat in Independence Hall together. They signed a Declaration asking the blessings of Providence on their Glorious Cause. And they pledged to each other “their lives, their fortunes, and their sacred honor.” We are the heirs of those good men.

As Americans, we should not be ashamed of our heritage of religious freedom. We should cherish it and view it as James Madison viewed it, “the lustre of our country.” We should insist that regimes we back, armies we arm, civil institutions we help must safeguard the religious freedom of the people they rule. This must apply to Jews, to Christians, and to Muslims. If they refuse, then we should shake the dust off our sandals and leave them to their own destructive hatreds.