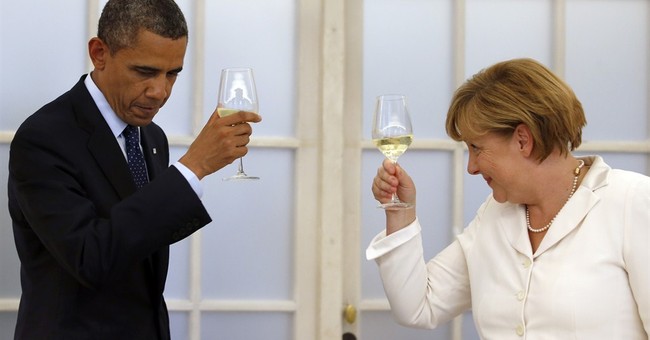 President Obama’s recent trip to the G-8 Summit in Belfast, Northern Ireland, included an address at the Waterfront hall. There, he criticized Catholic and Protestant schools and compared them to segregated schools in the U.S. when he was a boy. His remarks were hailed by British atheists. They took his speech for what it was: an attack on faith-based education everywhere.

Because issues like segregated schools and housing, lack of jobs and opportunity--symbols of history that are a source of pride for some and pain for others--these are not tangential to peace; they’re essential to it," said Obama. "If towns remain divided--if Catholics have their schools and buildings, and Protestants have theirs--if we can’t see ourselves in one another, if fear or resentment are allowed to harden, that encourages division. It discourages cooperation.

We cannot hear him liken Catholic and Protestant schools to racial segregation in America without a sense of alarm. Clearly, President Obama dismisses religious freedom as a basis for parents’ choosing different schools for their own children.

Mr. Obama’s own grandparents exercised their choice in sending him to Honolulu’s prestigious school, Punahou Academy. This pricey ($20,000/year) prep school was founded by Congregationalist missionaries. With roots in the faith-based community, it hardly qualifies as a segregation academy. Similarly, the president and Mrs. Obama have chosen Washington, D.C.’s very tony Sidwell Friends school for their daughters. They have every right to do so, but no one would credit this Quaker-founded school as part of a segregation system.

Mr. Obama has been zealous in trying to block other parents’ exercise of education choice. His administration has been eager to shut down Washington, D.C.’s Opportunity Scholarships. This program permits low-income parents of area students to choose a private or parochial school for their kids. Most of these scholarships go to minority students and many of them choose Catholic schools where a majority of their classmates are non-Catholic.

It is a shocking thing for the President of the United States to show such open hostility to faith-based schooling. As their motto goes, these are “schools you can believe in.” And the record of religious schools in America is a great one.

We need to see Mr. Obama’s comments in the context of his other polcies. His administration is pushing for ever more pre-K programs nationwide. Despite the documented failure of Head Start, he wants to enlist more very young children in school programs that will replace church-based child care and care in the home.

This is what secularists have wanted in our country, too: All children under the guise of the all-powerful state. This has always been a goal of Marxists.

We should not be surprised that President Obama, who attended Marxist scholars conferences in New York City when he was a student at Columbia University in 1983,

is so openly hostile to schools you can believe in.

The fact is that in Northern Ireland, the religious schools have been leaders in reconciling historic antagonisms. And this is true in America, too. Here, for example, Evangelicals, Lutherans, Orthodox Christians and Orthodox Jews have joined with Catholics in resisting the menacing HHS Mandate. That mandate is the gravest threat to religious freedom in this country since 1786.

Mr. Obama should re-read his Constitutional Law texts. There, he would find the landmark ruling of the Supreme Court in 1925, in Pierce v. Society of Sisters. The KKK had pushed through an Oregon referendum that outlawed private and religious schools.

The fundamental theory of liberty upon which all governments of this Union rest excludes any general power of the State to standardize its children by forcing them to accept instruction from public teachers only.

President Obama continues his relentless drive to “fundamentally transform America.” He does not appreciate the historic fact that religious freedom was the foundation for civil liberty in our country. Washington, Jefferson, and Madison all believed this. So did Protestants, Catholics, and Jews of the Founding Era. Respect for the convictions of others does not breed hostility. It is the beginning of civility.

The Pierce Court concluded with this ringing affirmation of parental rights and religious freedom:

The child is not the mere creature of the State; those who nurture him and direct his destiny have the right, coupled with the high duty, to recognize and prepare him for additional obligations.

Those “obligations” included then, and continue to include, our obligations to our Creator.