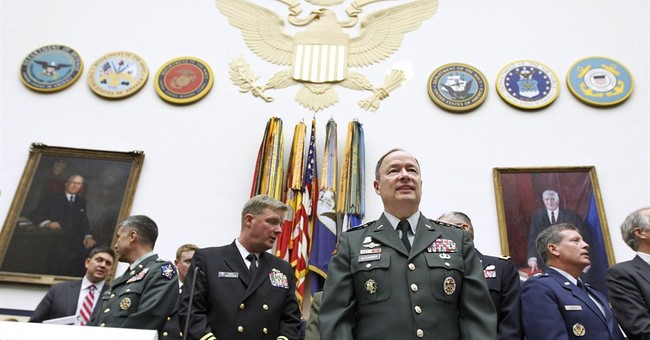 Editor’s Note: This column was coauthored by Bob Morrison.

Mikey Weinstein and his militant atheizers in MRFF (the so-called Military Religious Freedom Foundation) are boasting of their ability to crush any outbreak of Christian expression in the military. Mikey and MRFF proudly call CAIR their "allies." CAIR is the Council on American-Islamic Relations. CAIR, as the former federal prosecutor Andrew C. McCarthy has noted, has close ties to Hamas. [The Grand Jihad, by Andrew C. McCarthy, p. 160.]

Hamas is the Palestinian branch of the international group, Muslim Brotherhood. These ties were exposed in the Holy Land Foundation trial, in which, McCarthy informs us, CAIR was named by the federal government as an unindicted co-conspirator. Together, these atheizers are joining with jihadists to form a New Axis.

What is missing in the ugly battle over religious freedom in the Armed Forces is a sense of history. How is it that MRFF views any public statement of Christian belief offensive to non-Christians? We have only to consider the First Summit. When President Roosevelt and Prime Minister Churchill met in August. 1941, the U.S. was just months away from entering World War II.

The first act of these great world leaders was to join in worshipping God. On board the HMS Prince of Wales, in the dark and frigid waters of Placentia Bay, Newfoundland,Franklin Roosevelt and Winston Churchill joined more than 4,000 American and British sailors in singing “Onward Christian Soldiers.”

Against whom were those soldiers and sailors fighting? Against the Hitler menace, against Nazidom. Or, as Churchill famously called it, nozzie-dom. Adolf Hitler was even then murdering Jews in Germany and in occupied Europe. And Hitler’s legions threatened the Jewish homeland in Palestine.

The Grand Mufti of Jerusalem gave strong his support to the rise of the Muslim Brotherhood. The Mufti—an Islamist leader--was so taken with Hitler that he went to Berlin. There, he spent the entire war broadcasting to fellow Muslims, inciting them to murder Jews in the Middle East. There, the Mufti help recruit Muslims for the Hitler SS.

The first man to envision flaming towers collapsing in Manhattan was not Osama bin Laden. It was Adolf Hitler, who even then viewed Manhattan as a hostile territory dominated by Jews.

Churchill and Roosevelt on board that great warship reaffirmed the deepest values of our peoples as they stood against the evil of Nazidom. They knew that freedom required a strong foundation—and that foundation was to be religious liberty.

That’s why FDR provided his own strong endorsement of the millions of Bibles distributed to the military in WWII. That’s why President Roosevelt strongly defended religious liberty and spoke of “freedom from fear” as a war aim.

Today, MRFF boasts of striking fear into our military leaders. Mikey Weinstein thinks that open Christians are seditious, even traitors. He wants hundreds of them prosecuted in our military.

But Mikey Weinstein shows no understanding of all this as he aligns with CAIR. As confirmed by the

In October 1998—months after Osama bin Laden had issued his first declaration of war against the United States and had been named as the chief suspect in the bombings of two U.S. embassies in Africa—CAIR demanded the removal of a Los Angeles billboard describing Osama bin Laden as "the sworn enemy," finding this depiction offensive to Muslims. CAIR also leapt to bin Laden's defense, denying his responsibility for the twin East African embassy bombings. CAIR's Hooper saw these explosions resulting from "misunderstandings of both sides."

Yet MRFF calls CAIR their “ally” and joins with them trying to enlist Secretary Hagel in their drive to suppress Christians. Mikey Weinstein has formed with CAIR a New Axis whose only real point of unity is their mutual hostility to Christians.

We must push back against this New Axis. We must not allow these militant atheizers and apologists to strip away the very freedoms that were secured for us by generations of

We need to support efforts in Congress to protect religious freedom in our military.

We need to speak up when religious freedom is crushed by a few noisy militants claiming to represent a broad swath of Americans.

Go to any military cemetery. There, you will find abundant evidence that Christians and Jews together have fought for this country from its beginnings. The attempts by the New Axis, by Mikey Weinstein, MRFF and CAIR to suppress the truth to which those gravestones bear witness must not prevail.