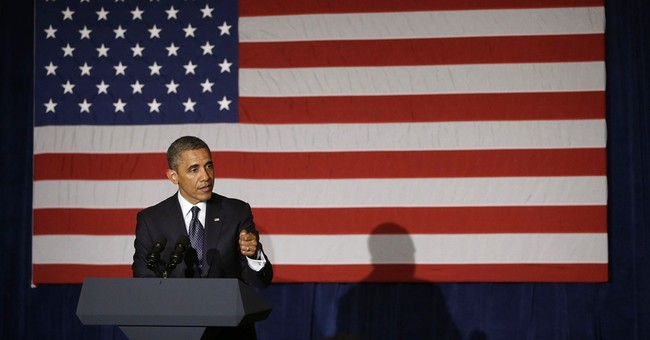 President Obama has made good use of his sense of humor. He has often used his wit to disarm his critics. He has, we admit, a sly sense of humor. And it serves him well. He loves to expose his critics to ridicule. He’s actually much more appealing—and politically more successful—when he deploys humor against his opponents.

He recently gained laughs at the expense of his embattled Attorney General. At the White House Correspondents Dinner, a must show event for Washington’s liberal elites, the president noted that he’d gotten in some trouble referring to a comely California lady as “America’s best-looking Attorney General.” “Who knew Eric Holder was so sensitive?” the president jabbed. He got a good laugh too.

Of course, at that time, few of the assembled journos realized that sensitive Eric may have been monitoring their own phone calls and email accounts. The joke may have turned on the jokers.

Our favorite presidential prod was when Mr. Obama spoke of his second-term blues. He poked fun at the passage of the years and the aging in his own presidential portrait. His hair is notably more gray than it was before, say, Obamacare was approved by the Supreme Court.

“I’m not “the strapping young Muslim socialist I used to be.” ” the president said, getting a huge laugh from the press. The very idea. Why, everyone knows that socialists and Muslims are mutually exclusive. Islam is a religion and Socialism is officially anti-religion.

Well, they’re right about that. Karl Marx called religion “the opiate of the masses.” He regarded it as an “epiphemenon.”

After the post-Reformation fragmentation of religion, where religion is no longer able to play the role even of a fake community of equals, the state fills this need by offering us the illusion of a community of citizens, all equal in the eyes of the law. But the state and religion will both be transcended when a genuine community of social and economic equals is created.

Lenin went even further. The original Bolshevik revolutionary said “any religious sentiment, however slight, is unutterably vile.” He went on to persecute the Orthodox churches in Russia, pulling down their great onion-domes and murdering their priests.

It would seem, therefore, that you can’t be both religious and a socialist. But that word failed to get to some of the leading Arab socialists of the last fifty years. The Middle East long hosted a list of local despots who claimed not only to be good Muslims, but also strapping young socialists.

Egypt’s Gamal Abdel Nasser was the first of this crew. He and his fellow colonels overthrew the enormous, decadent King Farouk in 1954 and seized power in Egypt in a military coup. Libya’s Muammar Gaddafi followed in Nasser’s wake by overthrowing Libya’s King Idris in 1969. He issued his own little Green Book, an obvious knock-off of China’s Communist Chairman Mao and his “Little Red Book.” Green being the recognized color of Islam, Gaddafi commenced more than forty years of dictatorial rule. Iraq’s Saddam Hussein came to power as a member of the Ba’ath Party, a local mix of Islamic and socialist concepts. Ditto Syria’s Hafez al-Assad, the late father of the current dictator, Bashar al-Assad.

It is true that socialism is inconsistent with any religion—or any economy, for that matter. Almost every Arab state that embraced the weird concoction of Islam and socialism found economic dislocations of a severe kind. If it had not been for the region’s vast oil reserves, starvation would surely have been their lot.

President Reagan used to joke about socialism and religion, too. He was actually the first president who not only pointed to the “machinations of an evil empire,” but who also made the effort to mock it. He joked that if socialism was really applied in the Arab world, they would soon run out of sand.

His best joke on socialism and religion was this one: Reagan said socialism would surely work in heaven, but they don’t need it. And it also works in hell, but they already have it.

President Reagan knew enough not to tell that joke at a White House Correspondents Dinner. He knew they wouldn’t get it.

Maybe the best joke for them about heaven and hell for the journalists would be this one:

You’re a reporter going before Mr. Obama’s Independent Payment Advisory Board. You want them to pony up for your heart bypass operation.

You: I guess you’ll need my Social Security number.

IPAB: That’s OK, Mr. Pressman, we already have it.

You: Well, then, let me give you my address.

IPAB: We have that, too, Mr. Pressman, we got it from your telephone records.

You: Well, can I give you my EKG print-out, so you can see that my heart really needs this bypass operation?

IPAB: Don’t stress yourself, Mr. Pressman. We will get that one, too—as soon as Eric Holder is finished looking at it.

What? You say that’s not really funny? Maybe not, but it is how socialism works—in Hades!