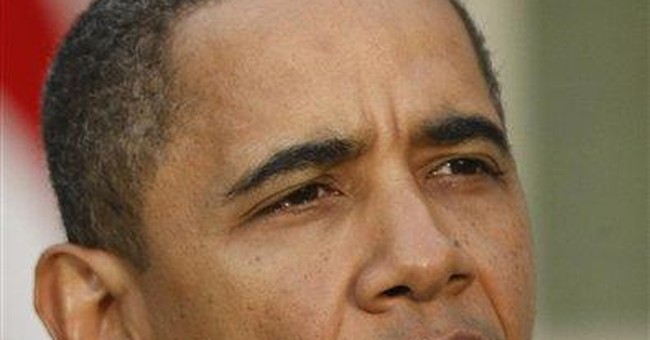 The ruling (barely) Palestinian party on the West Bank has just about lost patience with President Obama. That didn't take long. The Fatah "party" is the creation of Yassir Arafat, the Nobel Peace Prizewinner who invented airline hijacking for terrorist purposes. Arafat is dead, of course, and his Nobel Peace Prize was stolen when Hamas--the even deadlier terrorist outfit--overran his house in Gaza. But Arafat's loyal lieutenants were expecting a lot more from President Obama than he has yet delivered.

They are eager to spend the $900 million in U.S. taxpayer funds that Obama and Secretary of State Hillary Clinton have pledged to them. That money will be spent on "humanitarian" projects, we are told. Of course, Fatah has been known to transport weapons in ambulances to the hospitals where they cache them. They name schools after suicide bombers and hold assemblies in those schools where the kiddies dress up as suicide attackers. And not just on Halloween.

But impatient Fatah has issued a "document." They say Obama has failed their test. Here's part of what Fatah said:

'All hopes placed in the new US administration and President Obama have evaporated" Obama "couldn't withstand the pressure of the Zionist lobby, which led to a retreat from his previous positions on halting settlement construction and defining an agenda for the negotiations and peace."

The Obama State Department was quick to reply:

"Our commitment to the Palestinian people remains strong," a State Department official responded, adding that American opposition to settlements remained in place: "We continue to emphasize that America does not accept the legitimacy of continued Israeli settlements."

As Israeli writers have pointed out, the Obama administration's condemnation of Israel's settlements in lands the Jewish people have lived on since biblical times seems to them a bit odd. The United States, after all, is comprised of territories we bought from the French and captured from the Mexicans and includes lands where we pushed the Indians away.

But let's forget that. Can some experienced diplomat at the Obama State Department please explain why we have a commitment to the Palestinian people? They're the ones who danced in the streets, fired off their rifles in the air, and gave candy to their children when the Twin Towers fell. Can that wise Obama appointee explain why we want to give such people $900 million of Americans' hard-earned money?