Dear Media: Yes, Abortion Does Have a Smell

Katie Yoder
|
Posted: Sep 02, 2020 12:01 AM
Share   Tweet
The opinions expressed by columnists are their own and do not necessarily represent the views of Townhall.com. 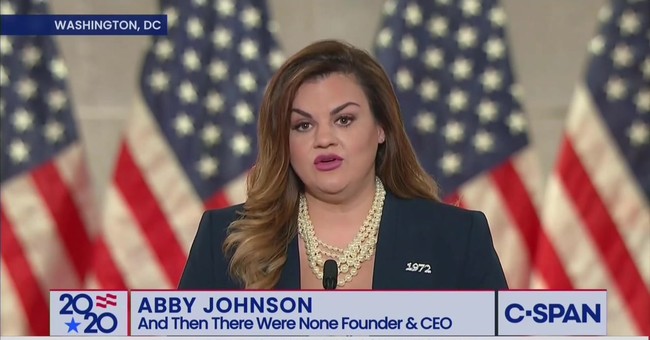 Yes, abortion has a smell, pro-life leader Abby Johnson confirms. And it isn’t a pleasant one.

Johnson, a former Planned Parenthood director turned pro-life advocate, captured the attention of millions of Americans when she revealed that abortion has a smell during her speech at the Republican National Convention (RNC). But her address, delivered on August 25, also attracted the condemnation of many in the media. In a statement for this column, Johnson responded to media critics – and further detailed the “death smell” of abortion.

In the middle of her RNC speech, Johnson, the founder of And Then There Were None and Pro-Love Ministries, told the story of the moment that changed her life: when she was asked to assist with an ultrasound-guided abortion at Planned Parenthood.

“Nothing prepared me for what I saw on the screen – an unborn baby fighting back, desperate to move away from the suction,” she remembered. “The last thing I saw was a spine twirling around in the mother’s womb before succumbing to the force of the suction.”

“For me, abortion is real,” she added. “I know what it sounds like; I know what abortion smells like. Did you know abortion even had a smell?”

Many in the media unabashedly attacked Johnson for her comments.

“No, abortion doesn’t ‘have a smell,’” argued Washington Post columnist Monica Hesse. She knew this, she said, because “As a reporter covering women’s health care, I’ve witnessed at least 20.” Plus, her “friends have had them.”

According to Hesse, “Abortion clinics smell like all medical clinics: antiseptic, rubber gloves, bleach — plus the occasional batch of cookies dropped off by a grateful patient.”

“There is a generic medical odor, chemicals and perhaps a whiff of blood,” she admitted, “but nothing unique to the procedure.”

She went so far as to say she knew Johnson’s true intentions.

“Johnson had to make abortions about telltale smells and twisted spinal cords and the rights of fetuses, because it was the only way to hide that what she wants the government to do is ignore the rights of women,” she insisted.

Except for women in the womb, that is. And the thousands of women who regret their abortions.

“My abortion did have a smell,” she wrote. “It smelled like the perfume the kind, thoughtful, capable nurse was wearing as she held my hand during the seven-minute surgical abortion.”

“But mostly,” she concluded, “if there’s a smell to abortion, for me, it is the scent of my sons' heads as I held and kissed them for the first time—two perfect boys I never would have had or had been able to adequately parent if it wasn't for my abortion.”

But Johnson had a ready response for media figures who claim that abortion has no smell.

“Really?” she asked in a statement for this column. “‘Media figures’ have intimate understanding of abortion? They know better than a former abortion clinic director? They have been inside the POC [Products of Conception] room? They have dumped out jars of blood and body parts into glass baking dishes in order to look for arms and legs of aborted children?”

Their rush to question her experience astounded her.

“They have no idea what the reality abortion actually looks or smells like,” she urged. “Abortion has been so romanticized and glamorized by the likes of ‘media figures,’ they wouldn’t know the reality of abortion if it hit them square in the face.”

She went on detail the smell of abortion – the smell that she called attention to at the RNC.

“The smell of abortion is one that is almost impossible to describe,” she said. “But for those who have worked in the industry, when you think about it, it’s a memory that will never leave your senses.”

“It smells like blood,” she stressed. “Like iron. Like a penny that has been soaking in water for a long time coupled with the smell of meat. But it’s also mixed with a hint of decay. A death smell. Almost sweet, but rotten. Blood, decay, death, tissue.”