Washington Nationals Go to Bat for God: He ‘Never Fails’

Katie Yoder
|
Posted: Nov 01, 2019 8:39 AM
Share   Tweet
The opinions expressed by columnists are their own and do not necessarily represent the views of Townhall.com. 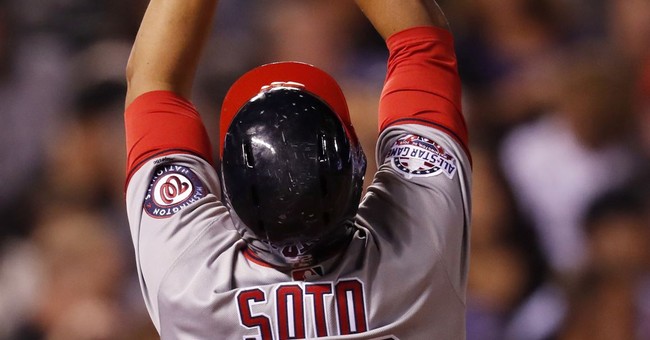 For many of the Washington Nationals players, God is their base.

The Washington Nationals won the World Series – for the first time in team history – after defeating the Houston Astros, 6-2, on October 30. While the team lives and breathes baseball, some of the players, from Juan Soto to Gerardo Para, center their love for the sport on God.

For his part, 21-year-old Soto praises God both in interviews and on social media.

“It’s a blessing from God, to be here in the big leagues and play baseball like I have,” he revealed to reporters on October 21, according to Sports Spectrum. “I never thought I’d be this talented of a player.”

During this season, CBN reported, photos showed the outfielder kneeling – in prayer – before games with his teammate Victor Robles. Soto also prays to God with his family, CNSNews.com reported.

“And we told Him that we just need his help,” he told one reporter at the beginning of October. “You know, go help, and right now and get opportunity and just, get on it.”

God makes several appearances on Soto’s Instagram account too. On October 16, one of his Instagram captions read, “Para ti mi Dios sea la gloria,” or, “For you, my God, be the glory.”

Many of the photos show his hands held up in praise and prayer.

“Dios nunca falla” or “God never fails,” he wrote as a caption for one such photo last year. And, on October 10, he quoted James 4:10: “Humíllense delante del señor, y El los enaltecerá” or “Humble yourselves before the Lord, and He will exalt you.”

Like Soto, Victor Robles is public about his faith. The 22-year-old center fielder’s Twitter bio reads, “#GodInFront.” And, when he missed five games earlier this year due to a strained hamstring, he expressed hope instead of despair – because of his faith.

“I had a lot of faith in God and I knew that he was going to heal me as quickly as possible," Robles said, according to USA Today.

Third baseman Anthony Rendon also shares his faith on social media. In an Instagram video from last year, the 29-year-old urged that being a Christian was his priority.

He added, “If I just try to stay in the Word and try to surround myself with good people and have good community, I think that will just guide me on that path.”

God has come up in other interviews, too.

“You want to plan for the future,” Rendon told the Washington Post last year. “But I’ve come to learn your plans don’t always come to fruition. Obviously, with my faith, too, I don’t want to seem like it’s all about me, me, me. It takes away from what I do for Him, for the Lord.”

According to 32-year-old outfielder Gerardo Parra, even his walk-out song is about God. During an interview with 106.7 The Fan, Parra revealed why he chose “Baby Shark” – now the Nationals’ unofficial anthem – as his song earlier this year.

"Yes, my heart. Yes, my heart and God," Parra said. "That's the only people that talked to me before I did that.” In an interview with the Washington Post, he added of the song, “I think God send to me.”

It’s a song he knew well, because his 2-year-old daughter, Aaliyah, likes it, the Christian Post reported.

As a whole, the team has a Catholic chaplain: Monsignor Stephen Rossetti. On October 21, the priest told Catholic News Service that he celebrates Mass with the players.

"I gave a homily to the guys at Sunday Mass a few weeks ago and I said that the virtue of hope is so important to all of us because all of us have times in our lives when times get tough and we need to realize that God is still with us and loves us – so don't give up hope and stay in the fight," he said.

He also serves the players who aren’t Catholic.

"Many of the guys who are not Catholic very much appreciate the presence of a priest and ask you to pray for them so I'm always blessing them and blessing their bats and praying for them when they're ill,” he added. “It's a nice ministry to be able to walk with them, whether they win or lose.”

This time, they won. And, as some of the players might add, they didn’t do it alone.