In Sleazy DC, Mike Pence's Respect For His Wife and Professional Women Should Be Applauded

Katie Pavlich
|
Posted: Mar 30, 2017 12:30 PM
Share   Tweet
The opinions expressed by columnists are their own and do not necessarily represent the views of Townhall.com. 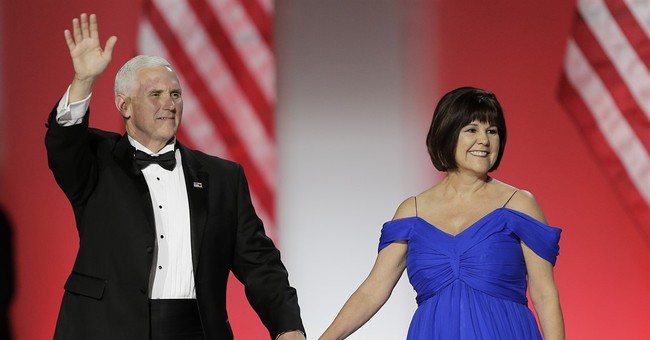 Yesterday the Washington Post published a story about Vice President Mike Pence and his relationship with his wife, Karen Pence. The big headline? He won't eat alone with women who aren't his wife and will not attend parties serving alcohol without her.

"In 2002, Mike Pence told the Hill that he never eats alone with a woman other than his wife and that he won’t attend events featuring alcohol without her by his side, either," the Post reported.

Cue the meltdown. This, somehow, has been twisted as "extreme," with some on the left comparing his actions to Sharia Law. In actuality Pence is smart and does a service not only to his wife, but to professional women working inside the Beltway. His decision to err on the side of respect has certainly paid off.

Before becoming the governor of Indiana in 2013, Mike Pence served as a U.S. Congressman for over a decade. With his wife by his side and a clean personal record, his career has taken him all the way to the White House.

Washington D.C. is often a sleazy, filthy town. The stories you hear about smoky backrooms are true. Go to any D.C. restaurant at happy hour and you'll see scores of married men surrounded by and engaged inappropriately with younger women who are not their wives. This city is a place where a small, but vicious and significant population of men and women crave power. They will stop at almost nothing to get it, which includes breaking up marriages. There are 50,000 Ashley Madison accounts with a D.C. address, making the nation's capitol number four in the country for infidelity. Right across the river and bordering D.C. is Arlington, Virginia, which comes in at number five.

In the wake of the Clinton and Condit intern scandals, you’d think Washington men would be wary of chasing young women, even ones as charming and alluring as Diana. You’d be wrong.

The Capitol buildings ooze sexual tension. The excitement begins once you pass the security guards. The windowless white marble corridors are a labyrinth in which you are isolated from the outside world. A “bubble” is how Diana puts it.

In the corridors you can hear little pump heels tap-tapping for miles, so predators know when the prey is coming; suddenly a congressman swings out from his office, dressed and groomed like a James Bond villain, usually flanked by an assortment of aides, all clutching files with the congressional logos firmly facing out, to remind you you’re in the presence of power. The congressman stops and stares up, down. He takes his time.

This happens again and again, even on the second floor of the Rayburn building, where Gary Condit’s office is located, a chair and a handful of media outside. But the office sits sepulchral and empty, its occupant has long since been moved to a secret location.

Diana gets checked out all the time. “It’s just blatant. They don’t make any effort about hiding it,” she says. “They’ll start out conversations in elevators in the morning: ‘How are you? Who do you work for? Oh, you’re new around here. What are you doing for lunch?’ It’s just very bizarre and very forward.”

Bill Clinton spent far too much time alone with women who were not his wife. Former Speaker Newt Gingrich is on wife No. 3 after spending ample time alone with other women in his office. Congressman Mark Sanford admitted to an affair in 2009 after visiting Argentina (where his now ex-wife did not live) enough times to spark suspicion. Biographer Paula Broadwell ended up cheating on her husband and two children with a married General David Patraeus after intimate meetings over dinner.

The list goes on and on. Because of human nature, many long hours alone with the opposite sex leads to infidelity. We should accept this reality so we can avoid it.

And no, this isn't to say everyone living or working in Washington D.C. should be put into the same category as Newt Gingrich or Bill Clinton, but the point is that it exists and should be avoided at all costs. And by the way, it's never the men who suffer career consequences for this type of behavior--see Monica Lewinsky or Paula Broadwell, for reference.

With a huge target on his back, Pence made a decision to respect his wife and avoid even the appearance of scandal. In return, he inoculated himself against any hint of doubt arising if he were ever accused of having an affair by tabloids or even reputable newspapers. He does women working in his office a favor by not putting them into an awkward position like so many congressmen and D.C. types do.

"Hey, lets grab a drink tonight night and talk about work" and "Are you available for dinner Friday so we can go over some projects?" are typical lines fed to young women starting their careers by established men in DC with ulterior motives. The smart ones quickly realize after-hour dinner or drink meetings with the opposite sex oftentimes aren't really about work and that they should stick strictly to a booze-free lunch for professional meetings. Pence never put young women in the position to wonder what his motives were.

Men in general, but especially powerful men in public positions, should respect and learn from Pence's boundaries. This doesn't mean they have to make the same decisions about how to handle professional situations, but understanding why Pence behaves the way he does is helpful with navigation. He has enormous respect for his wife and the women he works with, which is why he chooses not to put any of them into a position that could be perceived as compromising.

Finally, finding a compatible, loving and respectful life-long partner is a miracle. Marriage should be aggressively guarded, especially in a society where divorce is rampant and infidelity is simply viewed as a "mistake" rather than a decision.

In Washington D.C., the stakes for marriage are high and tested often. Pence knows that and acts accordingly.