Katie Kieffer
|
Posted: Oct 08, 2018 12:01 AM
Share   Tweet
The opinions expressed by columnists are their own and do not necessarily represent the views of Townhall.com. 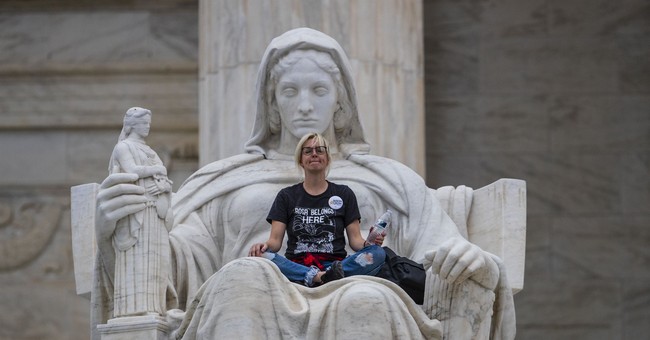 Women are angry at Brett Kavanaugh. To them, I ask: do you know why you’re angry?

Suicide is on the rise in America, especially among our country’s girls. According to CDC data, suicide among teenage girls rose 70% in the past decade. This is a 40-year high. Across all genders and ages, suicide has increased 28% since 1999.

I propose the uptick of suicide in America—especially among our young women—is connected to the war against men that is unfolding on the steps of the U.S. Capitol. Because, as the great G.K. Chesterton wrote, all wars are motivated by “love” or “hatred,” and never by economics.

Why don’t our girls feel loved by American culture?

American women are freer and have more opportunities than ever. Economically, it’s old-news to report Pew’s 2013 findings (confirmed by Gallup in 2018) that Millennial women are at near-parity with men in terms of salary. Female CEOs of S&P 500 companies actually make more than men. Unfortunately, the so-called feminist movement never reports these truths.

But, more than ever, women are screaming in the streets as if they have no opportunities and no respect from society, especially men. Many of these women may indeed have been hurt by the cruel behavior of a man. But angry words will not heal their wounds, or reform their offenders.

Shaking fists, screaming and stamping—young women are shouting: “We’re angry! Kava-Nope! We believe all survivors!” My concern is that they have given up on learning American history, including whyour founding fathers risked everything—including death—for the sake of establishing a country that upholds Biblical values and true freedom.

I believe these women are unhappy because they do not feel loved. Love is based in truth and selflessness. And our liberal, secular society lies to our youth—telling them that they will only know they are “loved” when they have three things: 1.) Pleasure, 2.) Power, and 3.) Prestige.

Because this trifecta—pleasure, power and prestige—is very hard to obtain and always leaves us wanting more, when we seek these “goals” we end up feeling worthless.

I recently read two great documents on intolerance: Everlasting Man by GK Chesterton and A Plea for Intolerance by Ven. Archbishop Fulton Sheen.

“America… is suffering from tolerance,” Sheen writes. We see this in “the readiness of many minds to accept as an authority in any field an individual who becomes a famous authority in one particular field. …[But] there is a limit to the transfer of training, and no one who paints beautiful pictures with his right hand can, in a day and at the suggestion of a reporter, paint an equally good one with his left hand.”

Chesterton adds that Christianity “was intolerable [by the world] because it was intolerant [of the world]. …It did not try to destroy all that creation of gold and marvel, but, it imagined a world without it.”

Sheen defines intolerance as admitting the truths that we see before us and refusing—as is so common today—to ask a celebrity like Madonna or a college professor like Dr. Christine Blasey Ford what she thinks about political policy, and assume she’s correct because she’s an accomplished singer or academic.

Our young girls have fallen for the lie that an Instagram celebrity knows more about life than their parents, pastors or grandparents.

Last Friday, I joined two other women in prayer before an abortion clinic. In an hour’s time, about 20 women walked in—along with their boyfriend or girlfriends—for an abortion. None looked happy or confident in their decision.

One young man came up to us to talk. Neither he nor his girlfriend wanted the abortion, but they worried about finances. Tears welled up in his eyes. He was pushing a beautiful baby girl in a stroller but said he felt unworthy to father another child due to his past mistakes. We shared hope and resources with him. He and his girlfriend talked together in private and ultimately decided not have the abortion that day, even after making a three-hour drive (each way) to the clinic.

We must start telling our young women and men the truth about life and love. Deep down, Americans are not crying out for more laws but more love.

When we are intolerant (i.e. tell the truth and love each other generously), we will also have less anger in America. Move on, feminists. Come on, love.